Cheniere Energy Partners LP (NYSE: CQP) hasn’t raised its distribution since its initial public offering (IPO) in 2007; the MLP’s only source of revenue stems from long-term contracts to import liquefied natural gas (LNG) into the US.

With US natural-gas production overwhelming domestic consumption, demand for this imports has cratered. Although the MLP will add export capacity to its Sabine Pass facility over the next few years, the stock has already priced in any potential distribution growth.

Ferrellgas Partners LP (NYSE: FGP) has paid the same quarterly disbursement to unitholders since its IPO in the mid-1990s. Like other wholesale propane distributors, the MLP’s growth story hinges on offsetting customer attrition to natural gas via bolt-on acquisitions of smaller operators.

Although the company has become more aggressive in the acquisition market and covered its distribution by 1.1 times over the 12 months ended Sept. 30, 2013, management won’t consider increasing the distribution until the coverage ratio hits 1.3 times–an unlikely scenario.

A cold winter should help Ferrellgas Partners’ results in its fiscal first quarter ended Dec. 31, 2013, though the MLP could suffer some margin compression if it’s unable to push rising propane costs through to consumers.

The propane distributor’s stock rallied 35 percent last year, largely because the MLP’s cash flow and distribution coverage improved relative to its prior fiscal year, when the no-show winter of 2011-12 weighed heavily on results. 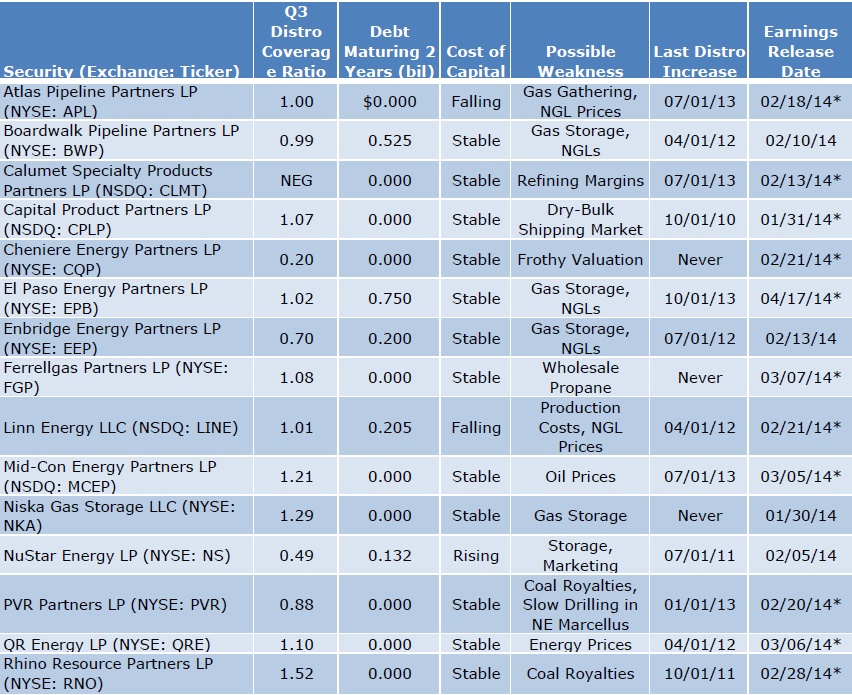 Our table highlights 15 MLPs that haven’t raised their distributions on a regular basis. Our list excludes Northern Tier Energy LP (NYSE: NTI), Petrologistics LP (NYSE: PDH) and other names that pay a distribution that varies with their quarterly cash flow.

Here’s a brief look at each of these MLPs and the risks and opportunities associated with each name.