However, the usefulness of the horizontal rig count as a predictor of US hydrocarbon production has deteriorated because of the huge efficiency gains that have occurred as operators hone their production techniques and shift from a testing phase to more of a manufacturing-based approach in the nation’s most prolific shale plays.

During a conference call to discuss Baker Hughes’ second-quarter results, CEO Martin Craighead highlighted some of the insights analysts can glean from this new data set:

As industry trends evolve, you can expect new features and information sources to be added to the Baker Hughes well count index periodically. We can see from the data, for example, that drilling efficiencies vary by basin. In the Williston, the Marcellus, and the Eagle Ford, we’re seeing about 20 percent more wells per rig compared to this time last year. Whereas, in the Permian [Basin], wells per rig have hardly changed.

Additionally, the Baker Hughes well count shows seasonality that wasn’t evident in the rig count alone. During the winter months, the wells per rig slows due to poor weather conditions. For example, the wells per rig dropped by 15 percent in the Granite Wash this past winter before rebounding later in the spring. So, it’s this seasonal rebound and the underlying trend of drilling efficiencies that explains why we saw a 3 percent increase in the Baker Hughes well count during the second quarter despite the rig count remaining absolutely flat.

Even though Baker Hughes’ publicly available well count data only goes back to the first quarter of 2012, the gains in drilling efficiency are still readily apparent. Check out this graph tracking the average number of wells drilled per rig in 14 of the biggest unconventional oil and gas plays. 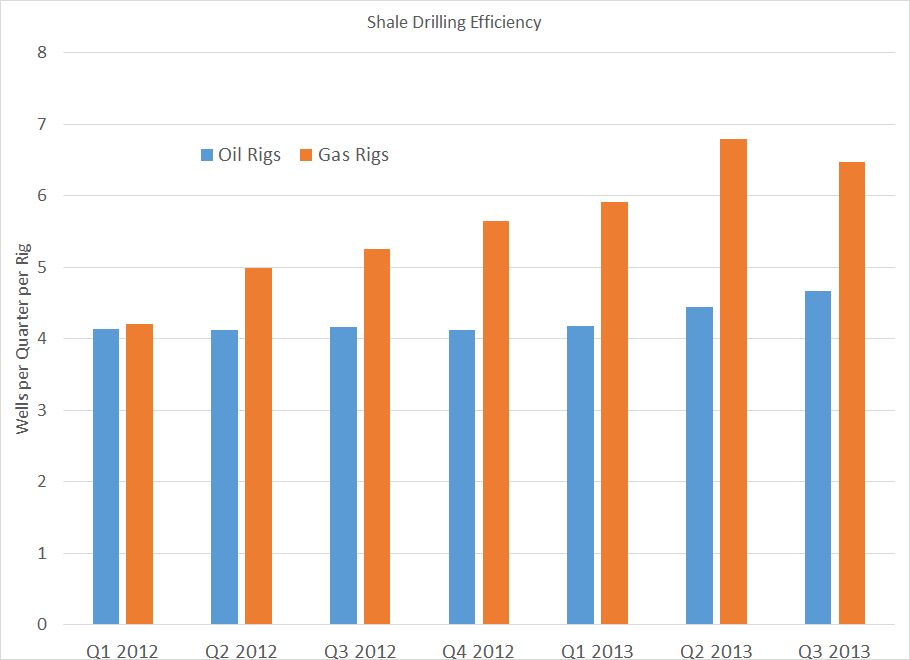 The average rig operating in a liquids-rich field drilled 4.12 wells in the second quarter of 2012, compared to 4.67 in the third quarter–an efficiency gain of 13.4 percent over the past 15 months. However, these improvements pale in comparison to trends in the six gas-focused plays included in our survey; the typical rig in these fields drilled 6.47 wells in the third quarter–up almost 30 percent from the second quarter of 2012.

These statistics help to quantify recent trends in natural-gas production, rig counts and prices. Over the 12 months ended June 30, 2013, the rig counts in the six plays that we classified as dry-gas fields plummeted by 36 percent. But this decline in the rig count produced only a 15 percent drop in the number of wells drilled in these fields.