Although the Alerian MLP Index outperformed the broader market dramatically in 2009, 2010 and 2011, the S&P 500 generated a superior total return in 2012 and is neck and neck with the benchmark index for publicly traded partnerships thus far in 2013. 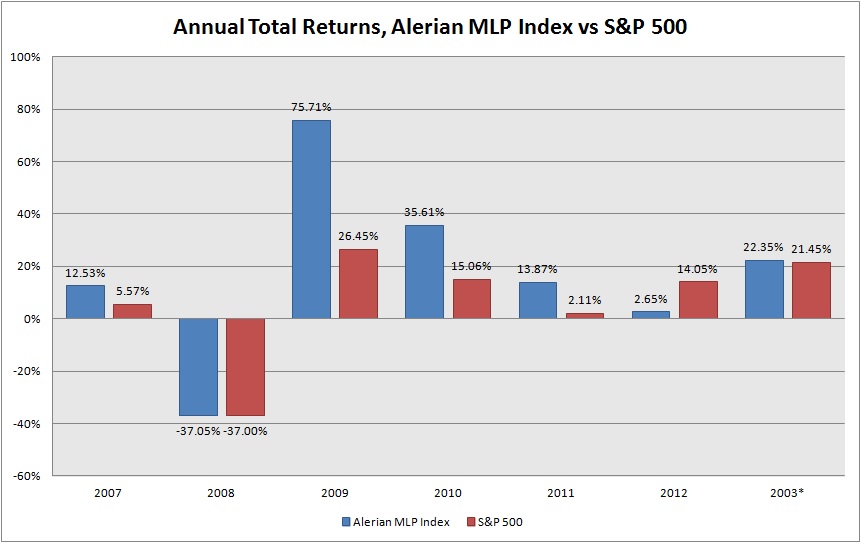 What has precipitated master limited partnerships’ (MLP) recent underperformance? With 10 of the 99 energy-focused names in this space hitting a 52-week high this year, investors likely took advantage of concerns about rising interest rates to harvest some of their winners–a perfectly normal phenomenon.

As my colleague Elliott Gue explained at length in Don’t Fight the Fed–Listen to It and The Truth about the Fed’s Great Taper, the US central bank remains committed to a gradual tightening of monetary policy; investors expecting income-oriented fare to be blindsided by a sudden upsurge in interest rates likely will be disappointed.

At the same time, the universe of energy-focused MLPs includes a number of names that should be able to grow their distributions at an above-average rate in coming years. Demographic trends should also lend some support to MLPs and other dividend-paying equities. As the generation of baby boomers ages and looks to convert a lifetime of savings into a reliable income stream, MLPs and other traditional income stocks should remain popular.

Looking at the performance of various segments within the MLP space, upstream (oil and gas producers) and downstream (refiners, fuel wholesalers and petrochemical outfits) operators have fared the worst this year.

Upstream names have struggled with the depressed price of natural gas liquids and concerns about how some account for their maintenance capital expenditures, with Linn Energy LLC (NSDQ: LINE) emerging as the poster child for both of these issues.

Meanwhile, investors sold off units of Northern Tier Energy LP (NYSE: NTI) and other MLPs that own refineries, as shrinking price differentials weighed on profitability and distributable cash flow.

Upstream operators have received some good news in the form of improving propane and butane prices, though investor sentiment toward the group remains weak. We would continue to steer clear of most MLPs that own and operate refineries, especially those that pay a variable distribution and have a highly concentrated asset base.