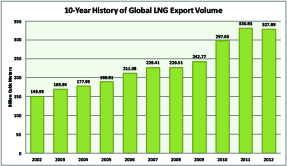 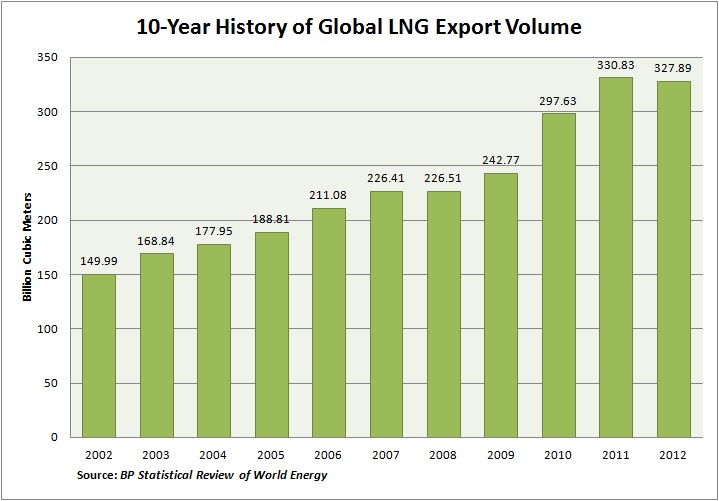 Over the previous three years, the global LNG market had grown at an average annual rate of about 15 percent. Why did this uptrend stall out? First and foremost, the addition of new liquefaction capacity–facilities that cool natural gas to minus 260 degrees Fahrenheit in preparation for shipment–slowed considerably in 2012.

Only one major LNG export terminal, the Pluto project operated by Woodside Petroleum (ASX: WPL, OTC: WOPEY), came onstream last year. A series of snafus prevented Chevron Corp’s (NYSE: CVX) long-awaited Angola LNG plant from shipping its first cargo until June 16, 2013; the companies involved in this endeavor had expected the plant to begin commercial operations in the back half of 2012.

This lull will continue over the next two years, with only four new LNG export terminals expected to come onstream during this period. These facilities will be able to produce up to 15.15 million metric tons of LNG per annum, equivalent to about 5.1 percent of existing installed capacity.

Algeria’s national oil company, Sonatrach, late last year completed the reconstruction of its Skikda LNG export facility, replacing the three liquefaction trains that were destroyed in a 2004 explosion and fire. Sonatrach began to ramp up operations at the facility in the first quarter of 2013.

Besides the lull in new liquefaction projects coming onstream, the industry also contended with declining demand for LNG imports, primarily in North America and Europe. 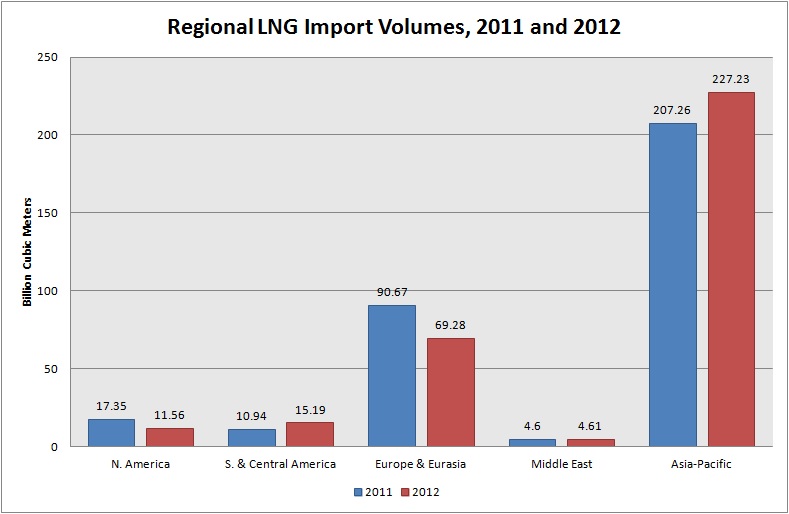 Whereas LNG cargos headed to the US and Canada have continued to drop as domestic natural-gas production from the Marcellus Shale and other unconventional basins surges, the economic slowdown in Europe and price competition from coal led to a 23.5 percent decline in this region’s imports of shipped natural gas.

Rising demand for natural gas in Asia, especially in China and India, mostly offset declining LNG import volumes in 2012. We expect this trend to continue in coming years, though investors should keep a close eye on developments in Japan, where demand surged after the incident at the Fukushima Daiichi plant prompted the country to shutter the majority of its nuclear reactors.

But with 74.7 million metric tons per annum of new liquefaction capacity expected to come onstream between 2015 and 2017, volume growth should accelerate over this period. The majority of these LNG export facilities are in Australia.

Our favorite way to play this trend is through well-established companies that own fleets of LNG carriers that transport the product from liquefaction terminals to customers.

Teekay LNG Partners LP (NYSE: TGP), for example, has ample contract coverage to insulate its cash flow against near-term weakness in this shipping market and the best opportunity to take advantage from the 2015-17 LNG boom.

In fact, the master limited partnership recently announced that Cheniere Marketing LLC had inked five-year charters for two of the shipowners’ vessels. This contract will start in 2016 and support shipments from the Sabine Pass LNG export facility on the Gulf Coast.