Breaking Down the US Onshore Rig Count 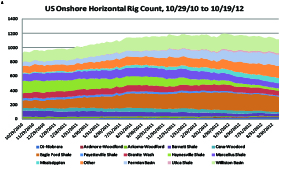 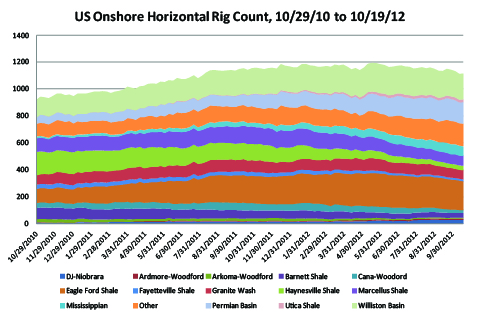 Although the level of activity has shifted considerably in individual basins,  the overall number of horizontal-trajectory drilling rigs operating in US onshore basins has remained relatively stable since the indicator breached 1,100 units in August 2011.

In aggregate, this rig count serves as a reasonable proxy of drilling activity in domestic shale oil and gas plays, a resource base that has enabled the US to grow its oil output for the first time in decades and overtake Russia as the world’s leading producer of natural gas.

Two innovations have enabled oil and gas companies to tap these formerly stranded reserves: hydraulic fracturing, which involves cracking the low-permeability reservoir rock by pumping large volumes of water into the formation, and horizontal wells, which involve drilling a lateral shaft off the vertical wellbore. Together, these production techniques unlock the hydrocarbons trapped in the reservoir rock and increase the well’s exposure to the play’s most productive horizons.

Over the past year, US onshore natural-gas production has continued to climb despite the relatively steady horizontal-trajectory rig count, prompting some analysts to focus on wells drilled as a predictor of overall production. This output growth reflects operators’ rapidly improving efficiency in exploiting these plays.

Nevertheless, breaking down the horizontal-trajectory rig count by basin reveals a key trend that energy-focused investors should monitor closely: Depressed natural-gas prices and the corresponding shift in drilling activity to liquids-rich basins from regions that primarily produce natural gas.

During the two-year period depicted in the graph, the horizontal-trajectory rig count has tumbled by 54 percent in the Fayetteville Shale, 58 percent in the Barnett Shale and 80 percent in the Haynesville Shale. Even Appalachia’s Marcellus Shale–which is widely regarded as the lowest-cost shale gas play in the US–has suffered a 27 percent drop over this period and a 42 percent decline since its peak.

In late October of 2010, these four plays accounted for about 42 percent of the onshore horizontal-trajectory rig count; today, their contribution has tumbled to 14 percent of this rig count.

At the same time, the number of horizontal-trajectory units operating in liquids-rich plays has surged. The rig count in North Dakota’s oil-laden Williston Basin climbed by 46 percent; the number of units running in the Eagle Ford Shale roughly doubled; and the rig count in the Permian Basin surged by 235 percent. Taken together, these three basins account for 50 percent horizontal-trajectory rigs that are active in US onshore plays.

With natural gas prices of between $4.00 and $4.50 per million British thermal units likely needed to prompt producers to accelerate drilling activity in gas-focused plays, we expect this balance to persist through at least 2013.

The great migration of drilling rigs to liquids-rich plays from primarily gas-producing regions has weighed on the oil-services firms’ profit margins. Not only have pressure-pumping margins collapsed in gas-rich basins, but the influx of rigs to liquids-laden areas has also put prices under pressure in these areas.