A Rational Take on US LNG Exports

The debate over unfettered US exports of liquefied natural gas (LNG) has intensified in recent months, with exploration and production companies pushing for a new demand outlet and gas-intensive industries seeking to curb these shipments.

US oil and gas producers have long coveted LNG exports as a potential release valve for the domestic oversupply of natural gas, a product of the industry’s aggressive drilling in the Marcellus Shale and other prolific unconventional resource plays.

Although surging output from US shale fields enabled the US to offset declining volumes from the Gulf of Mexico and overtake Russia as the world’s leading producer natural gas, upstream operators’ drilling success hasn’t necessarily translated into financial outperformance. Robust production from prolific unconventional fields sent North American natural-gas prices spiraling lower, while the no-show winter of 2011-12 increased this oversupply and depressed prices even further in the first half of last year. 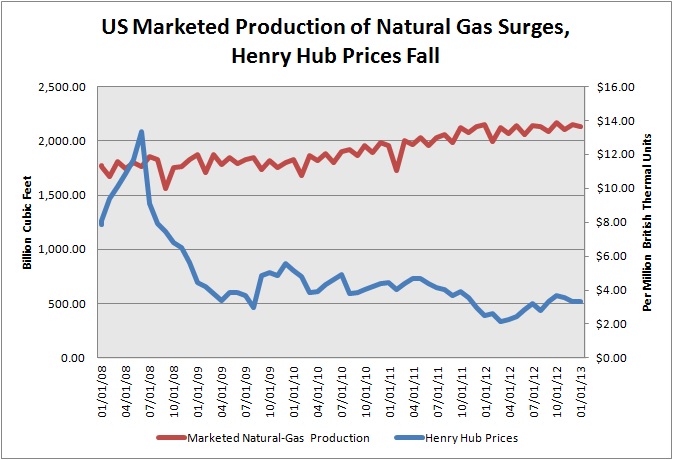 Pipeline exports of US natural gas to neighboring Mexico and Canada have surged, increasing at an average annual rate of 16 percent over the past three years. However, as we explained at length in Profit from US Energy Exports Today, the volume of cross-border shipments last year represented only 6.2 percent of US natural-gas production; average price realizations on pipeline exports have largely tracked spot prices at the Henry Hub, the delivery point for futures contracts that trade on the New York Mercantile Exchange.

Looking for arbitrage opportunities, the US oil and gas industry has pushed hard for the Dept of Energy to approve increased LNG exports via specialized tankers. A quick glance at the difference between Henry Hub prices and international prices underscores the appeal of US LNG exports to companies on either side of the trade. 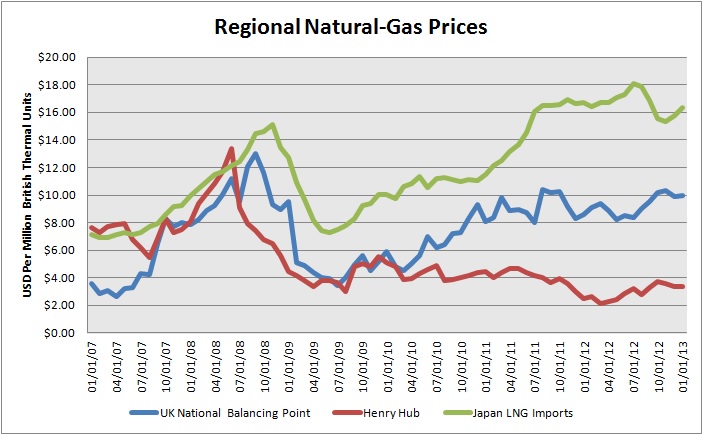 Whereas US natural-gas producers would benefit from the creation of a new demand outlet, European customers would further diversify their supply base away from expensive pipeline gas delivered by Russia under oil-indexed contracts.

At the same time, robust demand growth in China, coupled with the closure of the Japan’s nuclear reactors after the Fukushima-Daiichi disaster, has intensified competition for LNG volumes in the spot market and elevated prices to levels that incentivize producers and traders to redirect cargos from Europe to Asia.

Japan and South Korea have traditionally accounted for the bulk of global LNG demand and have borne the brunt of rising prices. Not only does a paucity of domestic energy resources force Japan and South Korea to rely on imports, but formidable geographic obstacles–the Pacific Ocean and North Korea, respectively–also prevent the nations from accessing the continental pipeline system. 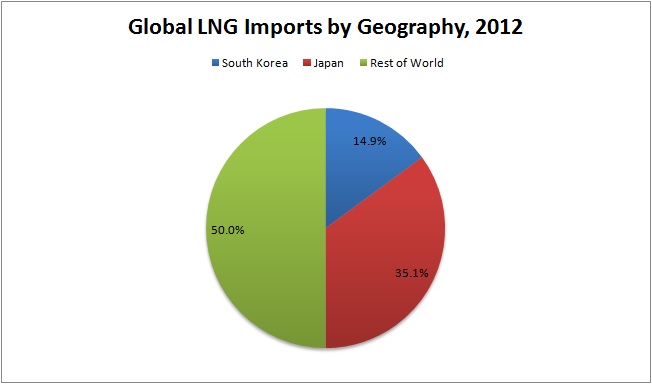 At the current Henry Hub quote and after the widening of the Panama Canal, seaborne LNG imports from the US Gulf Coast would give Japan and South Korea a degree of price relief even after liquefaction, transportation and re-gasification costs.

Access to US-produced LNG would also diversify these stranded Asian nations’ supply base, reducing their exposure to unexpected supply interruptions. Although infrastructure outages and security-related disruptions are more common, Qatar famously extended maintenance on six of its liquefaction trains in summer 2010–a move that many market participants regarded as an attempt to boost price realizations during a period of weak demand.

What stands in the way of US producers and international consumers taking full advantage of the spread between domestic natural-gas prices and prevailing levels in international markets?

At this juncture, the primary impediments to US LNG exports are ostensibly political. Section 3 of the Natural Gas Act (15 U.S.C. § 717b) stipulates that the Dept of Energy must evaluate applications to export natural gas from the US, with the decision hinging on whether the proposal is deemed to “not be consistent with the public interest.”

LNG shipments to the 20 countries with which the US currently has free-trade agreements largely meet the rubric of being in the public interest. (This exemption, however, doesn’t apply to Costa Rica and Israel.) Within this coterie of trading partners, only South Korea imports significant volumes of seaborne natural gas; however, the US free-trade agreement with South Korea didn’t go into force until March 25, 2013. Chile and the Dominican Republic also operate LNG import terminals, while Singapore expects its first liquefaction facility to come onstream in 2013.

Japan has also expressed interest in sourcing US natural gas at Henry Hub prices. Although the US currently lacks a free-trade agreement with Japan, trade representatives from both countries recently concluded bilateral consultations regarding Japan’s interest in joining the Trans-Pacific Partnership (TPP). Pending the approval of the 10 other countries (Australia, Brunei, Canada, Chile, Malaysia, Mexico, New Zealand, Peru, Singapore and Vietnam) involved in the TPP, the US would welcome Japan to the group’s ongoing negotiations, opening the door to a potential free-trade agreement and unfettered access to US LNG exports.

Meanwhile, the US Dept of Energy’s Office of Fossil Energy in 2011 placed a freeze on evaluating permit requests for proposed liquefaction terminals seeking unrestricted LNG exports, pending the release and review of two studies that the regulator had commissioned regarding the effects of US LNG exports on domestic gas prices and the economy.

This announcement occurred shortly after the agency approved Cheniere Energy Partners LP’s (NYSE: CQP) application for a permit to ship domestically produced LNG to countries with which the US does not have a free-trade agreement. Thus far, the master limited partnership’s Sabine Pass liquefaction, which is under construction and slated to come onstream in 2015, is the sole terminal to secure a coveted permit for unrestricted exports.

The US Energy Information Administration (EIA) in January 2012 issued the first of these two reports, Effect of Increased Natural Gas Exports on Domestic Energy Markets. This study analyzed 16 different scenarios and concluded that an uptick in LNG shipments to international markets would increase natural-gas prices for domestic consumers, with the rate of export growth determining the extent to which prices rise.

In early December 2012, the Dept of Energy released Macroeconomic Impacts of LNG Exports from the United States, a report developed by NERA Economic Consulting that took a slightly different tack than the EIA study. More specifically, NERA’s analysis concluded:

[I]n many cases, the world natural gas market would not accept the full amount of exports assumed in the EIA scenarios at export prices high enough to cover the US wellhead domestic prices calculated by the EIA.

In other words, domestic production costs and global demand would limit the extent to which domestic natural-gas prices would increase because of LNG exports. The report also indicated that US natural gas exports would be a net positive to the domestic economy, though certain energy-intensive industries would come under pressure.

The Dept of Energy has indicated that the agency will consider these studies, as well as the extensive public comments on the reports, in determining whether an individual application to export LNG volumes to countries with which the US does not have a free-trade agreement is in the public interest. Accordingly, the regulator has announced the order in which it will process the backlog of 19 applications for unrestricted export permits.

This lengthy list of LNG export applications that the Dept of Energy has approved or is in the process of reviewing includes a contemplated 29.93 billion cubic feet per day of export capacity–equivalent to 43 percent of US natural-gas production and almost 96 percent of global LNG imports in 2012.

The US Dept of Energy ostensibly will play a role in picking the winners by determining which projects ultimately secure permits for exports to nations with which the US lacks a free-trade agreement; the agency has disclosed that it will consider each application on an individual basis and consider the cumulative effect of previous authorizations when granting approvals. Accordingly, the projects at the top of the review list stand the best chance of gaining approval.

Although the US Congress could also play a role in shaping LNG export policy–the Senate Committee on Energy and Natural Resources recently hosted a hearing on this subject–we ultimately expect the markets to dictate which projects go ahead and which fall by the wayside. Building natural-gas liquefaction and export facilities requires a significant capital investment, especially greenfield developments; we expect the financial markets to favor projects that have secured long-term capacity reservation agreements from customers.

Moreover, US LNG export projects face significant competition from rival schemes on Canada’s West Coast that benefit from lower shipping costs relative to the Gulf Coast (see map), a supportive regulatory environment and substantial buy-in from Asian customers in the resource plays that would feed these terminals. (We’ll explore Canada’s natural-gas market and export schemes in the next installment of Energy Investing Weekly.) 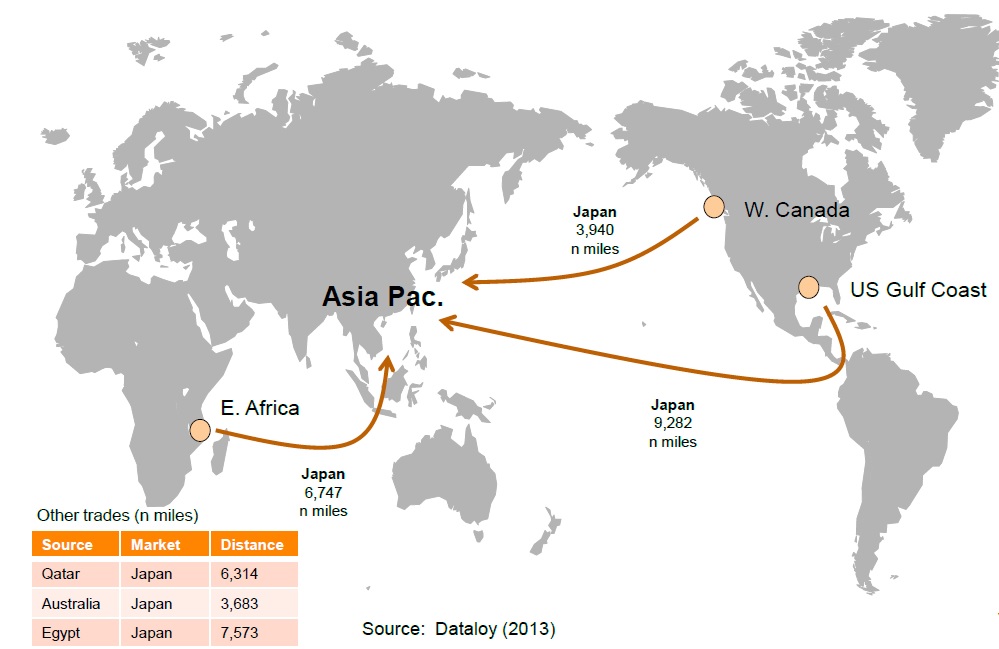 With LNG exports becoming an increasingly politicized issue, investors should expect the alarmist accounts about exporting the US’ low-cost energy advantage and the hazards of restricting the free market to predominate in the mainstream media. However, don’t be taken in by rhetoric depicting the debate as a pitched battle between Big Oil and the domestic petrochemical and other energy-intensive industries (arrayed under the banner of America’s Energy Advantage).

Expect policymakers and market forces to ensure that the US LNG exports hew to the middle path. Jim Gallogly, CEO of global petrochemical outfit LyondellBassell Industries (NYSE: LYB) and former vice president of exploration and production for ConocoPhillips (NYSE: COP), articulated as much at the company’s recent Investor Day:

If you look at the economics of LNG, you’ll see some LNG export happen; I suspect it will be fairly modest. I participated in the LNG business in the past. And if you look at the global economics of that, as soon as methane prices start to rise a bit, you’ll see a production increase fairly rapidly in the dry-gas plays, which will moderate that. So I don’t think LNG hurts us. In fact, my own personal analysis is [that] it generally helps us. We want the producer to have better pricing than they do today because we’re primarily interested not in the methane but in the liquids. So it’s a powerful engine for us going forward.