When to Hold and When to Fold

“Sell your losers and let your winners run.” This endlessly quoted Wall Street adage makes sense for traders, but doesn’t necessarily apply to income-seeking investors who care primarily about collecting a steadily growing stream of dividends over time.

The latter approach, which has served me well over the past 20 years, requires patience and the conviction that comes from understanding a company’s underlying fundamentals and growth drivers.

Let’s scrutinize the wisdom of letting your winners run. Increasing profits, strengthening demand and a rising dividend can push a stock to a sustainably higher price. But in this era of institution-dominated trading, stocks are often bid up to valuations that no longer reflect underlying growth prospects.

In these instances, the gains you’ve earned by letting your winners run can quickly become a loss when the momentum reverses. The more one of your holdings appreciates in value, the greater the proportion of your wealth that’s tied up in a single stock–a situation that can end unhappily when institutional investors take their profits.

There’s no shame in turning paper profits into real ones. When stocks reach frothy levels that exceed their fair value, it’s time to take at least a partial profit and allocate the proceeds to names that trade at better valuations. This approach even gives you the option of repurchasing the stock that you sold once its valuation returns to reasonable levels.

As for cutting your losers short, every investor endures his or her fair share of heartburn when one of their positions suffers a pullback. Selling the offending stock can provide a bit of an emotional release, even if this move locks in a loss.

However, in many instances, the further a position declines in value, the less damage the position can do to your portfolio–at that point, the market has priced in the worst news. In this situation, it’s critical to take a dispassionate view of the stock’s prospects for a potential recovery.

When a stock tumbles precipitously, investors must ask themselves three questions.

On the plus side, stocks that have suffered significant setbacks benefit from lowered expectations; if the company can right the ship, quarterly results should have no problem exceeding the consensus estimate.

Of course, some companies face insurmountable challenges–and their stocks are cheap for a reason. In the early 2000s, a number of technology stocks went to zero after the underlying businesses consistently failed to turn a profit.

Coveted by investors looking to turn savings into an income stream, these stocks can take a beating if the company is forced to slash its dividend. Such a move spurs a cascade of selling that reinforces fears that the worst is yet to come. Rebuilding investor confidence after a dividend cut is a monumental task; a reduced payout represents a tacit admission that performance failed to match management’s projections.

In these discouraging instances, investors must ask whether the dividend cut will generate enough spare cash to stabilize the business, or if this move amounts to applying a napkin to a gaping head wound.

When I first partnered with my longtime friend Elliott Gue on Capitalist Times and Energy & Income Advisor, I took a hard look at the names in my coverage universe that had either cut their dividend over the past year or were at risk of reducing their payout.

Although many of these names eventually will recover despite recent disappointments, the extended time frame for any turnaround prompted me to attach a “Sell” rating to a number of these stocks.

However, two of the downtrodden–Atlantic Power Corp (TSX: ATP, NYSE: AT) and Just Energy Group (TSX: JE, NYSE: JE)–earned Hold ratings after intensive scrutiny. Both stocks have struggled monumentally this year, with Atlantic Power plummeting by 61 percent and Just Energy giving up 28 percent of its value. Shares of both companies aren’t far removed from the all-time lows that they hit in November 2008, the height of the financial crisis.

The analyst community isn’t particularly bullish on either stock: Atlantic Power has eight Hold ratings and one Sell rating, while Just Energy has one Buy rating, three Holds and three sells. Although the short interest in each stock has declined, current levels are higher relative to many dividend-paying equities.

Insiders have loaded up on the companies’ shares in recent months, with Atlantic Power’s executives adding to their holdings by 25 percent over the past six months and Just Energy’s leadership starting to buy stock in January 2013. Meanwhile, the prices of the companies’ bonds have remained relatively stable.

Atlantic Power and Just Energy are two stocks that investors want to chuck out of their portfolios–if for no other reason than to stop looking at them in their account statement.

Here’s why I’m sticking with these stocks for now and didn’t include them in a spring cleaning that saw me downgrade seven names in my coverage universe to Sells.

Thus far, Atlantic Power has met many of the near-term benchmarks I’ve set for holding the stock:

The embattled utility on May 2 announced that the firm had completed the syndication of tax-equity interests in its Canadian Hills wind-power installation.

A few days later, Atlantic Power disclosed in its 10-Q filing with the US Securities and Exchange Commission that the firm had also entered an agreement to sell its 17.1 percent interest in the 560-megawatt Gregory cogeneration plant to NRG Energy (NYSE: NRG). This deal will enable the firm to extract US$33.7 million from an asset with little potential for leverage.

I also like the hiring of Edward Hall, a former executive with AES Corp (NYSE: AES), as executive vice president and chief operating officer. Hall worked for AES in various positions during its well-documented turnaround and has the experience needed to maximize value from Atlantic Power’s far-flung assets and strengthen its balance sheet.

Hall will spearhead a major push to improve operational efficiency and take advantage of the company’s scale. He and he rest of the management team will also tackle the challenge of adding new projects to the portfolio to stabilize cash flow and set the stage for future growth.

Atlantic Power’s recent asset sales and loan restructurings have gone a long way toward reducing the company’s debt load. Although these divestments will eat into the firm’s cash flow, these transactions have dramatically reduced the utility’s exposure to the weak wholesale power market. And after the dividend cut, cash flow generated by long-term contracts and renewable-power plants alone will be sufficient to cover the company’s obligations.

However, any growth in the dividend will hinge on Atlantic Power’s ability to increase its cash flow through new projects and acquisitions–a prospect that depends on whether the company can negotiate a waiver for anticipated breaches of covenants associated with its senior credit agreements.

Atlantic Power used the proceeds of its recent asset sales to pay off the outstanding balance on this line of credit. But tapping this source of liquidity to finance future acquisitions will require management to successfully renegotiate the terms of its credit agreement.

The company has indicated that it should have news on this front in the second half of the year. Atlantic Power’s second-quarter results, which should be released around Aug. 8, 2013, will tell us whether the firm’s cash flow will meet expectations after a string of recent divestments.

A wave of class-action lawsuits alleging that management made false and misleading statements to investors about Atlantic Power’s financial performance is another headwind. Although the burden of proof in such cases is high, the risk of an unfavorable judgment or settlement will hang over the stock.

The biggest point in Atlantic Power’s favor is the company’s high-quality portfolio of power plants, all but two of which have contracts to sell power to regulated utilities. No utility has ever defaulted on a power-purchase contract with an independent producer. Not only is the company’s asset base diversified by region and fuel source, but also only a fraction of its capacity isn’t covered by contracts with at least five years remaining. 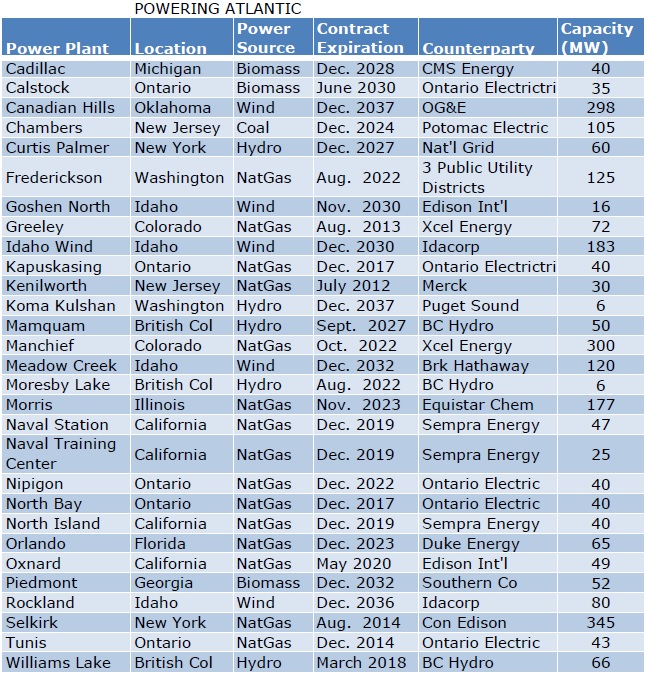 At this juncture, Atlantic Power’s survival isn’t in doubt; rather, the looming questions are whether management will be able to engineer a turnaround, when this recovery will take place and whether it will prove worthwhile for investors.

The jury is still out on all three of these questions. But shares of Atlantic Power trade at 72 percent of their book value–an extremely low bar of expectations. Although investors shouldn’t allocate new capital to this stock, the stock is a hold for those who can stomach the volatility and elevated risk.

After cutting its monthly dividend by 32 percent in April, Just Energy has targeted a payout ratio of less than 80 percent for its fiscal 2014 and a debt-to-cash flow ratio of between 3.5 and 4 times cash flow by fiscal 2016.

Over the past several months, the stock has vacillated between $6.00 and $7.00 per share, reflecting the back and forth in the press between the company and short sellers that have questioned the utility’s prospects. Like Atlantic Power, Just Energy has been tripped up by low electricity prices in the wholesale market–a headwind that’s unlikely to abate over the next 12 months to 18 months. That being said, the firm’s existing contracts should ensure the sustainability of the recently reduced dividend.

Just Energy will announce results for its fiscal first quarter on or around Aug. 9, 2013, at which point we’ll have more insight into the company’s health and the potential for a turnaround. Investors shouldn’t build a new position in this stock, nor should they double down on an existing position; however, those who can stomach the volatility and have a longer time horizon should consider holding the stock.