Nicolas Maduro, Venezuela’s former vice president and current acting president, has campaigned as Hugo Chavez’s hand-picked successor and is all but certain to be elected president on April 14. Maduro’s victory would ensure that Chavismo, the socialist ideology that’s dominated Venezuelan politics since the late 1990s, will continue to hold sway.

That being said, economic realities may undermine Maduro’s efforts to maintain many of Chavez’s populist programs: Venezuela’s economy is in shambles and on the verge of outright collapse.

Since assuming office in 1999, Chavez has steadily increased government expenditures on social programs and subsidies to cultivate support among Venezuela’s poor, with public spending usually spiking in advance of presidential elections. 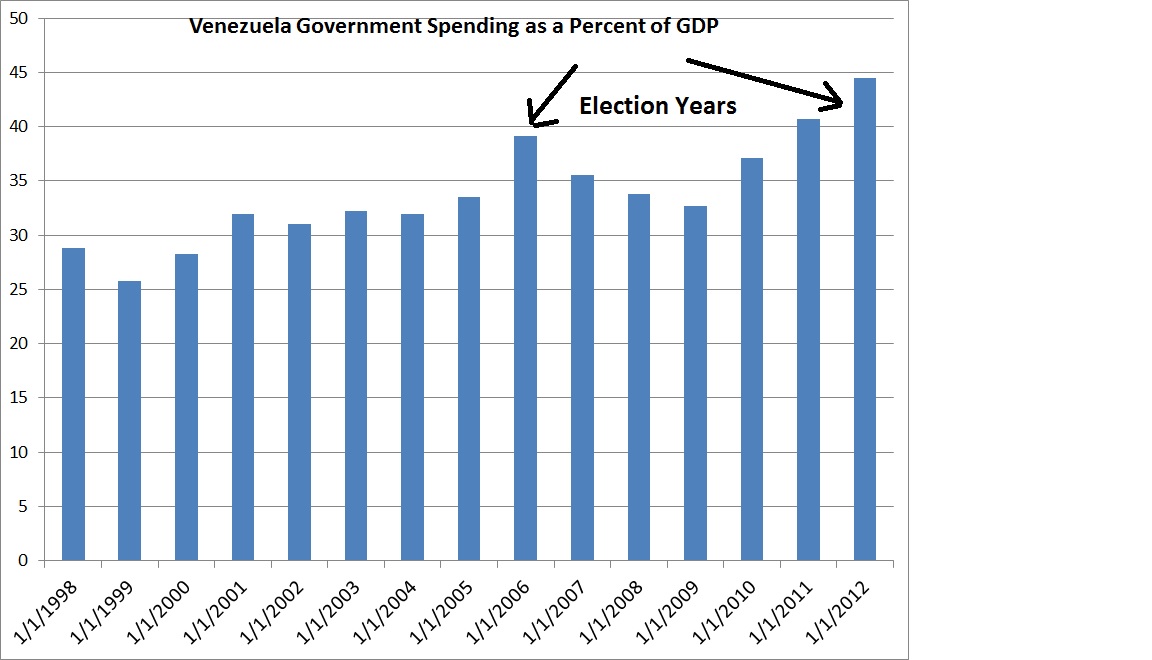 According to the BP’s (LSE: BP, NYSE: BP) most recent Statistical Review of World Energy, Venezuela’s oil reserves stood at 296.5 billion barrels at the end of 2011–the largest in the world, eclipsing Saudi Arabia’s 265 billion barrels.

But unlike Saudi Arabia, heavy oil accounts for much of Venezuela’s resource wealth. Exploiting these complex deposits requires significant investments in infrastructure and the technical expertise of major international oil companies and services firms. Industry observers estimate that maintaining production from Venezuela’s Orinoco Belt and other fields would require annual capital expenditures of between USD3 and USD5 billion.

But Chavez’s plethora of social programs robbed PDSVA of the necessary capital to fund ongoing development of the nation’s considerable hydrocarbon resources.

Under Chavez, the Venezuelan government has always had a vexed relationship with the energy industry.

When PDVSA workers went on strike in late 2002, the country endured a severe economic downturn and the unemployment rate skyrocketed to more than 20 percent. The state responded by firing 18,000 PDVSA workers, including many of its most talented and experienced engineers and employees.

In 2006 and 2007, Venezuela moved to nationalize exploration and production, seizing assets held by foreign companies such as ExxonMobil Corp (NYSE: XOM) and Italian energy giant Eni (Milan: ENI, NYSE: E). Although Chevron Corp (NYSE: CVX) and a handful of other oil and gas companies opted to renegotiate their agreements with PDSVA and continue to operate in Venezuela, the state’s increasingly heavy-handed moves have discouraged foreign investment in the domestic energy industry.

Against this backdrop, it’s no surprise that Venezuela’s oil production has declined steadily since Chavez became president in 1999. 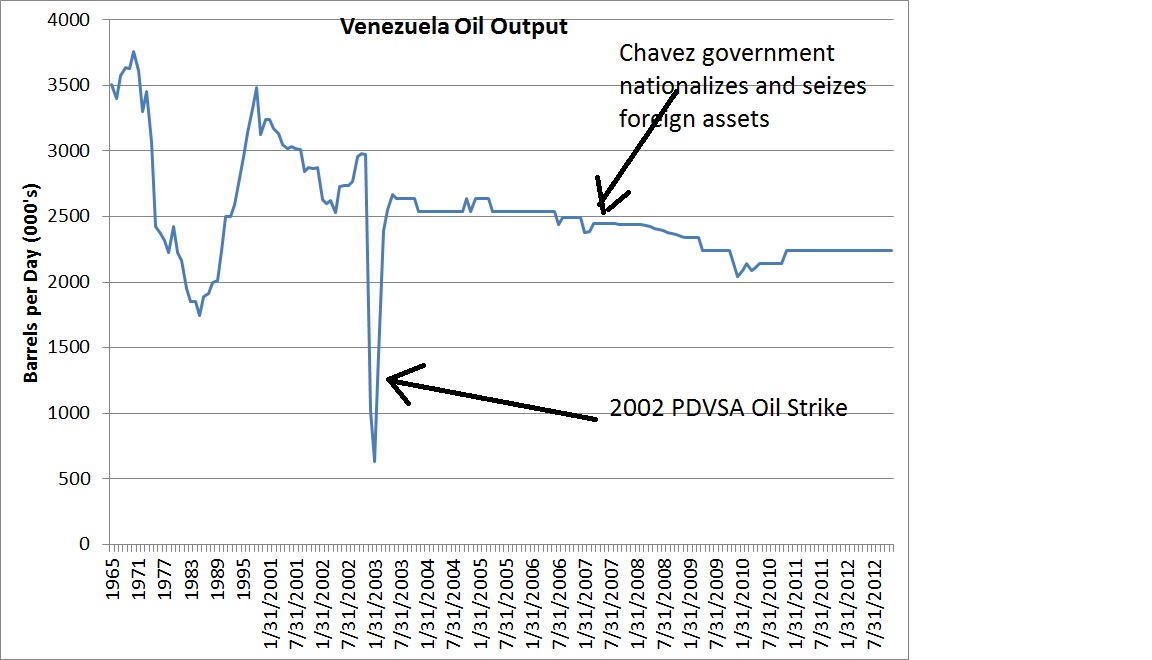 To worsen matters, the nation transfers a large portion of its hydrocarbon production to other nations as part of special arrangements that generate minimal cash proceeds. For example, Venezuela sends about 100,000 barrels of oil per day to Cuba in exchange for medical services for Venezuela’s poor. Cuba has even sold discounted heating oil to parts of the US in recent years as part of a public relations ploy–you may recall the television spots featuring Joseph Kennedy that advertised this program. Analysts from Morgan Stanley (NYSE: MS) estimate that an astounding 43 percent of Venezuela’s total oil exports aren’t sold at market-based prices.

Meanwhile, a fire at one of Venezuela’s largest refineries last year has increased the hydrocarbon-rich nation’s reliance on imported refined products. In fact, US gasoline exports to Venezuela have jumped from zero in 2008 to 94,000 barrels per day at the end of 2012.

Recent developments also suggest that PDSVA is strapped for cash. Although the government’s nationalization of its oil resources has deterred foreign investment, PDSVA has relied on international oil-field services firms to help the nation exploit its vast resource base. In a conference call to discuss Schlumberger’s (NYSE: SLB) fourth-quarter results, CEO Paal Kibsgaard noted that PDSVA had delayed payment on some of its bills:

In Venezuela, we have in recent years actively managed our activity levels relative to our receivables balance. During the fourth quarter we saw a significant slowdown in the rates of payment, and we are currently working closely with our customer to resolve the situation.

Massive government spending on social programs and yet another currency devaluation–the seventh since Chavez took office–have pushed the inflation rate in Venezuela to 22.8 percent. 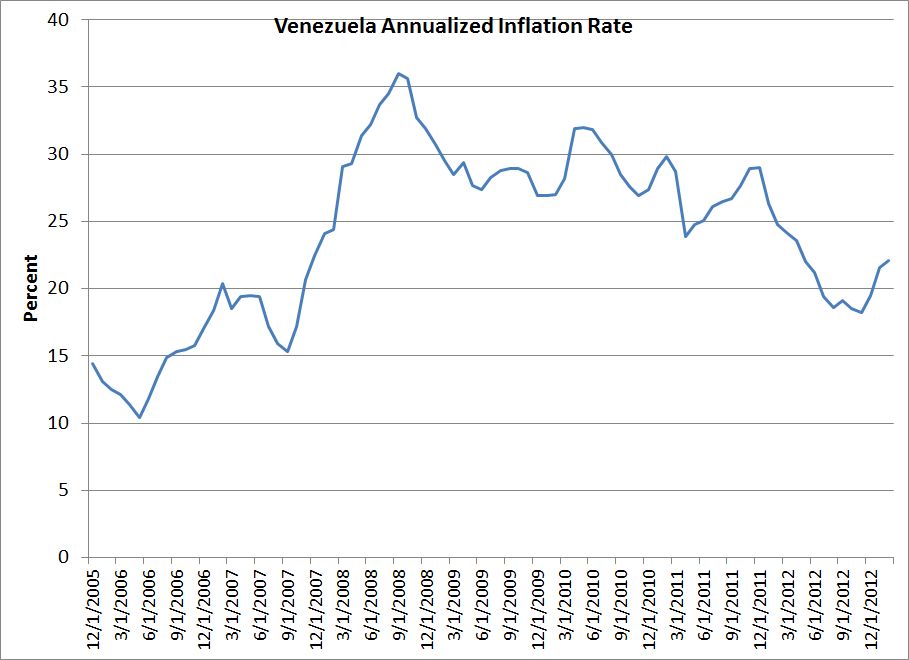 Meanwhile, mandated price controls on basic goods have resulted in widespread shortages of food and other household necessities. The government has attributed these problems to hoarding by the wealthy and large companies, backing up these claims by televising raids of well-stocked warehouses. These inflammatory actions are unlikely to encourage suppliers to keep the nation stocked with basic goods.

Ever since Hugo Chavez announced that doctors had discovered a baseball-sized tumor in his pelvic region, investors have been bullish on Venezuelan sovereign debt that’s denominated in US dollars. 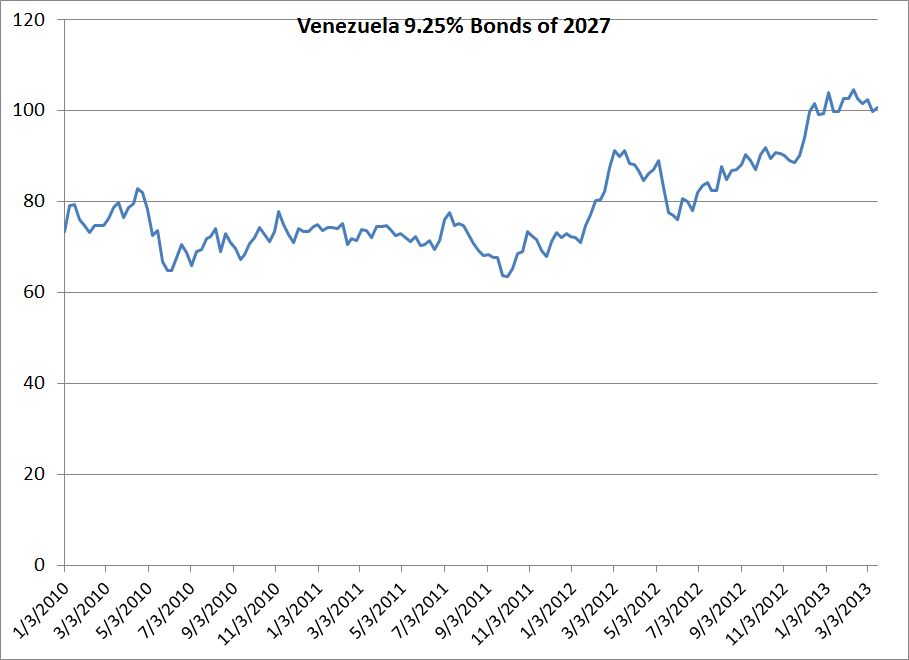 This rally reflects a belief that Chavez’s death would hasten a return to market-friendly policies that would encourage foreign investment in Venezuela’s floundering energy industry.

Over the long run, this investment thesis should pan out. Although Maduro will likely coast in the upcoming presidential election, the country can’t afford to continue Chavez’s magnanimous social programs because PDSVA flagging hydrocarbon output can no longer support these expenditures. However, the national oil company can’t restore production growth overnight; reversing years of neglect will require significant foreign investment in exploration and development.

The idea that an upsurge in Venezuelan hydrocarbon production in the aftermath of Chavez’s death will depress global oil prices in the near term betrays a lack of familiarity with the recent history of the country’s oil industry. A more likely outcome: Murado will continue Chavismo until the situation truly becomes untenable and the requisite foreign investment revitalizes Venezuela’s neglected oil fields.