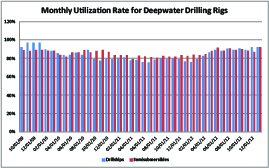 Editor’s Note: Elliott Gue shared his insights on a number of energy-related topics at the recent World MoneyShow in Orlando. In this interview, Elliott shares two of his top picks for 2013.

The industry has already invested massive sums to identify and exploit major deepwater oil fields. Over the past two years, contract drillers have ordered about 87 drillships and semisubmersible rigs capable of operating in water depths of at least 4,000 feet.

Not only does this trend reflect accelerating exploration and development in these frontier basins, but the contract drilling industry is also in the midst of a youth movement, with established players seeking to revitalize their fleets with high-specification rigs that command higher day-rates–a huge opportunity for equipment suppliers.

Despite these significant capacity additions, utilization rates for these rigs have remained elevated, as high oil prices and declining production from mature fields prompt upstream operators to ramp up offshore exploration and development. Meanwhile, the resurgence of permitting and drilling activity in the Gulf of Mexico–trends that we highlighted in a recent Graph of the Week–has further tightened the market for deepwater-rated rigs. 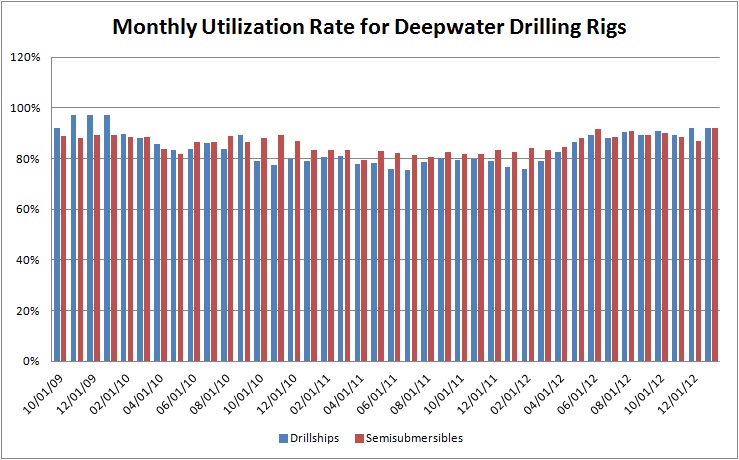 The supply demand-balance becomes even tighter in the ultra-deepwater segment, a category that includes rigs capable of drilling in water depths that exceed 8,000 feet. According to data from trade publication Riglogix, the utilization rate for ultra-deepwater rigs currently stands at 100 percent. Not only do the daily rates that these vessels earn continue to range between $550,000 and $650,000, but an upsurge in longer-term fixtures in the back half of 2012 also suggests that upstream operators expect the market to remain stretched.

In July 2012, SeaDrill (NYSE: SDRL) announced that BP (LSE: BP, NYSE: BP) had agreed to pay up to USD4 billion to engage three of the firm’s under-construction drilling rigs for an average of about six rig years. Following on the heels of this news, Royal Dutch Shell (LSE: RDSA, RDSB; NYSE: RDS A, RDS B) inked a 10-year commitment with Transocean (NYSE: RIG) for four new ultra-deepwater drilling rigs, the first of which will join in the fleet in 2015. The world’s largest offshore contract driller will receive up to USD7.6 billion for these four fixtures.