The US Onshore Rig Count by Company Type 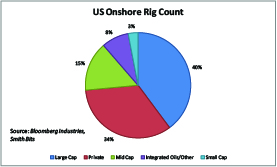 One of the first Graphs of the Week that we published broke down the US onshore rig count by geographic location, demonstrating the great migration of drilling units from basins that produce primarily natural gas to plays that also yield significant volumes of crude oil and natural gas liquids.

In this week’s featured graph, we view the US onshore rig count through the lens of company size, a project that reveals a great deal about the history of shale oil and gas development and future trends in this space.

The major integrated oil companies generally decreased the levels of capital allocated to exploration in 2000-05, choosing instead to focus on wringing additional efficiencies out of major mergers and acquisitions.

Meanwhile, enterprising independent operators focused drove much of the exploratory activity and development of US unconventional oil and gas plays. In subsequent years, most Super Oils tried to buy their way into these plays via joint ventures and outright acquisitions. Some operators likely overpaid for these assets–ExxonMobil Corp’s (NYSE: XOM) acquisition of gas producer XTO Energy springs to mind–while other operators such as Chevron Corp (NYSE: CVX) have taken a measured approach that focuses on value.

This history of exploration and development explains why large-cap independents and privately held companies account for almost three-quarters of the US onshore rig count, while integrated oil companies represent only 8 percent of the total. 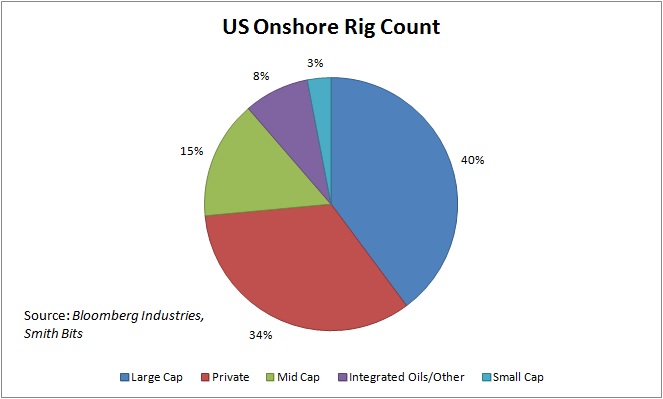 The predominance of independent producers–many of which operate either exclusively or primarily in US onshore plays–also helps to explain the steady increase in overall hydrocarbon production despite low natural-gas and NGL prices. Lacking the geographically diversified asset bases of a Super Oil, these companies necessarily rely on US output growth to generate the cash flow needed to offset the natural decline rate of their production bases.