The Canadian Invasion and Other Trends in MLP M&A

Why have these Canadian midstream players targeted US natural-gas assets, particularly those with expansion projects that will provide much-needed takeaway capacity to producers in the prolific Marcellus Shale and Utica Shale?

Appalachia has emerged as the low-cost producer of natural gas in the US. Over the past half-decade, dry-gas production from the Marcellus Shale has surged, while output from older gas-focused shale plays has tumbled. This trend looks set to continue.

Although US natural-gas prices will probably remain range-bound over the next several years, low-cost basins such as the Marcellus Shale and Utica Shale will continue to take market share from marginal areas of production such as the Fayetteville Shale and the Barnett Shale.

Meanwhile, midstream growth opportunities in Canada hinge primarily on oil-sands developments that were approved during the salad years and are slated to come onstream over the next 24 months or so. Thereafter, the pipeline of potential projects thins out.

Adding geographic diversification and exposure to a longer-term growth story with a makes a great deal of sense, especially with midstream operators in Canada enjoying a favorable cost of equity capital relative to their peers in the US.

In fact, one of the defining characteristics of the down-cycle in energy has been the resilience of the major Canadian midstream operators compared with their US counterparts—especially when you factor out currency effects. 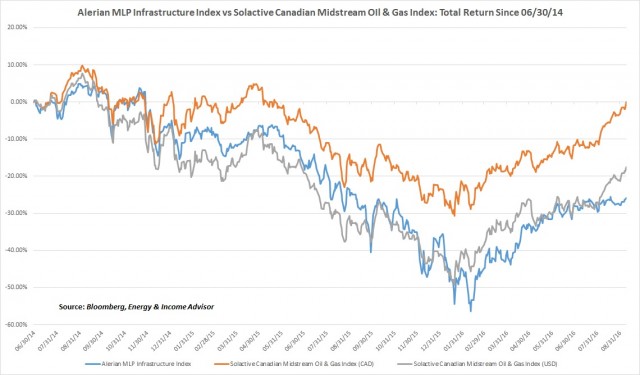 Not only has the Solactive Canadian Midstream Oil & Gas Index outperformed since oil prices began to tumble, but these companies have also been able to issue equity at less of a discount than midstream MLPs. 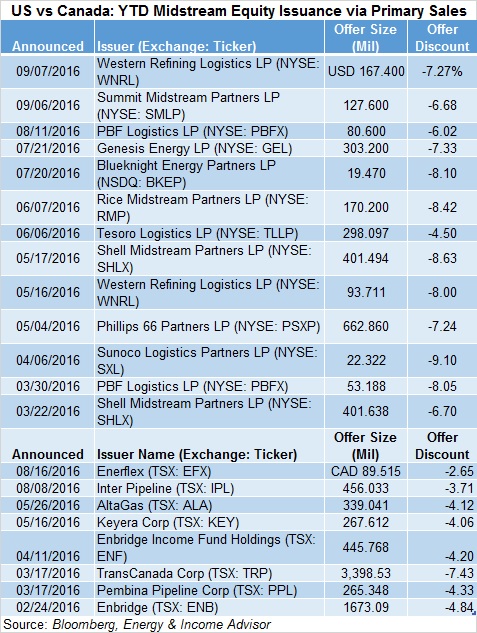 This relative strength reflects these companies’ cleaner balance sheets and the steady nature of oil-sands production compared with the steep decline rates exhibited by wells in shale oil and gas plays.

From a technical standpoint, the profusion of fund products that offered significant exposure to master limited partnerships (MLP) also contributed to the indiscriminate buying and selling of US midstream stocks. Shares of Canadian midstream operators didn’t experience anything nears this level of financialization.

But Enbridge’s blockbuster deal has ignited investors’ expectations for a wave of mergers and acquisitions in the US midstream patch, especially after Enbridge’s shares rallied in response to the announcement—a rarity in an all-stock transaction.

Nevertheless, much of the deal flow in the US midstream space will likely involve asset purchases instead of whole companies. As we pointed out in our recent review of merger and acquisition activity in the utility sector, asset acquisitions take less time to close and involve less regulatory scrutiny.

In many instances, these transactions will involve cash-strapped operators selling noncore assets to strategic buyers or pursuing joint ventures with utilities and other customers.

This approach should result in higher valuation multiples and reduce the seller’s near-term capital expenditures while giving their joint-venture partners a vested interest in growing system volumes.

Plains All-American Pipeline LP (NYSE: PAA), for example, has completed $480 million worth of divestments this year and has targeted a total of $600 million.

Recent deals include the sale of terminal capacity in the Northeast to PBF Logistics LP (NYSE: PBFX), a strategic buyer that expects to dramatically increase the cash flow that these assets generate by connecting them to PBF Energy’s (NYSE: PBF) refinery in Paulsboro, New Jersey.

The partnership also sold a 50 percent interest in the Cheyenne Pipeline, which serves a refinery owned by HollyFrontier Corp (NYSE: HFC), to Holly Energy Partners LP (NYSE: HEP) and contributed the Cashion terminal and a 55-mile oil pipeline to a joint venture with Phillips 66 (NYSE: PSX) that will serve producers in the Anadarko Basin.

And Southern Company (NYSE: SO) last week completed its purchase of a 50 percent stake in Kinder Morgan’s (NYSE: KMI) Southern Natural Gas system. This deal should boost the utility’s earnings immediately and increase the firm’s control over its incoming gas supply.

With major midstream players such as Williams Partners, Plains All-American Pipeline and Kinder Morgan focused on shoring up their balance sheets, this trend looks set to continue.

Meanwhile, Duke Energy Corp’s (NYSE: DUK) CEO recently highlighted the company’s interest in bulking up its exposure to interstate gas pipelines; a joint venture with Williams Partners would be a natural fit for both companies.

Nevertheless, Enbridge’s takeover offer for Spectra Energy has ignited expectations for a wave of consolidation in the US midstream industry.

Not only do many of these stocks trade at a fraction of where they stood a few years ago, but scale will also be critical in a challenging environment where competition for incremental volumes has intensified and the list of potential growth projects has narrowed.

Enbridge’s takeover offer for Spectra Energy could put the pressure on other midstream operators to make a move.

Energy Transfer Equity LP (NYSE: ETE) was certainly chastened after escaping from its agreement to purchase of Williams Companies (NYSE: WMB). However, during Energy Transfer Equity’s second-quarter earnings call, CEO Kelcy Warren indicated that the family of MLPs could be back in the mergers and acquisitions game over the next six to 12 months.

Meanwhile, OGE Energy (NYSE: OGE) has partnered with an unidentified third party to bid for CenterPoint Energy’s (NYSE: CNP) 55 percent interest in Enable Midstream Partners LP (NYSE: ENBL)—a development that could unlock additional upside in the ailing MLP, which would probably be better off as part of a larger organization.

Enterprise Products Partners LP (NYSE: EPD) stock had sold off when Reuters and the Financial Times broke the story of the blue-chip MLP’s interest in Williams Companies and has underperformed subsequent weeks.

Although Enterprise Products Partners recently issued a press release announcing that the firm had withdrawn its interest in Williams Companies, investors shouldn’t necessarily take this disclosure at face value.

The addition of Williams Partners’ industry-leading gathering franchise in the Marcellus Shale and an impressive backlog of takeaway projects serving this play would address a hole in Enterprise Products Partners’ portfolio and offer exposure to a long-term growth opportunity.

And the activist investors involved in Williams Companies likely salivate over what a high-quality management team could do with Williams Partners’ asset base.

Corvex Management succeeded in adding three members to Williams Companies’ board, including Scott Sheffield, CEO of Pioneer Natural Resources (NYSE: PXD)—an exploration and production company that has a close working relationship with Enterprise Products Partners in the Permian Basin and Eagle Ford Shale. This move could help to grease the rails.

Enterprise Products Partners’ press release about stepping away from its talks with Williams Companies gave the MLP’s stock price a boost. At the same time, the MLP’s announcement cited a “lack of engagement” from Williams Companies as the reason for this ostensible about-face, an assertion that should ratchet up the pressure on embattled CEO Alan Armstrong.

Acquiring Williams Companies could require Enterprise Products Partners to stretch its balance sheet and raise concerns about whether the MLP bit off more than it can chew.

However, we would expect Enterprise Products Partners to lighten the load by divesting some of Williams Partners’ noncore assets–for example, recent deal flow suggests that the partnership’s logistics assets in the Gulf of Mexico could fetch a decent price.

All signs point toward further consolidation in the midstream space, though asset sales and joint ventures likely will predominate in the near term. However, with the competition for incremental volumes intensifying and the slate of potential growth projects dwindling, the benefits of scale and exposure to the best basins become increasingly critical.

Although much of the headline takeover activity and scuttlebutt in the midstream space have involved companies seeking to add exposure to the Marcellus Shale’s growth story, the emergence of the Permian Basin as the low-cost oil resource in the US onshore market could prompt deal flow involving companies looking to boost their exposure to this area.

Pure midstream plays on the Permian Basin don’t exist, but Plains All-American Pipeline LP (NYSE: PAA) and Targa Resouces Corp (NYSE: TRGP) have a sizable midstream presence in the field and could be in play.

After successive waves of indiscriminate selling and buying, the easy money has been made in the MLP space; going forward, investors must have a firm grasp on underlying fundamentals to achieve differentiated returns.

Energy & Income Advisor  will give you the edge you need to outperform. Subscribe today for our updated analysis and ratings for every midstream MLP as well as access to our exclusive Live Chat with readers on Sept. 26.

These monthly online chats are your opportunity to ask us any questions you might have about oil and gas prices, energy stocks or anything else that might be on your mind.