The Appeal of Investing in MLPs

Editor’s Note: Elliott Gue will deliver several presentations at the World MoneyShow Orlando, a must-attend event that will take place from Jan. 30 to Feb. 2, 2013, at the Gaylord Palms resort and convention center. You won’t want to miss Elliott’s discussion of how investors can profit from America’s energy renaissance. Registration for the conference is free. You can sign up online or call 1-800-970-4355 and tell the customer service representative that Elliott referred you.

The master limited partnership’s (MLP) lineage dates back to 1981, when exploration and production outfit Apache Corp (NYSE: APC) consolidated 33 of its oil and gas operations into this structure.

In the mid-1980s, the universe of publicly traded partnerships differed dramatically from the options available to today’s investors. With no limitations on what assets and operating businesses could adopt the MLP structure, the universe of publicly traded partnerships expanded rapidly and included restaurants, nursing homes, shopping centers, forest products and amusement parks. Even professional sports franchises got in on the action, with Boston Celtics LP raising $48 million in an initial public offering shortly after the team won the 1985-86 NBA championship.

Alarmed by the upsurge in companies converting to MLPs or spinning off assets into this tax-advantaged structure, Congress passed the Tax Reform Act of 1986 and the Revenue Act of 1987, which sought to prevent a diminution of the corporate tax base. This legislation requires publicly traded partnerships to generate at least 90 percent of their gross income from “qualifying” sources, the majority of which relate to the production, processing and transportation of oil, gas and other natural resources.

Despite the dramatic changes that have occurred in the universe of publicly trade partnerships since the 1980s, the basic appeal of this security class to investors has remained the same: above-average yields and significant tax advantages. These qualities, coupled with the current market environment and investor psychology, explain the increasing popularity of publicly traded partnerships.

The Search for More Yield: MLPs and Investor Psychology

In a March 1987 article published in the Wall Street Journal, Barbara Donnelly wrote: “Investment bankers specializing in [master limited] partnerships say that in order to be competitive an issue must offer a current return of 9 percent to 10 percent.”

But finding securities that offer above-average yields and reliable quarterly payouts has become increasingly difficult. With the Federal Reserve holding the federal funds rate near zero percent, bank certificates of deposit and US Treasury bills offer plenty of safety but negligible current returns. Meanwhile, yield to maturities in the US corporate bond market ensure that issuers enjoy a relatively low cost of capital. Bond investors seeking a high current return, on the other hand, must focus on lower-quality credits. 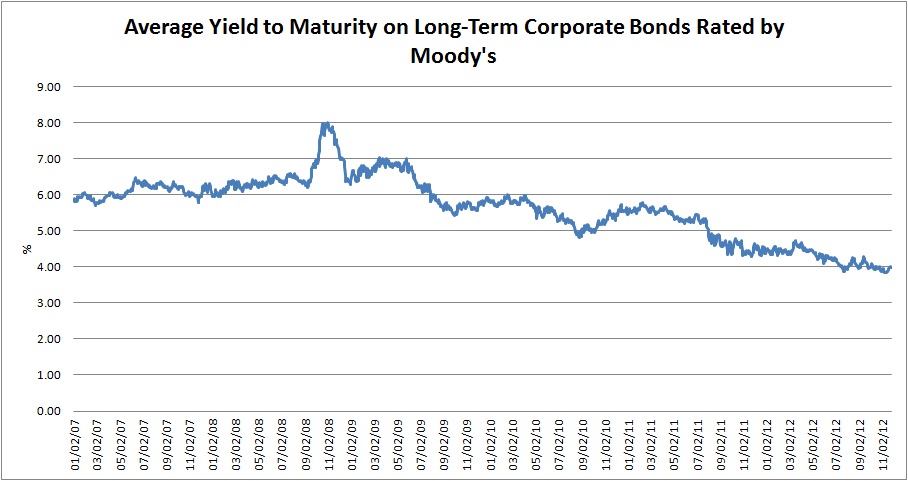 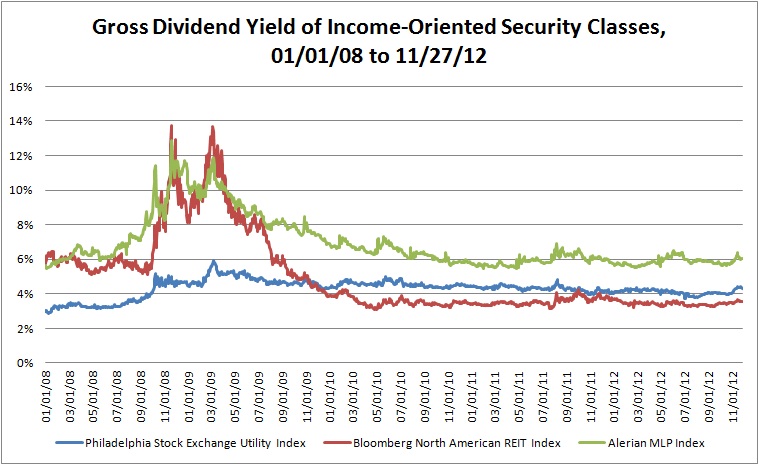 Meanwhile, many income-seeking investors remain scarred by the stock-market implosion that accompanied the global credit crunch and the Great Recession, a trying period that serves as a reminder of the risks involved in dividend investing. Few will forget the panic that ensued when the credit bubble finally burst, forcing corporate titans such as Bank of America Corp (NYSE: BAC) and General Electric (NYSE: GE) to slash their quarterly dividends.

In contrast, energy-focused MLPs emerged from this extreme stress test largely unscathed, with the majority managing to maintain their quarterly distributions despite frozen credit markets, the worst economic downturn in a generation, and collapsing oil and natural-gas prices.

More important, energy-focused MLPs have mitigated some of the pressure points that squeezed the group during the credit crunch and Great recession.

Some MLPs that gather and process natural gas suffered when commodity prices plummeted. Gathering systems comprise small-diameter pipelines that transport natural gas from individual wells to the pipeline network and processing plants. This business line can come under pressure when the price of natural gas declines to levels that prompt producers to rein in drilling activity, a move that reduces new well connections and throughput on the gathering system.

Processing plants separate natural gas liquids (NGL)–a heavier group of hydrocarbons that includes propane, ethane and butane–from the raw natural gas. The degree to which this business is exposed to fluctuations in commodity prices hinges on how the processor structures its contracts with producers. At the time, the industry favored agreements that compensated processors based on the value of NGLs produced.

Chastened by this experience, MLPs that own gathering and processing assets have sought to shift their contract mix in favor of fee-based agreements that guarantee a minimum level of cash flow and limit exposure to fluctuations in commodity prices.

In a PIPE deal, the MLP would sell equity directly to private buyers such as hedge funds at a discounted price. Although the lock-up periods associated with these transactions helped MLPs to avoid the knee-jerk selloffs that occur in secondary offerings, this source of funding dried up during the credit crunch and a wave of selling by liquidity-constrained institutional investors sent unit prices plummeting.

In the wake of the credit crunch, the majority of MLPs have shored up their balance sheets, replacing PIPE funding with credit facilities, bond offerings and secondary issues.

Not surprisingly, the financial-services industry has been quick to capitalize on investor demand for MLPs, offering more than 47 fund products that focus exclusively on this security class or allocate a significant portion of their investable assets to the group. Thirty-five of these funds have launched since 2010, a testament to investors’ demand for MLPs.

The marketing literature associated with these funds often touts the above-average yields offered by MLPs while extolling the reliable streams of cash flow generated by these toll-road businesses. This messaging has resonated with investors, while the fee revenue garnered from these fund products has been a bright spot for asset management firms.

Income-oriented investors continue to cast a wary eye toward ongoing efforts to avoid the so-called fiscal cliff, a series of tax hikes and spending cuts that will go into effect on Jan. 1, 2013, unless President Obama and Congressional leaders can reach a compromise. With the 15 percent tax rate on dividends slated to expire at year-end, investors worry that the Internal Revenue Service (IRS) will take a bigger cut of income earned from these investments.

However, MLPs would likely benefit from any increase in the tax on dividends.

Publicly traded partnerships don’t pay federal income taxes at the corporate level. As pass-through entities, MLPs distribute the majority of their income to public untholders, who, in turn, pay taxes on their share of this disbursement at their individual rate. This structure effectively avoids the double taxation of corporate dividends, which are taxed at the entity and shareholder level.

And unlike a regular dividend, the IRS considers these distributions a return of capital that reduces your cost basis in the MLP but isn’t taxed until you sell your position. At the end of the tax year, the MLPs in which you’ve invested will send you a Form 1065, Schedule K-1 that details your share of the partnerships’ profits, losses, deductions and tax credits to help determine your tax obligation.

On average, the unitholders’ share of the MLP’s taxable income comes to about 20 percent of the total distribution paid over the course of the year; this amount is taxed at the individual’s ordinary income tax rate. In other words, the taxes on about 80 percent of the distributions you receive will be deferred until you sell your position in the MLP, shielding some of your income against any increase in the dividend tax rate. (My colleague Elliott Gue discussed the finer points of MLP taxation in High Yields and Low Taxes.)

Of course, the elevated yields and tax advantages offered by MLPs won’t necessarily translate into a solid return on investment if the underlying business can’t support the current payout or drive distribution growth.

As Elliott explained in Investing in MLPs: Yield vs. Distribution Growth, names with rising distributions–as opposed to those that only offer a high yield–have outperformed in recent years, a trend that we expect to continue.

Fortunately, the future appears bright for MLPs which own infrastructure that transports or processes oil, NGLs and natural gas. The rapid development of the nation’s prolific shale fields has enabled the US to grow domestic oil output for the first time in decades and overtake Russia as the leading producer of natural gas.

This upsurge in oil and gas output has occurred in many regions that lack midstream capacity, while frenzied drilling in the Permian Basin and other areas with a long history of hydrocarbon production has overwhelmed existing infrastructure. Needless to say, the pipeline of midstream projects remains robust and should continue to fuel distribution growth for the best-positioned operators.

At the same time, upstream operators such as Linn Energy LLC (NSDQ: LINE) continue to reap the rewards of the industry’s great migration from basins that primarily produce natural gas to liquids-rich fields. Producers’ eagerness to monetize gas-producing fields has enabled MLPs to acquire these assets at favorable valuations that ensure a reasonable rate of return on hedged production. More important, the acquirer gains exposure to future upside (via stepped-up drilling) if the price of natural gas improves.

We expect the brisk pace of deal-making to continue into 2013, thanks to supportive capital markets.

As pass-through entities that distribute the majority of their cash flow to unitholders, master limited partnerships (MLP) generate growth by raising capital in the debt and equity markets to fund acquisitions and expansion projects.

Ready access to capital over the past several years has fueled an upsurge in mergers and acquisitions activity among MLPs. Through Nov. 28, 2012, the 87 energy-related publicly traded partnerships had announced $35.68 billion in acquisitions. With two months remaining in the year, the group is within striking distance of surpassing the $37.31 billion worth of transactions announced in 2011. That being said, we don’t expect MLPs to eclipse the record $48.29 billion in deals that took place in 2010.

This year, MLPs have spent $12.9 billion on acquiring pipeline assets, $7.45 billion on oil refining and marketing assets and $6.62 billion on assets related to exploration and production.

With an ample pipeline of growth opportunities via expansion projects and acquisitions, we expect Alerian MLP Index to continue its impressive track record of distribution growth.