Editor’s Note: Elliott Gue will deliver several presentations at the World MoneyShow Orlando, a must-attend event that will take place from Jan. 30 to Feb. 2, 2013, at the Gaylord Palms resort and convention center. You won’t want to miss Elliott’s discussion of how investors can profit from America’s energy renaissance. Registration for the conference is free. You can sign up online or call 1-800-970-4355 and tell the customer service representative that Elliott referred you.

Amid the recent influx of MLPs that own nontraditional assets or pay a variable distribution, Summit Midstream Partners LP, which went public on Sept. 27, 2012, is a bit of a throwback: a midstream operator that owns gathering and processing assets and pays a regular quarterly distribution.

The fledgling publicly traded partnership traces its lineage back to fall 2009, when members of the management team and private-equity outfit Energy Capital Partners formed Summit Midstream Partners LLC to build a portfolio of midstream energy assets in North America. In the third quarter of 2011, this group sold a 9 percent interest in the concern to GE Energy Financial Services.

In subsequent years, Summit Midstream Partners LLC expanded the gathering network to its current capacity of 410 million cubic feet of natural gas per day. Management expects nameplate throughput to expand to 450 million cubic feet per day when additional compressors and looping pipelines come onstream in the first quarter of 2013.

This operation has little direct exposure to fluctuations in commodity prices, thanks to long-term gathering agreements that also include remaining minimum volume commitments with an average of 138 million cubic feet per day remaining. An acreage dedication of about 100,000 acres with anchor customer Chesapeake Energy guarantees that any wells the operators sinks in the area of mutual interest will be connected to Summit Midstream Partners LP’s DFW gathering system.

Volumes transported on these pipelines increased 16.9 percent from the first half of 2012 to 380 million cubic feet per day. Earlier in 2012, Chesapeake Energy and other operators had restricted production from existing wells in response to the ultra-depressed natural-gas prices that followed the no-show winter of 2011-12. Much of this upside stemmed from some operators removing curtailments on their existing wells to take advantage of the recovery in the price of natural gas. Atlas Resource Partners LP (NYSE: ARP), for example, stepped up work-over operations on acreage acquired from Carrizo Oil & Gas (NSDQ: CRZO) earlier this year.

Nevertheless, Summit Midstream Partners LP estimates that roughly 25 percent of the 312 wells connected to the DFW system were either shut-in or significantly curtailed at the end of the third quarter. A further recovery in the price of natural gas would likely prompt operators to ramp up output from these wells. Management has also highlighted plans to connect four pad sites operated by the privately held Beacon Exploration & Production in the coming year, a move that should bolster throughput and help to offset natural well declines.

However, drilling activity will likely remain constrained. Summit Midstream Partners LP’s gathering pipelines are concentrated in the southeast portion of Tarrant County–the heart of the gas-producing Barnett Shale. The newly listed MLP’s investor relations team has touted this area as the “core of the core of the Barnett,” noting that the DFW system services two of the play’s most prolific wells, based on their peak production rates.

But upstream operators have scaled back drilling activity in the portions of the Barnett Shale that primarily produce natural gas, preferring the superior economics offered by liquids-rich basins such as the Bakken Shale, the Eagle Ford Shale and the Permian Basin. Accordingly, the active rig count in Tarrant County has tumbled from 24 at the beginning of the year to about eight in the second week of December. 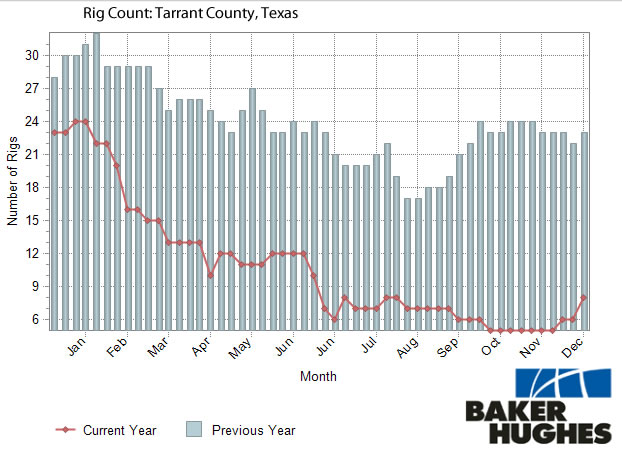 In a conference call to discuss third-quarter results, Summit Midstream Partners LP’s CEO, Steven Newby, told analysts that the firm expects operators to run one rig in the MLP’s service area in the coming year and emphasized that any upside would come from producers restoring output from so-called “wafflers”–existing wells that have been curtailed or shut in. Over the 12 months ended Sept. 30, 2012, management expects the DFW Midstream system to account for 54 percent of the MLP’s revenue.

In connection with this deal, the MLP inked long-term gathering agreements with anchor customer EnCana on each of these three systems and assumed six contracts with five other producers.

The majority of the volumes transported on this gathering network come from the Mesaverde, a shallow formation that yields natural gas and significant quantities of NGLs. In the third quarter of 2012, the Grand River system averaged throughput of 578 million cubic feet per day, down 1.7 percent from the first half of 2012.

Much of this drop in production stemmed from temporary issues that affected about 20 million cubic feet per day of production in the Mamm Creek area. Throughput on the Orchard system will also continue its gradual decline unless EnCana and other producers step up drilling in the dry-gas portions of the Mancos and Niobrara Shale–an unlikely prospect in the current pricing environment. Management highlighted a recent joint venture between EnCana and steelmaker Nucor Corp (NYSE: NUE) as a potential growth driver for volumes in the Piceance Basin.

With an asset base that’s focused on two out-of-favor basins, Summit Midstream Partners LP lacks significant opportunities for organic growth. That being said, we don’t expect the MLP to have any challenges delivering its minimum quarterly distribution of $0.40 per unit; excluding one-time charges, the firm would have covered this payout by about 1.1 times.

The terms of the partnership agreement should provide a degree of protection to unitholders in the MLP’s first few years of operations. Summit Midstream Partners LLC own a 2 percent general partner interest in the MLP, as well as common units representing a 19.1 percent stake in the limited partner (LP) and subordinated units that amount to a 50 percent interest in the LP. These subordinated units are only entitled to a distribution after each common unit has received the minimum quarterly payout and any arrearages from prior quarters.

The subordinated units will convert to common stock once the MLP disburses at least the minimum quarterly distribution to each LP unitholder and makes the required payment to its general partner for twelve consecutive three-month periods. Alternatively, this conversion can occur if the MLP pays out 150 percent of its minimum annual distribution (equivalent to $2.40 per unit) over a period of four consecutive quarters.

Not only does this structure increase the likelihood that Summit Midstream Partners LP will be able to meet its minimum distribution to unitholders at this early stage in its life span, but the arrangement also incentivizes the sponsors to grow the MLP’s distributable cash flow.

In addition to the fee-based gathering agreements that the parent assumed as part of the acquisition, the firm inked two long-term deals to provide midstream services to WPX Energy (NYSE: WPX) and Black Hills Corp’s (NYSE: BKH) exploration and production subsidiary.

As part of these deals, the parent company will build additional gathering capacity to connect WPX Energy’s new production in the Rifle, Colo., area and construct a processing plant and related infrastructure to support Black Hills’ planned development of the liquids-rich Niobrara and Mancos formations.

Asked about potential drop-down transactions involving these newly acquired assets, Summit Midstream Partners LP’s CEO indicated that any deal wouldn’t take place until the parent completed certain capacity expansions and midstream projects–a hitch that would push any deal back to the end of 2013.

Although we’re less than enamored with Summit Midstream Partners LP’s current asset base, eventual drop-down transactions from the MLP’s sponsors should drive distribution growth. The outfit also has about $350 million in liquidity on its credit facility that could be plowed into an acquisition.

With an indicated yield of about 8 percent, units of Summit Midstream Partners LP offer a sufficient current return to compensate for an existing asset base that offers scant opportunity for growth. That being said, Energy Capital Partners has indicated that Summit Midstream Partners LP will be its primary platform for growth in the midstream space. Prospective investors should understand that an investment this fledgling MLP represents a bet that management will pursue an attractive slate of growth projects.