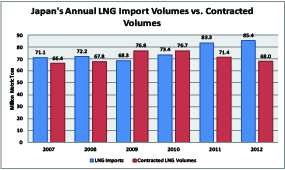 When natural gas is cooled to minus 260 degrees Fahrenheit at a liquefaction facility, the fuel condenses to roughly 1/600th of its original volume, facilitating overseas transport in specially designed ships. Regasification terminals heat the liquefied natural gas to restore the delivered volumes to a gaseous state before pipelines transmit the product to end users.

This network of LNG carriers (“floating pipelines” in industry parlance) and import and export terminals effectively releases natural gas from the geographical constraints of the pipeline network, enabling producers to deliver their output to overseas end markets.

Although Compagnie Algérienne du Methane Liquefié completed the world’s first commercial-scale liquefaction facility and shipped its first cargo to the UK in 1964, the build-out of LNG import and export capacity has accelerated over the past decade, with global shipments increasing at an average annual rate of 12 percent.

LNG in 2011 accounted for about 32 percent of the global trade in the commodity, compared to 26 percent in 2005. At the same time, LNG represents only 10.2 percent of global gas consumption, making it somewhat of a niche market.

Japan and South Korea have traditionally accounted for the bulk of global LNG demand. Not only does a paucity of domestic energy resources force Japan and South Korea to rely on imports, but formidable geographic obstacles–the Pacific Ocean and North Korea, respectively–also prevent the nations from accessing the continental pipeline system. Japan in 2011 accounted for 32.3 percent of global LNG imports. 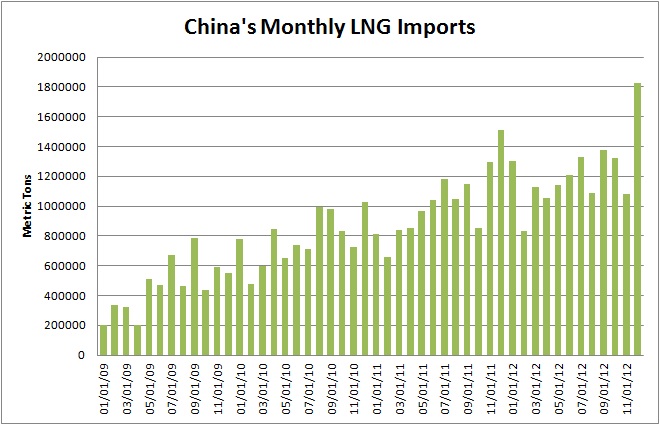 However, investors shouldn’t overlook the demand shock that has occurred in Japan over the past few years, a development that has tightened to global LNG market considerably.

In spring 2011, the magnitude-9.0 earthquake and resultant tsunami that devastated Japan’s Tohuku region and crippled the Fukushima Daiichi nuclear power plant prompted authorities to temporarily shutter the bulk of the nation’s nuclear reactors. At present, only two of the Japan’s nuclear reactors have resumed operation, forcing electric utilities to rely heavily on thermal power. 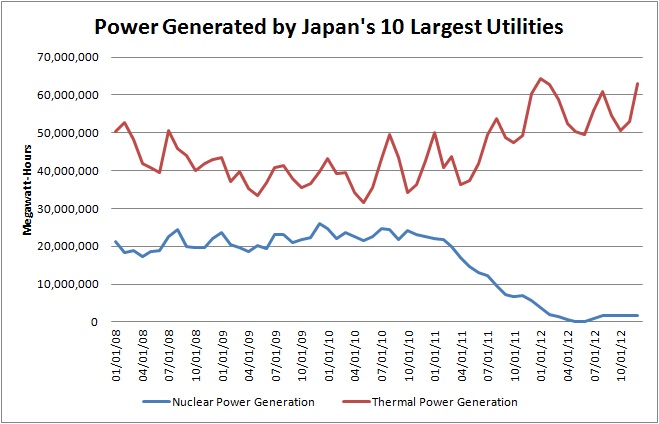 With Japan’s LNG imports surging 13.5 percent in 2011 and a further 2.4 percent in 2012, the so-called Fukushima effect has intensified competition for volumes in the spot market and elevated prices to levels that incentivize producers and traders to redirect volumes from Europe to Asia.

If we compare Japan’s LNG imports to the volumes covered by existing contracts in a given year, we can approximate the extent of the nation’s activity in the spot market for natural gas. (This rough calculation assumes that Japanese importers received all their agreed upon LNG shipments and doesn’t account for any potential supply disruptions or shortfalls). 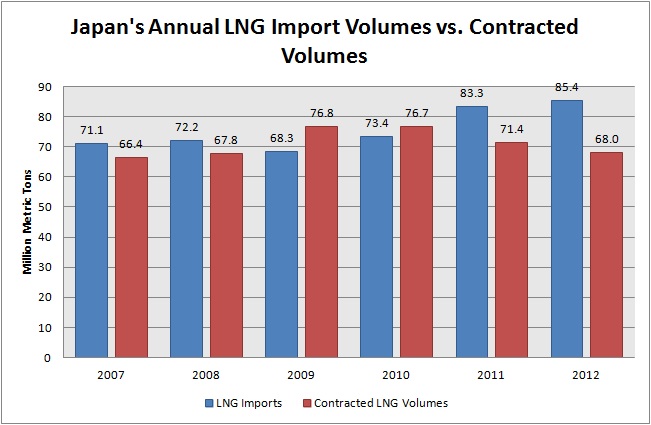 Japan’s LNG imports fell short of contracted volumes in 2009 and 2010, reflecting reduced demand during the global economic downturn. However, the gap between the nation’s contracted LNG volumes and total imports widened to 17.39 million metric tons in 2012–almost 3 times 2008 levels and 11.3 percent of the Asia-Pacific market. 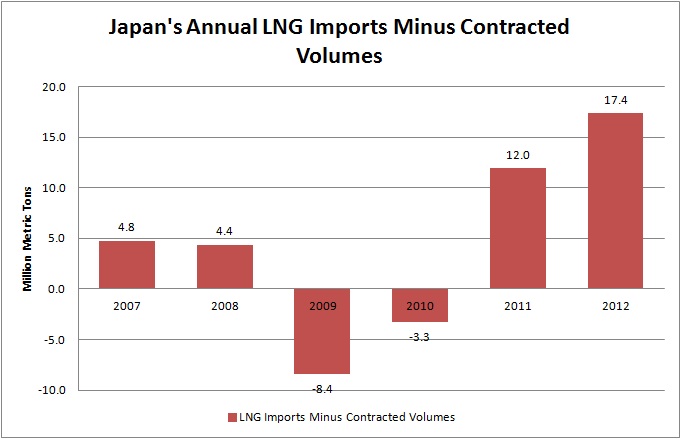 Now that we’ve quantified the so-called Fukushima effect, one question looms over the LNG market: When will Japan’s shuttered nuclear reactors come onstream, and how many will be in operation?

Only nuclear power plants deemed safe after a rigorous inspection by the newly formed Nuclear Regulatory Authority (NRA) will be allowed to restart, with the watchdog expected to promulgate its new safety standards in July 2013.

On the heels of its electoral victory in December 2012, Japan’s Liberal Democratic party and new Prime Minister Shenzo Abe have signaled that the country will build additional nuclear power plants–a reversal of the previous administration’s ban on the construction of new reactors and the expansion of existing facilities.

Although the timing and magnitude of Japan’s reactor restarts remains uncertain, these decisions and long-term policies regarding the country’s energy mix will hold significant ramifications for international LNG prices in the next few years and global export capacity in the long term.

We don’t expect all of Japan’s pre-Fukushima nuclear capacity to resume operations right away, which leaves some room for growth in LNG and coal demand–higher-priced imports of crude oil and heavy oil would likely be the first casualties. However, some industry observers conveniently take the prevailing abnormal supply-demand picture for granted in their assessment of international LNG markets. We will continue to monitor the situation.