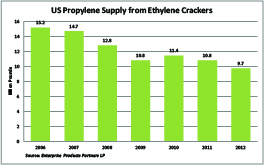 Many recent Graphs of the Week have focused on the challenges and opportunities presented by various market dislocations that have occurred because of rising hydrocarbon production from US shale oil and gas plays.

For example, the Dec. 15 and Dec. 23 installments of this feature tackled the ramifications of surging production of natural gas liquids (NGL), a group of heavier hydrocarbons that includes ethane, propane and butane.

Although these higher-value liquids have bolstered producers’ margins and incentivized drilling in the Eagle Ford Shale and other “wet” gas plays, the recent decline in NGL prices–primarily ethane and propane–will weigh on upstream operators and owners of processing assets whose contract mix skews toward keep-whole and percent-of-proceeds arrangements.

However, the recent weakness in ethane prices has been a boon for the domestic petrochemical industry, which uses the hydrocarbon as feedstock to produce ethylene and propylene–the building blocks for most synthetic materials. Lower ethane costs have fattened profit margins within the industry, while the increasing cost competitiveness of US chemical manufacturing provides a buffer against periods of weaker end-market consumption; higher-cost productive capacity in Asia and Europe will likely be idled to balance supply and demand.

But the US petrochemical industry’s rush to take advantage of the compelling economics associated with cracking ethane has inadvertently reduced the domestic supply of propylene, as this feedstock yields negligible amounts of the olefin relative to naphtha and other inputs. Over the past five years, annual US propylene output from ethylene crackers has declined by about 36 percent. 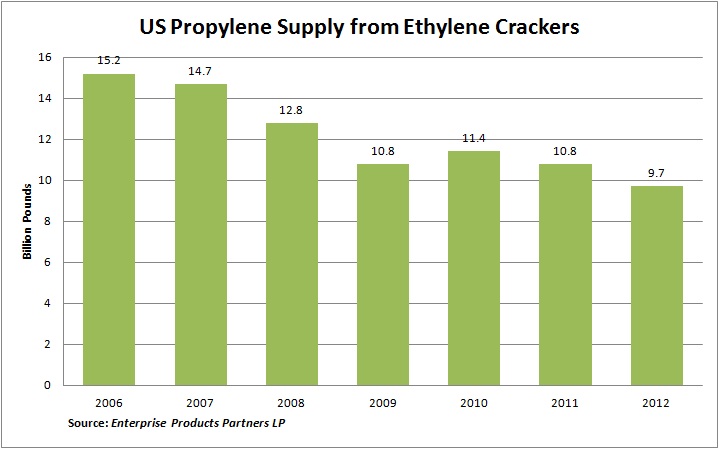 Although steam crackers supply only 40 percent of the propylene produced in the US, a weak outlook for domestic gasoline demand suggests that output from refineries is unlikely to make up the difference.

In response to this supply shortage, a number of operators have announced plans to construct propane dehydrogenization (PDH) facilities that transform the NGL into propylene.

Enterprise Products Partners LP (NYSE: EPD) recently contracted 100 percent of available capacity on a PDH facility that’s slated to come ontream in 2015 and produce up to 750,000 metric tons of propylene per year. These reservation agreements include fixed fees and boast a weighted average duration of 15 years. Management indicated that robust demand had prompted the firm to entertain discussions that could lead to the approval of a second plant.

North of the border, Williams Companies (NYSE: WMB) has proposed the construction of a PDH facility at its Redwater facility on Canada’s West Coast. Management estimated the project’s cost at between USD600 and USD800 million but has yet to announce the unit’s planned capacity.

For each of these companies, the PDH facility would provide a natural hedge against business lines that suffer when propane prices weaken. In contrast, PetroLogistics LP (NYSE: PDH), an MLP whose asset base consists solely of a propane dehydrogenation plant near the Houston Ship Channel, has greater exposure to fluctuations in propylene margins.

Whereas Williams Companies and Enterprise Products Partners’ diversified asset bases and steady cash flows make their stocks ideal long-term holdings for income-seeking investors, we regard PetroLogistics as a trading vehicle to take advantage of short-term improvements in propylene margins. The coming months could furnish such an opportunity if the winter withdrawal period fails to alleviate the glut of propane stocks.