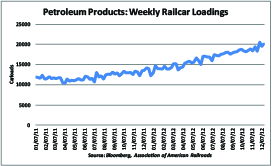 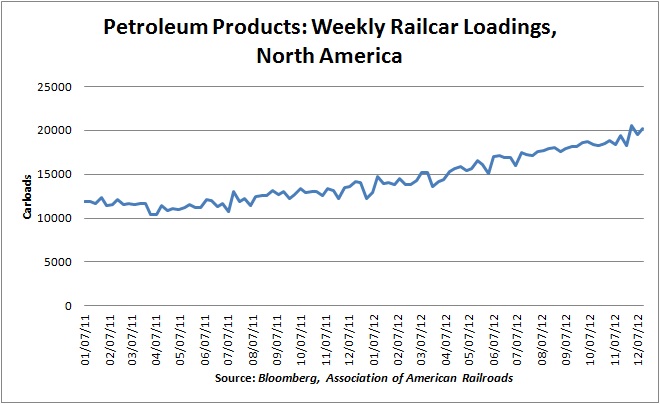 Over the past two years, the volumes of petroleum product transported by rail in North America has grown significantly, reflecting a concentrated effort among producers to overcome local takeaway constraints and achieve higher price realizations for their output.

With upstream operators ramping up activity in prolific shale plays, domestic oil production in 2009 grew 7 percent from year-ago levels–first increase in decades. Meanwhile, US oil output ticked up 2.3 percent in 2010 and 3 percent in 2011. These production gains are particularly impressive when you consider that offshore oil output had declined in the wake of the moratorium on deepwater drilling in the wake of the 2010 Gulf of Mexico oil spill. This year, the US oil production has increased by about 14 percent through the end of October.

Much of this upsurge in oil output has occurred outside traditional production centers, forcing companies that own and operate pipelines and other midstream infrastructure to play catch up. Meanwhile, production in the Permian Basin–a mature oil play in west Texas that’s been revivified by horizontal drilling and hydraulic fracturing—has overwhelmed existing takeaway capacity. Rising output from Canada’s oil sands and other unconventional plays is also flooding the US market.

Accordingly, domestic midstream infrastructure is in the midst of a major restructuring, with local takeaway constraints leading to severe volatility in the price of West Texas Intermediate (WTI) crude oil and other inland benchmarks. (See Mind the Differentials.) WTI has traded at a significant discount to Brent crude oil in recent years because of insufficient takeaway capacity at the delivery point in Cushing, Okla. As of midsummer, the capacity of inbound oil pipelines to Cushing totaled about 5.3 million barrels per day, while outbound capacity measured only 200,000 barrels per day–a huge imbalance.

These trends highlight the opportunity set for master limited partnerships that develop and operate midstream assets and refinery operators that stand to benefit from widening basis differentials, a topic that we discussed at length in Refiners: Profiting from America’s Oil Boom. At the same time, well-positioned railroad operators should continue to benefit from these pipeline constraints and the flexibility of shipping crude oil via rail.