Nestled in Pico Canyon in the rugged Santa Susana Mountains north of Los Angeles, Mentryville is a ghost town–the last resident left in 1994, shortly after the Northridge earthquake damaged one of the last remaining habitable structures.

Most motorists traveling by Santa Clarita on Interstate 5 would have no idea that they’re passing within a few miles of one of the state’s most important historical sites.

Over a century ago, Pico Canyon was even more remote and inaccessible; there were no paved roads, no railroads, and few natural sources of freshwater. The area was also home to a wide range of wildlife, including the rattlesnakes and wasps that plagued early pioneers.

For centuries, Native Americans had used crude oil collected from natural seeps in Pico Canyon for waterproofing and as a skin salve. Just as oil bubbling to the surface of a creek led to the drilling of America’s first commercial oil well in Pennsylvania in 1859, seeps in this remote part of southern California attracted the attention of Demetrius Scofield and Frederick Taylor of the California Star Oil Works.

Despite the region’s remoteness, California Star’s Alex Mentry in 1875 headed up an ambitious drilling program in Pico Canyon. The company’s first three wells showed promise but produced non-commercial volumes of oil. But in September 1876, Mentry drilled California’s first oil gusher. After deepening the well, oil spewed to the top of his 65-foot tall oil derrick. 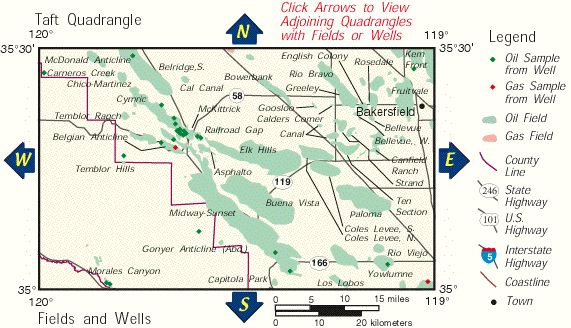 Pico Canyon marks the beginning of California’s rich history of oil production. Most of the state’s major oil discoveries occurred in Kern County, near Bakersfield, with the golden age of exploration taking place between 1890 and 1910. 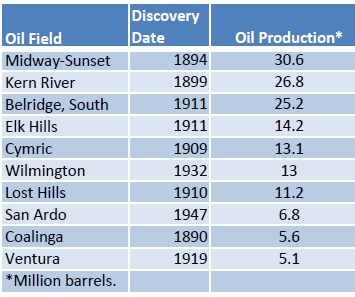 Drilled in an era when wooden derricks represented the vanguard of technology, California’s largest conventional fields are well past their peak production; the state’s oil output has declined to about 530,000 barrels per day (bbl/day) from roughly 1.1 million bbl/day in the mid-1980s.

But even after three decades of waning production, California still trails only Texas, North Dakota and Alaska in terms of annual oil output.

California needs every drop of that oil and then some. The most populous state in the union–home to the most cars, the nation’s longest commutes and notorious traffic jams–California consumes more than 1.6 million barrels of oil per day, more than three times in-state production. The state lags only Texas in terms of total oil consumption.

And that brings us to the state’s biggest headache: inadequate pipeline and refining capacity to meet demand. Shockingly, California has no pipelines that connect to the Gulf Coast or other major US refining and oil-production centers; all the state’s oil and refined-product imports arrive via tanker ships at its coastal ports. 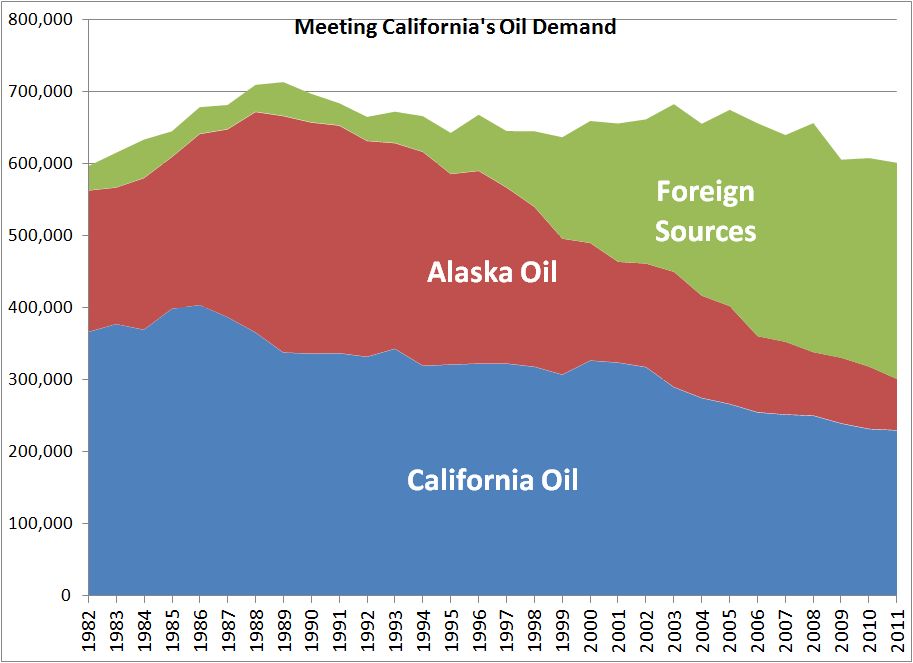 Mirroring national trends, California’s oil demand has declined over the past few years because of high prices and slow economic growth. The latter is a particularly daunting problem in the Golden State, where unemployment stands at 9.8 percent–two percentage points above the national average.

However, the state’s biggest challenge is on the supply side. In-state oil production and seaborne volumes from Alaska are declining at a much faster rate than consumption, increasing California’s dependence on foreign oil. In 2000 overseas imports accounted for roughly one-quarter of California’s oil supply; today the state imports about half the crude oil it consumes, with Saudi Arabia accounting for 30 percent of these volumes. 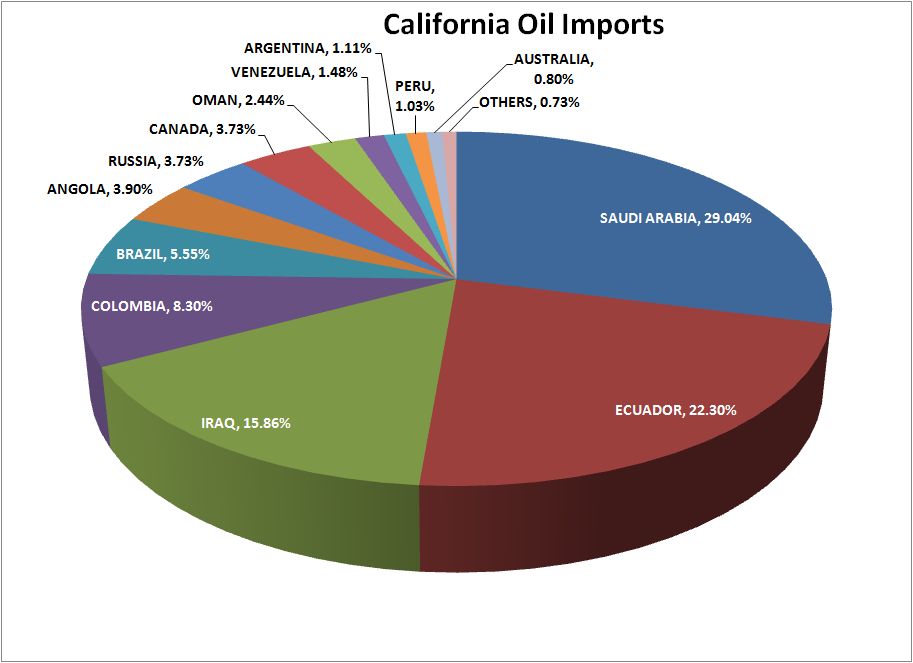 In the Dec. 13, 2012, issue of Energy Investing Weekly, Mind the Differentials, we explained how similar grades of crude oil can fetch vastly different prices depending on local supply and demand conditions.

Over the past few years, US oil production has increased measurably, led by surging output in unconventional plays. Frenzied drilling activity in North Dakota’s Bakken Shale has enabled the state to overtake Alaska as the second-leading producer of crude oil. Meanwhile, operators have applied hydraulic fracturing and horizontal drilling–the innovations that fueled the shale oil and gas revolution–to extract additional volumes from the Permian Basin, a mature field in west Texas.

This upsurge in onshore hydrocarbon production has overwhelmed regional pipeline and processing capacity. For example, a glut of crude oil in Cushing, Okla.–the delivery point for West Texas Intermediate (WTI)–has overwhelmed outgoing pipelines and depressed the price of this benchmark. Insufficient pipeline capacity explains why WTI fetches $92 per barrel at Cushing, while Louisiana Light Sweet crude oil trades at almost $113 per barrel.

In general, US and foreign waterborne crudes tend to track the price of Brent crude oil, a key international oil benchmark. However, landlocked varietals such as WTI, West Texas Sour and Western Canada Select trade at discounted prices.

California is especially disadvantaged by these pricing trends. Expensive waterborne crude oil imported from Iraq and Saudi Arabia now accounts for about half the state’s supply. And a lack of incoming pipeline infrastructure means that refineries in California have limited access to discounted US and Canadian crude oils.

Because crude oil produced in California competes with waterborne crude from Alaska or overseas, in-state volumes tend to command a significant price premium to WTI and other inland benchmarks. 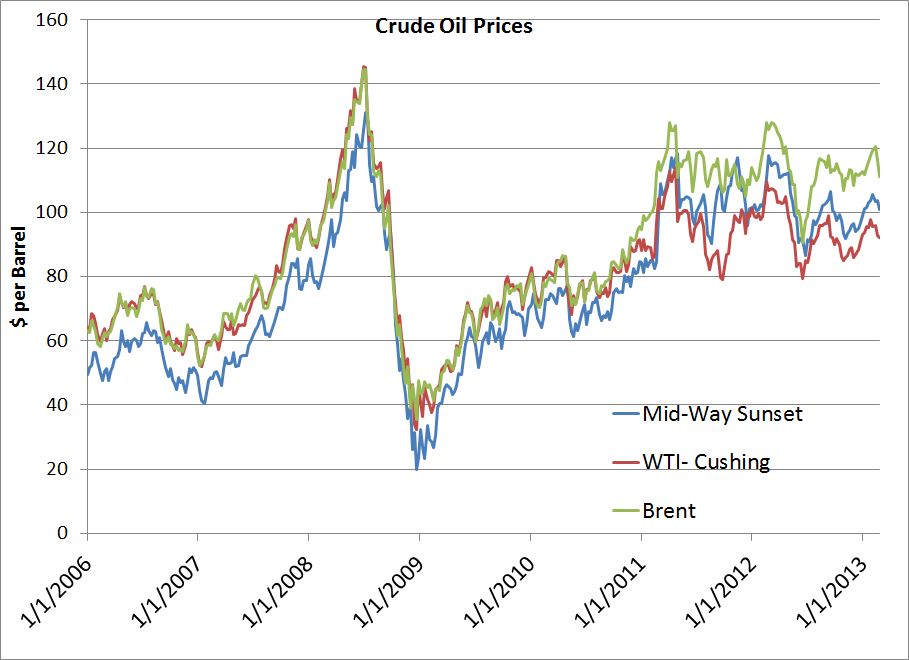 Midway-Sunset blend, named after California’s largest producing field, is a heavy-sour crude oil that exhibits an average API gravity of 12.6 degrees and a sulfur content of 1.6 percent. Heavy-sour crude oils require additional processing at refineries and usually trade at a significant discount to lighter varietals such as WTI and Brent.

But the upsurge in light-sweet oil production from the Bakken Shale and other unconventional plays has upset these traditional price relationships. Whereas Mid-Continent refiners enjoy fat profit margins by purchasing inland crude oils at a discount and selling gasoline and other products at prices that track Brent, their counterparts in California must pay elevated prices for waterborne volumes and Midway-Sunset. (We discussed these trends at length in Profiting from a Second Golden Age for Refiners.)

Unlike the majority of participants in the energy sector, refiners don’t benefit from rising oil prices. Refining is a manufacturing process that converts crude oil into usable products such as diesel, jet fuel and gasoline. Higher oil prices erode refiners’ margins in the same way that rising steel costs are bad news for car manufacturers and rising corn costs squeeze cereal manufacturers’ profitability.

In the US, refiners like Marathon Petroleum Corp (NYSE: MPC) and Valero Energy Corp (NYSE: VLO) that own significant capacity in the Midwest and on the Gulf Coast can access discounted, landlocked crude oils.

At the same time, the US is the world’s largest exporter of refined products; the price of gasoline, diesel and other commodities tends to track the price of waterborne crude oils. Refiners that can purchase landlocked crudes on the cheap and sell diesel and gasoline at high prices are earning fat profit margins. But this advantage does not extend to refiners in California.

To worsen matters, state regulations mandate blends of diesel and gasoline that differ from other states; refinery outages in California can lead to dramatic spikes in local gasoline prices because few facilities outside the region produce the state’s unique fuel blend. The US Energy Information Administration estimates that it takes two to six weeks for California to arrange tanker-borne shipments of compliant fuels.

New regulations will make refining oil in California even more expensive. California’s Assembly Bill 32 (AB32), which passed in 2006, requires the state to progressively institute caps on carbon dioxide emissions that will reduce these releases to 427 million metric tons per annum. Firms that emit less than their cap levels can sell pollution credits to companies that fall short of their goals.

As a result, refiners are reluctant to expand their capacity in the state. Valero Energy, for example, plans to exit the market entirely to focus their capital on operations where they can earn higher returns and face less uncertainty. 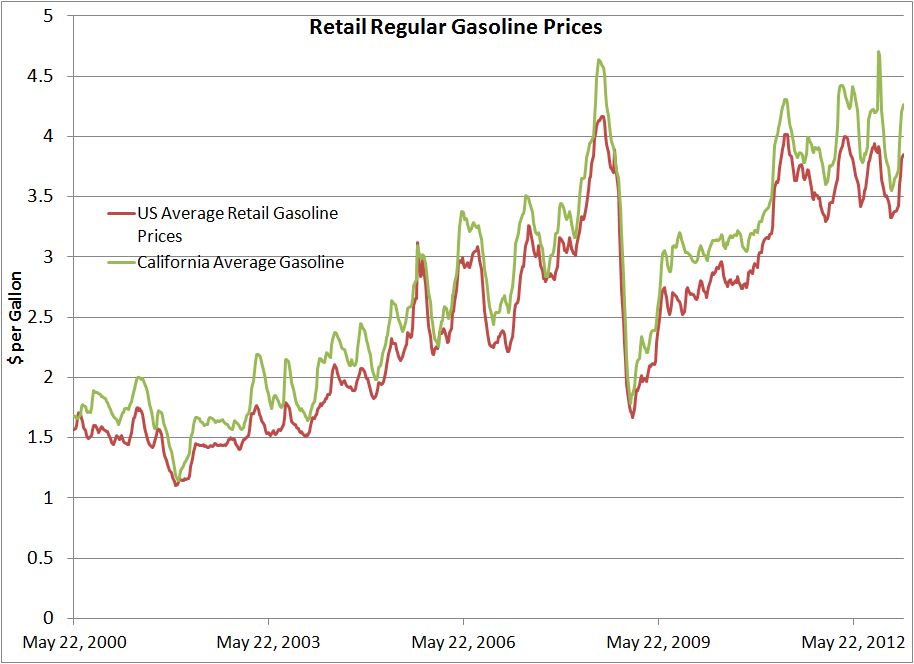 But there’s good news in California: The long slide in in-state oil production that’s made the state increasingly reliant on imported oil may be coming to an end.

The Monterey Shale formation covers more than 1,700 square miles in southern California and contains an estimated 15.42 billion barrels of recoverable crude oil. To put that into context, the Monterey Shale accounts for almost two-thirds of the US Dept of Energy’s estimate for total oil recoverable in the Lower 48. This resource estimate is also four times the reserves in the Bakken Shale, an unconventional play that has catapulted North Dakota to the No. 2 oil-producing state in the US. A handful of major operators are working on ways to extract more oil from the Monterey Shale.

Meanwhile, California’s conventional oil fields are far from exhausted. Producers in the Midway-Sunset play are using steam flooding and other tertiary production techniques to extend the field’s economic life. The shallow Diatomite play–a rock made from the fossilized remains of a hard-shelled type of algae–in Kern County also holds considerable promise.

Best of all, oil producers in California enjoy higher price realizations than operators in the Mid-Continent region.

Prior to the takeover agreement, management had allocated about half its $500 million to $600 million in planned capital expenditures to this acreage and one-third to the Diatomite play.

In addition to its newly acquired assets in California, Linn Energy also owns acreage in high-potential plays such as the Hogshooter formation in Texas and Oklahoma. The master limited partnership also plans to boost its quarterly distribution to $0.77 per unit later this year, pushing the yield to 8.1 percent.

In the next issue of Energy and Income Advisor, we’ll profile a handful of other names that stand to take advantage of high oil prices in California.