Shares of coal producers have languished this year and remain out of favor with investors. But our favorite coal miner’s stock trades at a deep discount and stands to benefit from several upside catalysts in the back half of 2013.

In the US, prices for thermal coal have benefited from the rising price of natural gas. 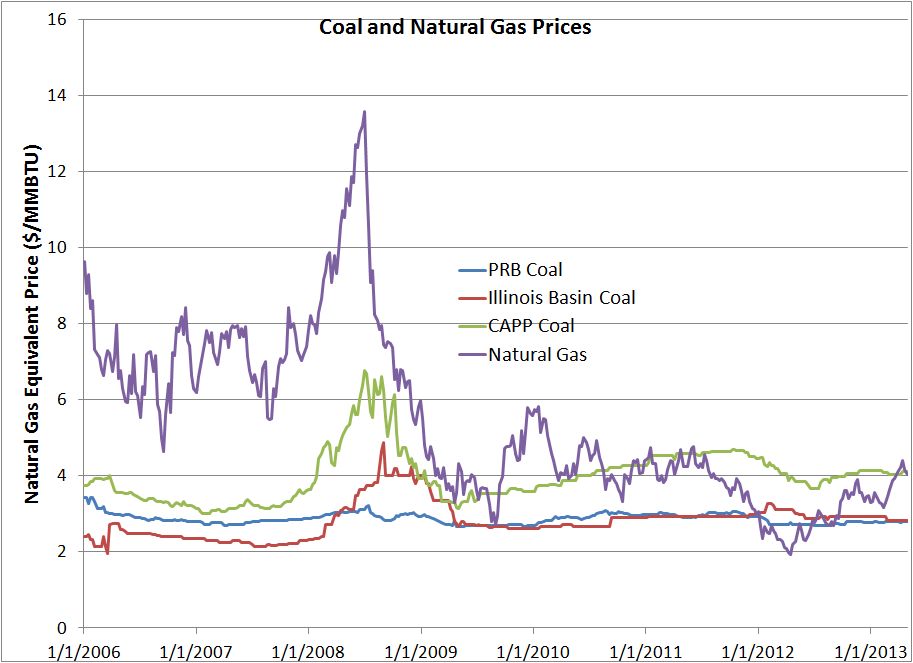 The no-show winter of 2011-12, coupled with robust production, sent natural-gas prices spiraling to $2.00 per million British thermal units, prompting a wave of coal-to-gas switching among utilities.

Depressed natural-gas prices hit coal producers in Central Appalachia (CAPP) the hardest; production costs in the region are higher than in the Illinois and Powder River Basins.

This situation has reversed in 2013: On an energy-equivalent basis, thermal coal from all the major producing areas in the US is less expensive than natural gas.

Coal from the Powder River Basin (PRB), an area in Wyoming and neighboring states, boasts the lowest production costs in the US market because the resource is extracted primarily from surface mines rather than the underground facilities that predominate in Appalachia. In the intermediate term, PRB coal will continue to gain market share in the US thermal coal market at the expense of Appalachian coals.

Demand for coal produced in the Illinois Basin will also increase. Although output from this area tends to contain higher levels of sulfur, the advanced scrubbers installed at an increasing proportion of US power plants make it possible to burn Illinois Basin coal without violating air-quality regulations.

Peabody Energy Corp (NYSE: BTU), which boasts core operations in both these regions, will benefit from utilities switching back to coal from natural gas. 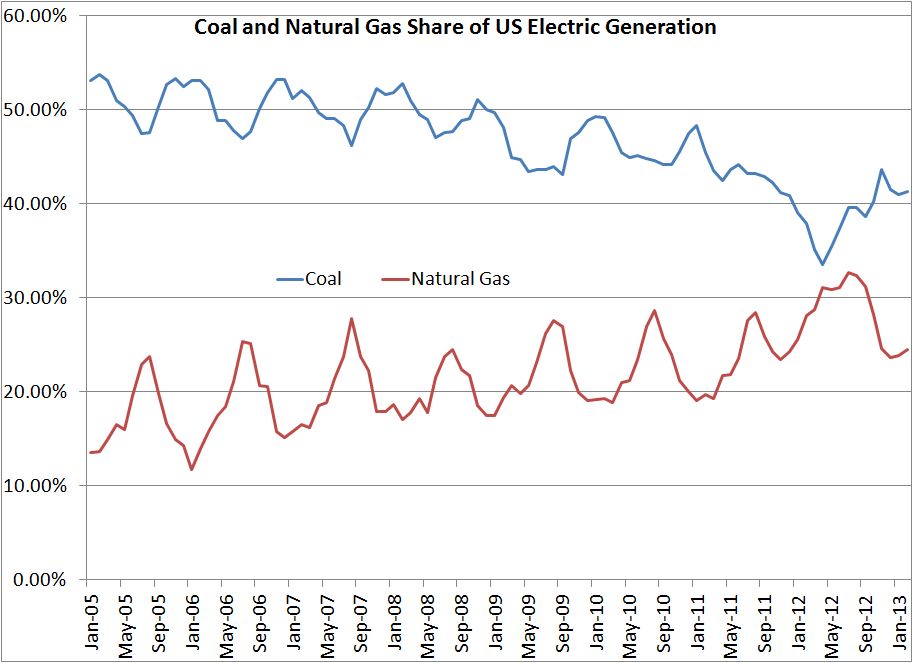 Gregory Boyce, CEO of Peabody Energy, acknowledged as much during a conference call to discuss the company’s first-quarter results:

Now turning to the U.S. markets, we’ve seen a dramatic improvement in coal fundamentals from this time last year. We now project 60 million to 80 million tons of increased coal demand in 2013, as the industry reclaims the majority of demand lost in 2012 to natural gas. Within the U.S. markets, winter was 17% colder than last year.

And natural gas prices have more than doubled from last April, driving a 15 million ton increase in the first quarter coal burn at the same time that gas generation dropped 11%. Coal now accounts for approximately 40% of total generation, while gas has fallen to 24%. The supply side of the equation was also favorable in the first quarter, as U.S. coal shipments fell 10%.

The end result is that PRB and Illinois Basin stockpiles have improved 20% over the last year. And over the next five years, we expect the low-cost PRB and Illinois Basin demand to grow more than 125 million tons through greater capacity utilization and regional switching. And this is after taking into account an estimated 60 gigawatts of retirements during that time.

You see, U.S. generation only ran at 55% of full capacity in 2012. These plants can run much harder, and utilities have invested more than $30 billion in new equipment over recent years to allow them to do just that.

Some pundits have incorrectly suggested that utilities opted to burn more gas and less coal last year because of environmental regulations. But coal-to-gas switching was primarily driven by economics; ultralow natural-gas prices incentivized this shift in feedstock. With the price of natural gas on the rise, Peabody Energy expects coal to eventually regain much of its lost market share.

Boyce’s comments about the retirement of coal-fired power plants are also instructive. As we explained at length in Coal: Down But Not Out, new environmental regulations proposed by the US Environmental Protection Agency will primarily affect the construction of new coal-fired plants and older, smaller facilities where it’s simply uneconomic to install emissions-control equipment.

Some of these power plants will shut down in coming years, but the impact of these closures will be limited; many of these older facilities already run at a fraction of their nameplate capacity. With the US fleet of coal-fired plants running at slightly more than half its nameplate capacity, higher utilization rates at newer facilities should be sufficient to make up for future plant closures.

Outside the US, seaborne thermal-coal prices have languished because of a persistent oversupply and moderating economic growth in China, the world’s largest coal consumer. 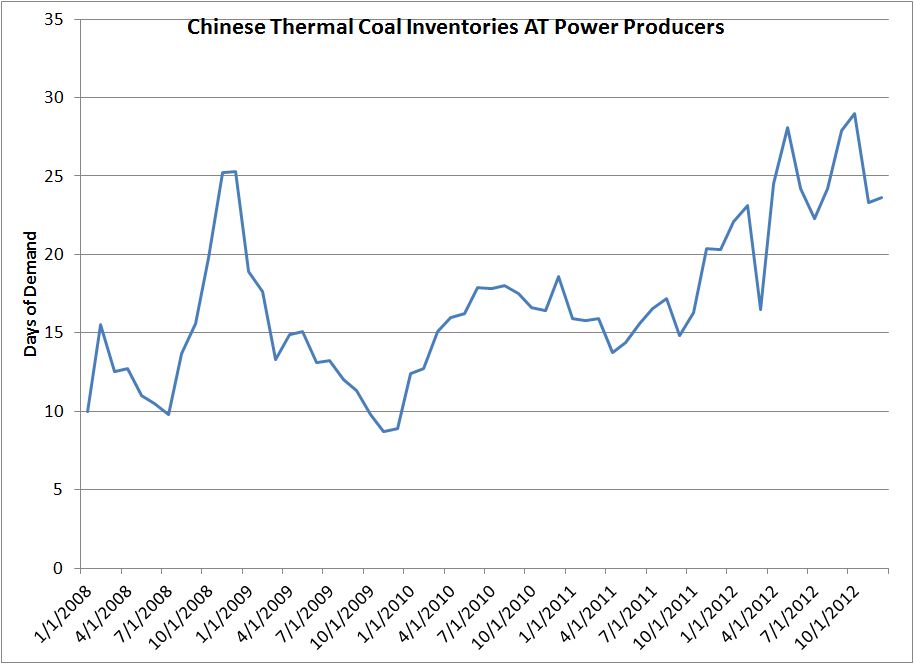 Thermal-coal inventories at China’s power plants remained elevated in the second half of 2012 but had started to decline by December 2012, the last month for which we have data. Nevertheless, these stockpiles likely remain above historical norms, putting pressure on prices.

One of the most important developments to watch in coming months is the fate of a Chinese government proposal to ban imports of low-quality coal that has a heating value less than 4,540 kilocalories per kilogram.

This controversial move faces tough opposition from power producers that claim such a decision would raise costs and reduce competitiveness.

On the other hand, China’s domestic coal producers would likely support such a measure. About 10 percent of China’s coal mines have shut down over the past year because of declining price realizations on their output–a challenge that’s been exacerbated by competition from imports. Under the proposed law, Chinese coal production would also be subject to quality standards, though the contemplated limits would not be as stringent as the rules imposed on imports.

The biggest loser if China goes ahead with the ban would be Indonesia, the world’s leading producer of low-quality thermal coal for seaborne export. 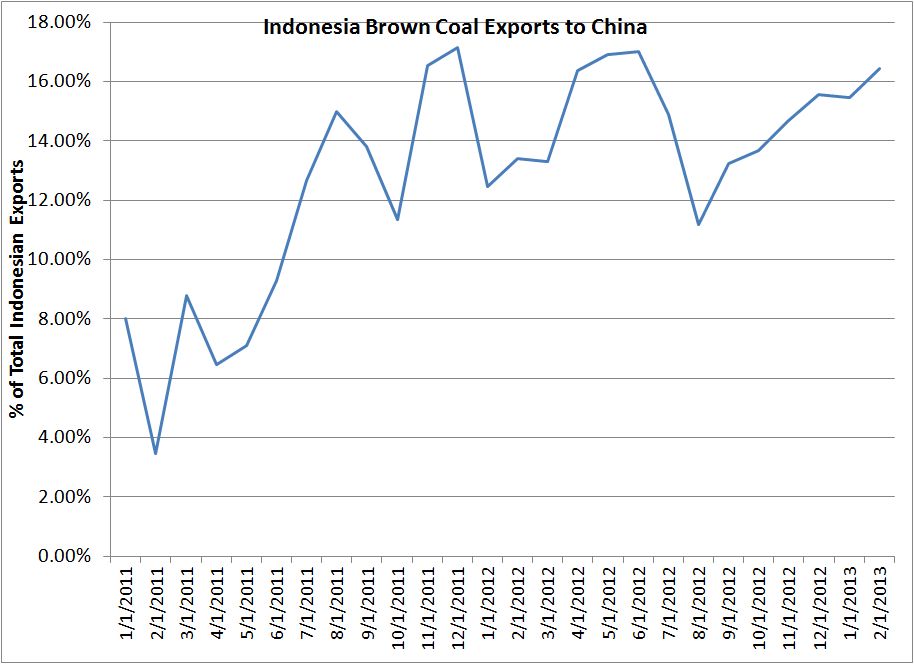 Shipments of low-quality “brown coal” to China account for almost 17 percent of the Indonesia’s coal exports, equivalent to as much as 50 million metric tons of coal per year.

If China were to move forward with these quality standards for domestically produced and imported coal, Indonesia would need to find an alternative end-market for its brown coal, causing major disruptions to seaborne trade in the near term. But such move would ultimately be welcome news for Peabody Energy and other names with coal-mining concerns in Australia, which primarily exports higher-quality varietals.

The price of metallurgical coal (also called coking coal) has tumbled over the past two years. Metallurgical coal from Australia is usually sold under agreements that reprice on a quarterly basis. The current contract price for hard coking coal stands at US$172 per metric ton, compared to a high of about US$330 per metric ton in mid-2011. Prices in the spot market, where volumes of coal are sold on an ad hoc basis, have hovered between US$140 and US$150 per metric ton, suggesting further downside could be in store for the third-quarter contract price.

A confluence of factors has depressed the price of seaborne metallurgical coal. For one, weaker-than-expected economic growth in China will reduce demand for steel and the coal used to fire the production process. Moreover, Tavan Tolgoi, a state-owned entity in Mongolia, has resumed exports of met coal to China after briefly suspending exports late last year, adding to short-term oversupply concerns.

But conditions in the seaborne market for metallurgical coal should improve. Depressed prices have prompted producers to curtail about 30 million metric tons of output, equivalent to about 10 percent of global seaborne trade in the commodity.

Peabody Energy’s management team has emphasized repeatedly that the industry will likely shut in more mines in coming months. One reason that more mines haven’t closed despite weak pricing is that some miners still have longer-term, take-or-pay contracts in place that guarantee superior price realizations. As these agreements expire, producers will further reduce their output.

Peabody Energy’s exposure to pulverized coal injection (PCI) is another advantage. With steel producers looking to reduce costs, they’ve experimented with using more PCI and less metallurgical coal in their furnaces. In 2012 the price of a metric ton of PCI averaged about 69 percent of the cost of a metric ton of hard coking coal; today, this ratio has increased to 80 percent, thanks to robust demand for PCI.

Moreover, Peabody Energy’s operational performance continues to improve. The company made good on management’s promise to reduce its first-quarter Australian mining costs by 10 percent from year-ago levels. The company also lowered its full-year guidance for production costs Down Under to US$80 per metric ton from the low US$80s per metric ton.

Peabody Energy paid down US$100 million of debt in the first quarter of 2013 and another US$100 million at the end of May, making progress toward its stated goal of repaying US$600 million in debt this year. The stock has suffered in recent years because of concerns about the leverage that the firm took on to finance its late 2011 acquisition of MacArthur Coal.

With a dividend yield of 2 percent and a stock price that’s roughly on par with book value, Peabody Energy represents a deep-value play on an eventual recovery in US and global coal markets. Although potential downside appears limited at these levels, prospective investors should note that this trade entails higher risk and could take time to play out.