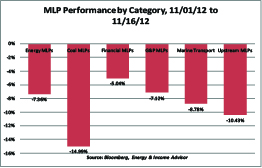 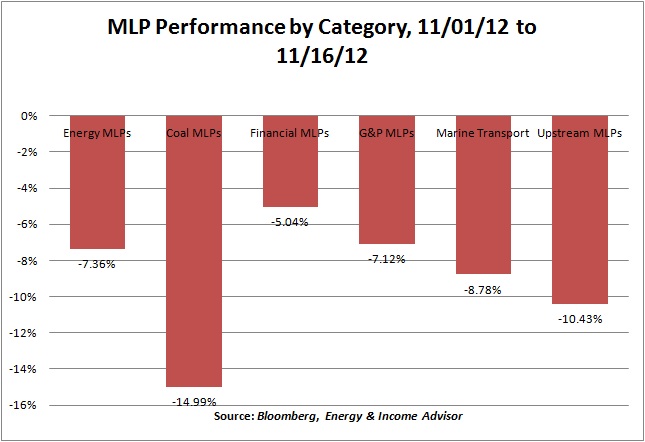 Master limited partnerships (MLP) struggled in the first two weeks of November 2012, with our proprietary, equal-weighted index of every energy-focused MLPs giving up 7.36 percent between Nov. 1 and Nov. 16. By comparison, the S&P 500 rallied 7.33 percent over the same period.

What prompted this sudden wave of selling? Much of the pullback stemmed from profit-taking among investors looking to lock in solid gains before year-end. Securities that offer above-average yields have been in vogue this year, and the Alerian MLP Index reached a record high on Oct. 8, 2012. With investors bidding up the units of many MLPs to frothy valuations, we’re not surprised that some used the outcome of the US presidential election as an excuse to book profits.

Meanwhile, media outlets and other commentators attributed the concentrated weakness in the MLP space to rising concerns that lawmakers will strip the group of their special tax treatment–an unlikely outcome in our view.

Similar to real estate investment trusts, MLPs pass through the majority of their profits, losses and deductions to unitholders, who, in turn, pay personal income taxes on their share of taxable profits. In this way, MLPs investors avoid the double taxation–first at the entity level and then at the individual level–that’s part and parcel with corporate dividends.

We don’t expect the government to rescind this tax advantage.

For one, MLPs will develop much of the midstream infrastructure needed to support rising production from shale oil and gas plays, a key component of the ongoing US energy renaissance and one of the few bright spots in the domestic economy.

At the same time, the revenue that the federal government stands to gain by rescinding this tax advantage would represent a mere drop in the bucket. According to a January 2012 report from the Joint Committee on Taxation, MLPs’ favorable tax status costs the federal government about $300 million in annual revenue.

That being said, private-equity firms that are organized as publicly traded partnerships have found themselves in lawmakers’ sights before. The House of Representatives in December 2009 passed the Tax Extenders Act, a piece of legislation that sought to exclude interest from investment services from the definition of qualifying income. These terms, which ultimately never passed into law, would have prevented private-equity and investment-management firms from organizing as publicly traded partnerships, though the proposal would have granted existing MLPs such as AllianceBernstein Holding LP (NYSE: AB) and Blackstone Group LP (NYSE: BX) 10 years to convert to corporations.

The market evidently doesn’t regard such legislation as a threat in the near term; an equal-weighted index of financial MLPs outperformed energy-related categories in the first two weeks of November 2012.

Negotiations to avoid the looming fiscal cliff could lead to modest modifications to the tax breaks enjoyed by oil and gas companies, some of which would have ramifications for energy-focused MLPs. However, we don’t anticipate any changes that would specifically target publicly traded partnerships or erode the group’s fundamental strength.

As we noted in an Alert issued to subscribers last week, investors should regard these pullbacks as an opportunity to build their position in our favorite energy-focused MLPs. .