The previous two Graphs of the Week–NGL Price Update: The Lighter End of the Barrel and NGL Price Update: Butane and Isobutane–have focused on recent supply-demand trends and their pricing implications for the price of natural gas liquids (NGL) in the US.

The final installment of our three-part series examines the market for natural gasoline, the heaviest of the five major NGLs.

What is Natural Gasoline and Why Should You Care?

Natural gasoline, which is similar in composition to a low-octane motor gasoline, has the distinction of being the only NGL that’s liquid at atmospheric temperatures and pressures and can be transported and stored without pressurized containment, lowering the cost of and barriers to export. The hydrocarbon has three major commercial applications:

Although natural gasoline only accounted for only 13 percent of the NGLs produced by US gas plants in 2012, this hydrocarbon contributes about 30 percent to the market value of a typical mixed barrel of these hydrocarbons. 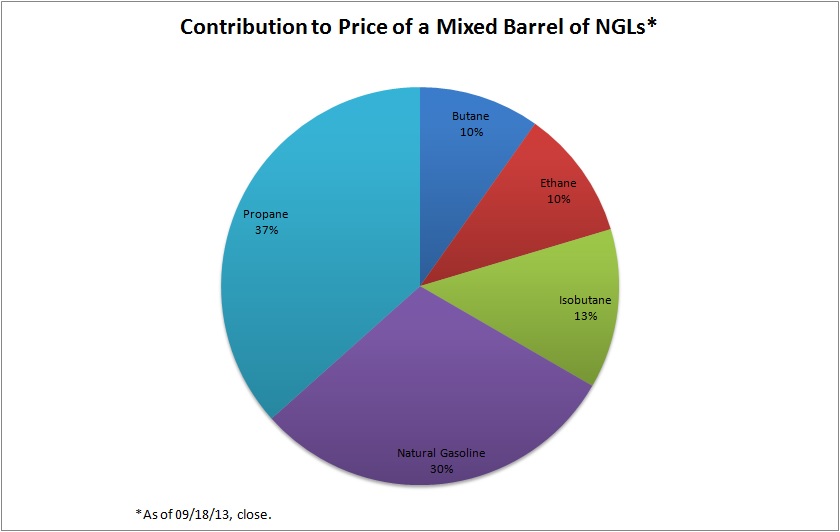 More important, the price of natural gasoline has held up relatively well over the past two years–especially compared to ethane, propane and butane, all of which have endured significant price swoons.

The resilience of natural-gasoline prices has been one of the few bright spots for exploration and production companies with outsized exposure to NGLs and midstream operators whose gas-gathering and -processing contracts entail significant commodity risk.

Investors who own these names have a vested interest in tracking the price of natural gasoline and other NGLs, especially when you consider the challenges that companies face in hedging this exposure.

At the same time, the upsurge in NGL production over the past several years has created opportunities for US petrochemical companies, midstream outfits that have moved to export propane and gasoline blenders that have benefited from lower butane prices. Understanding the outlook for natural gasoline and other NGLs enables the savvy investor to play both offense and defense, identifying profitable opportunities and avoiding areas of weakness.

Like the other hydrocarbons classified as NGLs, US production of natural gasoline has increased meaningfully over the past three years, reflecting upstream operators’ Great Migration from unconventional plays that primarily contain natural gas to liquids-rich basins that offer superior margins.

Domestic output of natural gasoline has ticked up 17.2 percent between 2009 and 2012, while production has increased by 6.9 percent year over year through the first seven months of 2013.

Although the depressed prices of ethane and propane have eroded demand for higher-priced natural gasoline in the petrochemical industry, exports of this hydrocarbon to Canada have surged over the past three years, insulating the commodity from the oversupply afflicting this NGL.

US pipeline exports of natural gasoline surged a whopping 212 percent in 2011 and have climbed 18 percent year over year through the first seven months of 2013. The US exported about 37 percent of its natural-gasoline production in 2012 and 40 percent through July 2013. The vast majority of these volumes are destined for Canada to dilute bitumen produced from Alberta’s oil sands for shipment via pipeline to the US.

Over the past 12 months, a number of trends and developments have raised questions about the growth trajectory of Canada’s demand for US-produced natural gasoline, which largely depends on expanding pipeline capacity to transport diluted bitumen to refineries in the US and Eastern Canada.

The ongoing saga of whether the US government will approve TransCanada Corp’s (TSX: TRP, NYSE: TRP) controversial cross-border leg of the Keystone XL Pipeline and the environmental opposition to Enbridge’s (TSX: ENB, NYSE: ENB) Northern Gateway Pipeline are a big part of this story.

At the same time, Canadian oil and gas producers are increasingly relying on rail to ship their bitumen volumes to the US market, a process that involves less diluent (a 15-to-85 ratio) than transporting this output via pipeline (a 30-to-70 ratio). In select instances, delivering bitumen to market via rail can actually be more cost-effective than moving it via pipeline.

The Environmental Protection Agency’s proposed rules–if approved these requirements would take effect in 2017–to further reduce the permissible amount of sulfur in motor gasoline could also crimp demand for natural gasoline.

Although the price of natural gasoline likely will experience its fair share of volatility in this rapidly changing market, the ease with which this hydrocarbon can be exported overseas–petrochemical companies in Asia would be one potential destination–should provide a release valve that will offset any diminution in North American demand.