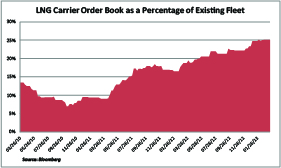 The market for vessels that transport liquefied natural gas (LNG) has been on of the lone bright spots in the marine-transport industry, thanks to rising demand in China and other emerging markets and a upsurge in Japanese imports in the wake of the Fukushima Daiichi nuclear disaster.

In this environment, the supply-demand balance shifted in the favor of shipowners, with daily rates in the spot market–where vessels are engaged on an ad hoc basis–soaring to more than $150,000 from about $65,000 in early 2011 and $20,000 in mid-2010. Day-rates on three- to five-year fixtures also climbed, while the rates associated with long-term contracts ticked up modestly.

More recently, day-rates in the spot market have come under pressure because of unplanned liquefaction outages in Egypt and Nigeria, as well as reduced demand as China’s winter heating season winds down.

However, supply-demand conditions in the near term could push the day-rates earned by LNG tankers in the spot market to less than $100,000 per day for the first time since Japan took its fleet of nuclear reactors offline.

Two factors put pressure on day-rates. First and foremost, a dearth of new LNG export projects coming onstream will limit supply growth over the next two years. At the same time, the order book of new LNG tankers stands at roughly 25 percent of the existing fleet. 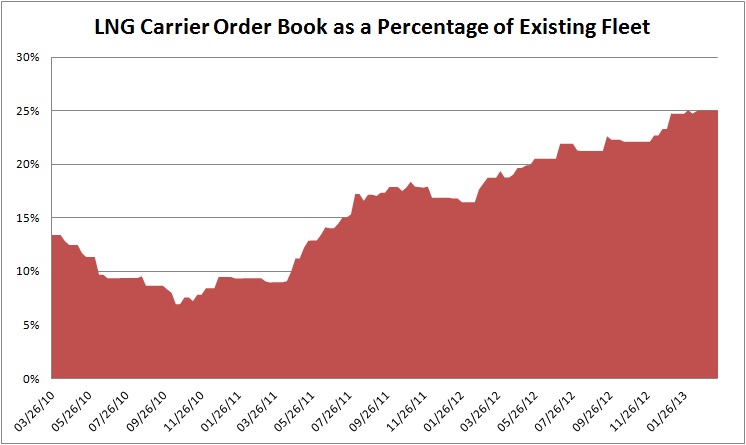 The global fleet of LNG carriers stands at 357 vessels; 65 new ships are on order, about half of which have secured fixtures. The majority of the uncommitted vessels are slated for delivery in the back half of 2013 and throughout 2014.

For this reason, we prefer experienced shipowners that have most of their LNG tankers fixed under long-term contracts. We expect the supply-demand balance in this market to tighten after 2015 as new liquefaction capacity comes online.