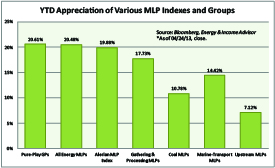 Master limited partnerships (MLP) have enjoyed quite a run thus far in 2013, with the Alerian MLP Index rallying about 19.9 percent and our equal-weighted index of every energy-related publicly traded partnership gaining almost 20.5 percent. In comparison, the S&P 500 has ticked up 10.7 percent since the start of the year, while the Bloomberg North American REIT Index has rallied by almost 12.6 percent.

That’s quite a difference from fall 2012, when a wave of tax-related selling and concerns about the plummeting prices of ethane and propane weighed on the group. In November Brings the Pain, we reiterated our bullish outlook for MLPs that own infrastructure-related, citing investors’ demand for above-average yields and robust demand for additional takeaway capacity to support the ongoing shale oil and gas revolution.

In this Graph of the Week, we use our proprietary indexes to examine which segments have led the charge and which have lagged the pack. 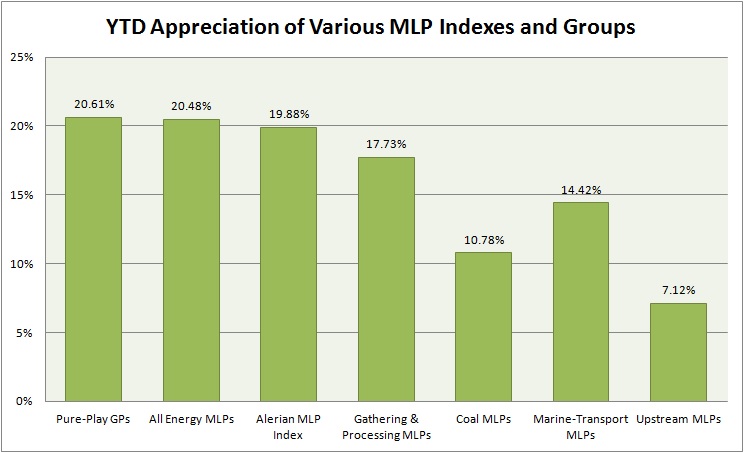 The MLP structure often comprises two entities: a limited partnership that owns the underlying assets and a general partner (GP) that’s responsible for managing the operating entity. In addition to a minority stake in the limited partnership, the general partner holds incentive distribution rights (IDR) that entitle it to an incrementally higher percentage of the LP’s distributable cash flow as the payout reaches certain predetermined thresholds. (See MLP Basics: Incentive Distribution Rights Explained.)

As my colleague Elliott Gue explained in Investing in MLPs: Yield versus Distribution Growth, investors shouldn’t overlook the power of a growing payout, which boosts current returns and drives price appreciation.

On the opposite end of the spectrum, units of upstream publicly traded partnerships–names that own and operate hydrocarbon-producing properties–have continued to lag their peers, reflecting concerns about weak commodity prices and growing ethane rejection at gas-processing plants.