Ever since exploration and production outfit Apache Corp (NYSE: APC) in 1981 consolidated 33 of its oil and gas operations into the first master limited partnership (MLP), income-seeking investors have flocked to this security class for above-average yields and significant tax advantages.

Publicly traded partnerships don’t pay federal income taxes at the corporate level. As pass-through entities, MLPs distribute the majority of their income to public untholders, who, in turn, pay taxes on their share of this disbursement at their individual rate. This structure effectively avoids the double taxation of corporate dividends, which are taxed at the entity and shareholder level.

With no limitations on what assets and operating businesses could adopt the MLP structure, the universe of publicly traded partnerships expanded rapidly in the early to mid-1980s and included restaurants, nursing homes, shopping centers, forest products and amusement parks. Even professional sports teams joined the fray, with the owners of the Boston Celtics raising $48 million through the initial public offering of Boston Celtics LP.

Alarmed by the upsurge in companies converting to MLPs or spinning off assets into this tax-advantaged structure, Congress passed the Tax Reform Act of 1986 and the Revenue Act of 1987, which sought to prevent a diminution of the corporate tax base. This legislation requires publicly traded partnerships to generate at least 90 percent of their gross income from “qualifying” sources, the majority of which relate to the production, processing and transportation of oil, gas and other natural resources.

An Expanded Interpretation of Qualifying Income

The IRS on Oct. 12 published a private letter ruling (PLR) in response to a query from an unidentified publicly traded partnership about whether revenue generated by processing natural gas liquids (NGL), primarily ethane and propane, into olefins would constitute “qualifying income.”

The two most prominent olefins, ethylene and propylene, serve as the basic building blocks for three-quarters of all chemicals, plastics and synthetic fibers. Petrochemical firms produce these commodity chemicals in cracking facilities, the majority of which are located on the Gulf Coast, that heat ethane and propane with steam.

In its response, the IRS confirmed that “income derived by X [the unidentified MLP] from processing NGLs into olefins would constitute qualifying income…, as would income derived by X from marketing, transporting, and storing olefins.” The rationale behind this decision echoed previous rulings that ostensibly expanded the scope of permissible activities in the MLP space:

The IRS concluded that income derived by X from processing NGLs into olefins would constitute qualifying income under I.R.C. § 7704(d)(1)(E), as would income derived by X from marketing, transporting, and storing olefins. Qualifying income included income and gains derived from the exploration, development, mining or production, processing, refining, transportation (including pipelines transporting gas, oil, or products thereof), or the marketing of any mineral or natural resource (including fertilizer, geothermal energy, and timber).

Although the guidance provided in the PLR technically applies only to the taxpayer that submitted the request, these interpretations provide MLPs and prospective publicly traded partnerships with useful insight into how the IRS interprets the tax code.

In conference calls to discuss third-quarter results, management teams from Dow Chemical, Eastman Chemical (NYSE: EMN) and LyondellBassell Industries acknowledged that they would evaluate this option but emphasized that figuring out the logistics of such a move would take some time.

Not only are these firms’ ethane and propane crackers integrated into their operations, but the depreciation allowances available on these existing assets–a key component of the tax deferrals that appeal to many MLP investors–are also negligible relative to newly built facilities. (In High Yields and Low Taxes, we discuss how depreciation and other deductions that the Internal Revenue Service classifies as a return of capital can enable investors to defer some of their tax obligations on MP distributions.)

Moreover, we must consider the twin factors that usually motivate a company to spin off eligible assets in a publicly traded partnership: financial need and the likelihood that these operations will command a higher valuation in an MLP structure.

Questions abound as to whether a publicly traded partnership that’s a pure play on ethane and propane cracking would achieve a sufficient valuation premium to make the spin-off worthwhile.

Olefin production is a capital-intensive business where profitability hinges on scale and feedstock costs. Given the challenges associated with directly hedging exposure to NGL prices, we’d expect ethane and propane crackers to garner valuations that are on par with refineries and other cyclical businesses with significant exposure to commodity prices.

Rather than viewing the potential for US petrochemical companies to shift assets to the MLP structure as a meaningful upside catalyst, investors should focus on the industry’s strong fundamentals.

Not only do shares of well-positioned US olefin producers stand to benefit from temporary declines in ethane prices and near-term investments in capacity expansions, but, more important, the group also enjoys a substantial cost advantage over peers with production facilities in Asia and Europe.

Whereas ethane and propane account for about 90 percent of the feedstock used at cracking facilities in the US, petrochemical plants in Western Europe generate more than 70 percent of their ethylene from naphtha, natural gasoline and other petroleum derivatives that hinge on the price of Brent crude oil.

Upstream operators’ predictable stampede into liquids-rich basins–a product of depressed natural-gas prices–has catalyzed a dramatic increase in domestic NGL production. In 2011 overall NGL output hit a record 2.183 million barrels per day, up 22 percent from 2008 and 6.3 percent from 2010. Meanwhile, the November 2012 edition of the Energy Information Administration’s Short-Term Energy Outlook calls for NGL production to hit 2.35 million barrels per day in 2012, a year-over-year increase of about 8 percent. Ethane and propane, which accounted for almost 70 percent of US NGL output in 2011, continues to drive the bulk of this production growth.

This upsurge in ethane and propane production increases the market’s vulnerability to temporary demand disruptions. Ethane prices, for example, tumbled in the first half of 2012 because of routine maintenance and repair at several ethylene production facilities. Midstream operators expect the uneven rollout of processing, fractionation and petrochemical plants should ensure that the domestic ethane market remains favorable for petrochemical companies.

In general, the demand for ethane is meeting our projections in both the near term and [the long term] with all the new build announcements. But with most drilling now concentrated on rich gas and oil, supplies have exceeded our expectations. That said, ethane cracking is clearly the most profitable feedstock of petrochemicals, and we don’t need to look at too many of their presentations and press releases to realize that they get it. Because I know we are likely to get questions about ethane, yes, it appears ethane will be oversupplied until new-build ethylene plants come online [in 2014 or 2015].

For these reasons, we remain bullish on the outlook for petrochemical companies with significant ethylene production facilities in the US. However, the market’s enthusiasm for these names after the IRS’ guidance regarding ethylene and propylene production obscures more meaningful upside drivers.

However, the IRS’ ruling will likely have important implications for existing MLPs. Enterprise Products Partners’ CEO also emphasized that the future would likely bring “a lot of opportunities on the demand side of the equation.” We expect more MLPs to take advantage of the IRS ruling, particularly related to the transportation of olefins.

We’ve already seen some MLPs move in that direction. Williams Partners LP (NYSE: WPZ) announced plans to purchase its general partners’ 83 percent interest a olefin production facility in Geismar, La. The company will also assume responsibility for funding the ongoing expansion of this facility, which is expected to be completed in the third quarter of 2013. This drop-down transaction will also include a propylene splitter and associated pipelines.

But perhaps an even bigger takeaway from this announcement is the upsurge in taxpayers seeking clarification from the IRS about assets and activities that generate “qualifying income” that’s suitable for an MLP. 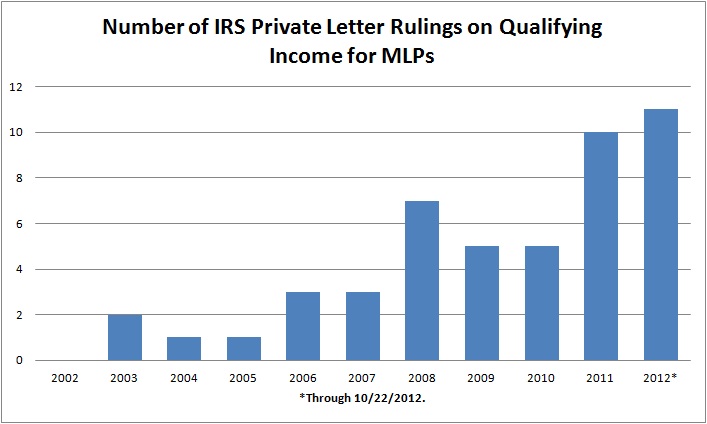 This jump in private letter rulings related to qualifying income demonstrates the appeal of the MLP structure and the growing breadth of this investable universe. This year has already brought the initial public offering of the first MLP to own deepwater drilling rigs and the first publicly traded partnership to specialize in sand for hydraulic fracturing.

We expect this trend to continue, as corporations and private-equity firms seek to monetize energy-related assets and take advantage of investor demand for securities with above-average yields and tax advantages.