There’s no easy answer to the deceptively simple question, “What’s the price of crude oil?”

Many US investors will tell you that oil fetches about $86 per barrel–the current price of near-month futures traded on the New York Mercantile Exchange (NYMEX). On the other hand, a European might tell you that oil goes for $108 per barrel. Both answers are partially correct, but neither quote truly encapsulates conditions in the global crude oil market.

Hundreds of different types of crude oil trade at various hubs throughout the world. The widely traded West Texas Intermediate (WTI) crude oil serves as the benchmark for US oil prices and underpins NYMEX-traded futures. A light-sweet crude oil, WTI has an American Petroleum Institute (API) gravity of 39 degrees, a sulfur content of 0.34 percent and a pour point of minus 5 degrees Fahrenheit.

The pour point refers to the lowest temperature at which the oil will continue to behave as a liquid; varietals with lower pour points exhibit less viscosity and tend to fetch higher prices.

This table lists a number of oil benchmarks as well as their current prices and physical characteristics.

Traders also tend to differentiate between various light-sweet crude oils. For example, Brent crude oil historically has traded at a discount of $1 per barrel to $2 per barrel relative to WTI because of its slightly lower API gravity and higher sulfur content.

But the traditional price relationships between various oil benchmarks in the Americas have deteriorated in recent years. WTI crude oil, for instance, commands about $20 per barrel less than Brent crude oil. Meanwhile, the price spread between Western Canada Select (WCS) and Mexican Maya–two heavy-sour crude oils with similar specific gravities and sulfur content–has ballooned to more than $20 per barrel.

These wide basis differentials reflect a larger trend underway in North America: rapidly growing oil production from unconventional fields in the US and Canada. Not only has US oil production increased for the first time in almost three decades, but domestic output has grown for three consecutive years. 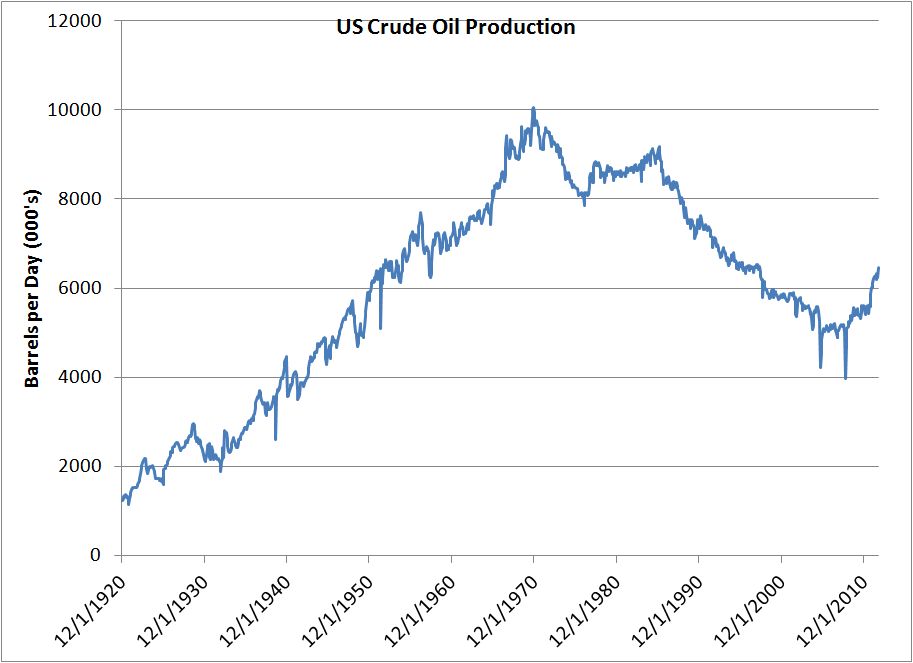 With the exception of a short period in the late 1970s and early 1980s, US production has declined steadily. But over the past three years, horizontal drilling and hydraulic fracturing fracturing have unlocked vast oil reserves in unconventional fields such as the Bakken Shale of North Dakota and the Eagle Ford Shale in southern Texas.

The Bakken Shale contains light-sweet crude oil that has an API gravity of 39 degrees and sulfur content of 0.18 percent, making it of similar quality to WTI. Surging production from this play and Canada has overwhelmed available takeaway capacity in the Midcontinent region, leading to a supply overhang at the hub in Cushing, Okla., the delivery point for WTI crude oil.

This upsurge in supply, coupled with insufficient midstream infrastructure to transport oil to the Gulf Coast from the Midcontinent region, has depressed the price of WTI, Bakken UHC and other landlocked grades of light-sweet crude oil relative to similar quality volumes delivered to coastal refineries.

As I explained in Moving to Canada, the recent price history of WCS crude oil underscores the extent to which pipeline-capacity constraints and shifts in oil production patterns can widen basis differentials. 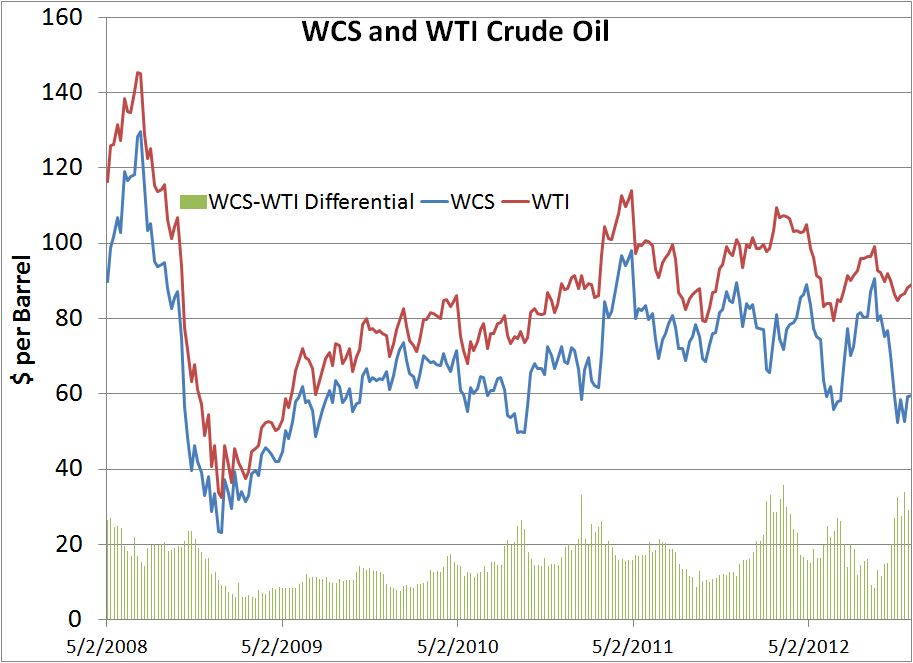 Since mid-2008, the price spread between WTI and WCS crude oil has averaged $16 per barrel, reflecting the latter’s lower API gravity and higher sulfur content. But this differential has soared to $30 per barrel in recent months.

This anomaly reflects temporary midstream and downstream capacity outages, not a durable trend.

In late October and early November, TransCanada Corp (TSX: TRP, NYSE: TRP) reduced throughput on its Keystone pipeline, which transports oil from western Canada to Illinois, to investigate whether the system had sprung a leak. Fellow midstream operator Enbridge (TSX: ENB, NYSE: ENB) likewise announced that excess demand had forced the firm to ration capacity on one of its pipelines that stretches from western Canada to the Midwestern US.

Meanwhile, BP (LSE: BP, NYSE: BP) curtailed operations at its refinery in Whiting, Ind., for maintenance and repairs prior to a planned expansion of the facility that will come onstream in mid-2013. Designed to process lower-quality grades of crude oil, this facility refines large volumes of imported WCS. Pipeline bottlenecks and reduced throughput at Whiting will ensure that the differential between the price of WCS and WTI remains elevated in the near term.

Countries outside North America haven’t experienced the same pricing pressures as the US and Canada because they lack the benefit of a rapidly increasing domestic supply of oil. That’s why Brent crude oil tends to trade at close to the same price as light-sweet crude oil from the Middle East or Africa.

Wide basis differentials for oil in North America have significant implications for several industries. Within the upstream segment, investors should keep an eye on where particular operators market their output. For example, a firm that produces oil in a coastal market such as California will likely enjoy price realizations that are closer to Brent, while an operator in North Dakota will sell the majority of its output at prices that follow WTI.

Enbridge and Enterprise Products Partners LP (NYSE: EPD) reversed the flow on their jointly owned Seaway pipeline on May 17, 2012. Seaway is a 500-mile line built in 1976 that stretches from Cushing, Okla., to Freeport, Texas, and originally was designed to move oil from the Gulf Coast to Cushing. To alleviate the glut of crude in Cushing, however, the partners reversed Seaway to transport oil from Cushing to the Gulf, a route that’s in much higher demand.

Refiners have benefited the most from widening basis differentials, which explains why  the Bloomberg North American Refining and Marketing Index has rallied almost 80 percent year to date, compared to the roughly 15 percent return posted by the S&P 500 and the S&P 500 Energy Index’s 4.6 percent gain.

Refineries convert crude oil into refined products such as gasoline and diesel. Contrary to popular belief, refiners don’t benefit from rising crude oil prices; rather, these downstream operations benefit when the price of their output is high relative to the price of oil.

Widening basis differentials give well-positioned refiners the tremendous advantage of purchasing discounted WTI crude oil and selling refined products at prices that tend to be correlated to the cost of coastal benchmarks such as Louisiana Light Sweet (LLS) and Brent crude oil. Midwestern refineries that can process WCS and other heavy-sour crude oils can purchase their inputs at a price that’s more than $50 per barrel less than LLS and Brent.

Investors should be on the lookout for a near-term correction in refining stocks. The first Seaway expansion should help to moderate the unusually wide spread between WTI and Brent crude oil prices–a widely watched basis differential that has driven investor interest in the group. The months of December and January historically have been a period of seasonal weakness for refiners.

That being said, basis differentials should remain elevated over the long term, supporting higher profitability for North American refiners with operations in geographically advantaged regions and the technological flexibility to handle discounted grades of crude. We will monitor this theme closely in early 2013.