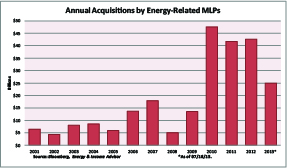 The members of the Alerian MLP Index, a capitalization-weighted basket of 50 energy-related master limited partnerships (MLP), have increased their gross quarterly distributions at an average annual rate of 8.5 percent over the past five years–one of the main drivers of the benchmark’s outperformance.

A confluence of salutary factors has fueled this outsized distribution growth. The shale-oil and -gas revolution has led to an upsurge in domestic hydrocarbon production that has overwhelmed existing midstream infrastructure (pipelines and processing), giving MLPs ample opportunity to pursue organic growth projects. At the same time, the Federal Reserve’s commitment to keeping interest rates near zero and quantitative easing has dramatically lowered MLP’s cost of capital in the equity and bond markets. Low borrowing costs, coupled with a huge opportunity set, have contributed to growth.

Mergers and acquisitions have also been an important part of the growth story for MLPs. Over the past decade, the current universe of publicly traded partnerships has closed 682 transactions–a total value of $226.72 billion. Deal flow has been particularly robust over the past three years, reaching a record $47.6 billion in 2010. With the group having completed or announced $25 billion worth of acquisitions thus far in 2013, we expect transaction volume and value in the MLP space to be on par with recent years. 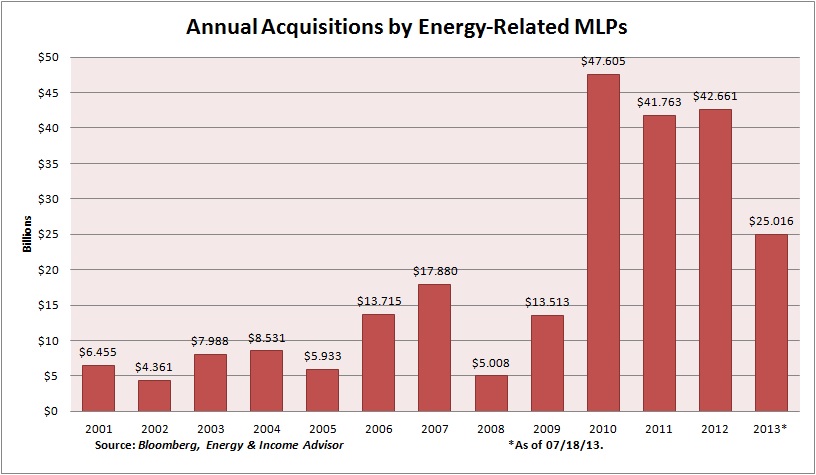 Although the types of assets acquired by publicly traded partnerships haven’t changed in general–midstream and upstream still predominate–the past two years have brought an uptick in whole-company takeovers, including several acquisitions of fellow MLPs.

Note that this table omits the 2008-10 upsurge in MLPs buying out their publicly traded general partners to lower their cost of capital and improve their competitiveness. (We discussed this trend at length in Profit from General Knowledge.) We also included Kinder Morgan Inc’s (NYSE: KMI) fall 2011 acquisition of El Paso, as the general partner ultimately plans to drop down all these assets to El Paso Pipeline Partners LP (NYSE: EPB) and Kinder Morgan Energy Partners LP (NYSE: KMP). 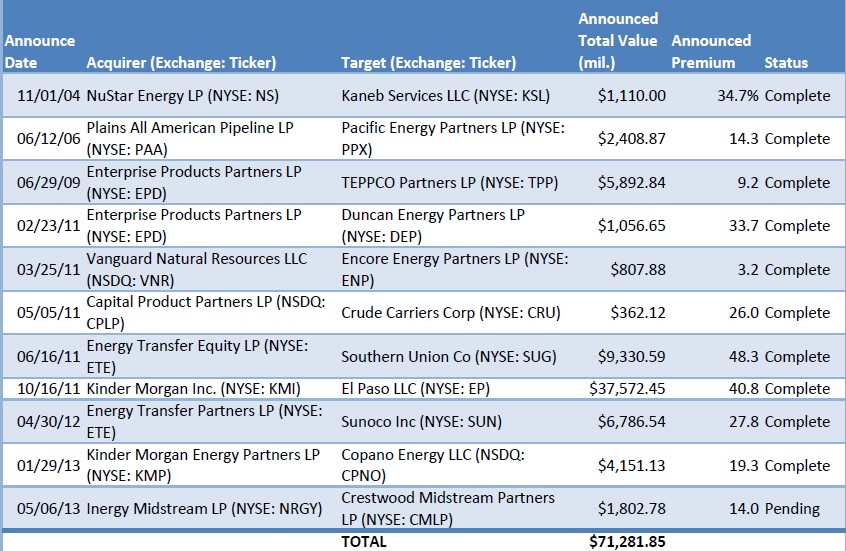 We still expect asset-specific acquisitions and purchases of companies incubated by private-equity outfits to account for the majority of deal flow in the MLP space, but we also expect takeovers of fellow publicly traded partnerships to tick up in coming years. Not only do larger MLPs such as Kinder Morgan Energy Partners and Energy Transfer Partners LP (NYSE: ETP) rely on acquisitions to move the needle on distributable cash flow, but this niche is ripe for consolidation.

In this week’s forthcoming installment of Energy Investing Weekly, we’ll highlight a handful of MLPs that could be potential takeover targets.