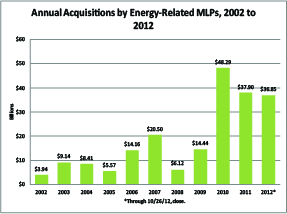 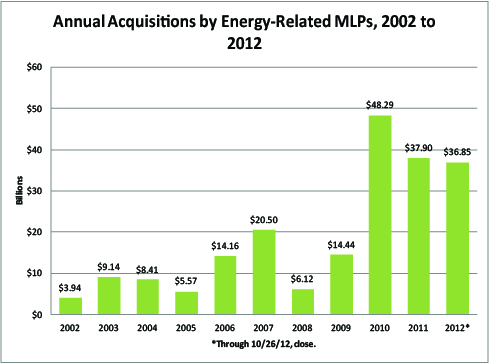 Ready access to capital over the past several years has fueled an upsurge in mergers and acquisitions activity among MLPs. Through Oct. 26, 2012, the 86 energy-related publicly traded partnerships had announced $36.85 billion in acquisitions. With two months remaining in the year, the group is within striking distance of surpassing the $37.9 billion worth of transactions announced in 2011. That being said, we don’t expect MLPs to eclipse the record $48.29 billion in deals that took place in 2010.

This year, MLPs have spent $16.58 billion on acquiring pipeline assets, $7.45 billion on oil refining and marketing assets and $4.96 billion on assets related to exploration and production.

Although pipeline acquisitions are the perennial favorite in the MLP universe, the strength in oil refining and marketing assets and paucity transactions involving gas distribution and transportation assets- popular targets last year–reflect the bullish outlook for assets that handle the nation’s growing domestic oil production.

This upsurge in deal-making, coupled with ample organic growth opportunities related to handling the increasing hydrocarbon outfit from shale oil and gas plays, has continues to drive distribution growth among energy-related MLPs.

Little wonder that the Alerian MLP Index has generated a total return of 87.6 percent over the past three years, outperforming the Bloomberg North American REIT Index (80 percent) and the Philadelphia Stock Exchange Utility Index (41 percent).

Elliott Gue will host the Energy & Income Advisor’s next Live Chat on Nov. 15, 2012, at 2:00 p.m. EST. This is your opportunity to ask Elliott questions about the latest developments in the economy and energy patch. Click here for more details about the chat and to sign up for an email reminder about the event.