Is There an MLP Bubble? 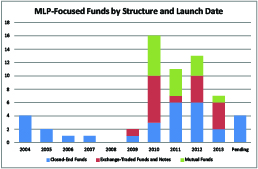 Two days of meeting with management teams at the National Association of Publicly Traded Partnerships’ (NAPTP) annual investor conference gave us a lot of insight into individual master limited partnerships (MLP). However, one question loomed large during our two-hour car ride to New York: Is there an MLP Bubble?

Attendance at the NAPTP conference surged by 38 percent from a year ago, to more than 1,100–a testament to rising investor interest in the space. (We explored the factors driving the popularity of publicly traded partnerships in The Appeal of Investing in MLPs.)

Meanwhile, the number of fund products that allocate a significant portion of their investable assets to MLPs continues to swell. In 2012 asset management firms and investment banks have rolled out seven new funds focused on this security class. 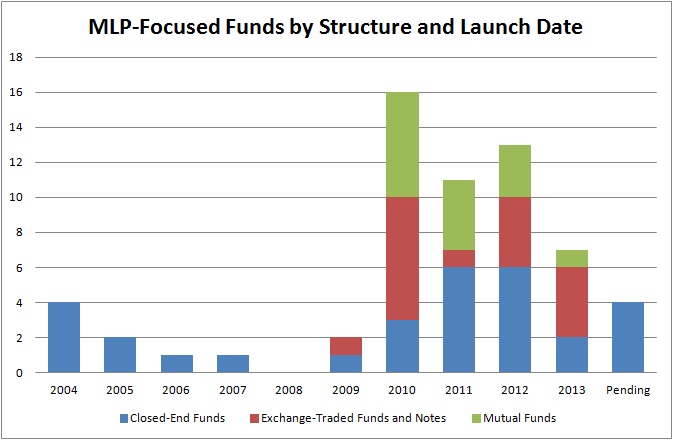 The rate of MLP initial public offerings (IPO) has accelerated over the past few years as companies seek to take advantage of investors’ demand for the above-average yields and tax advantages associated with the security class. Seven MLPs have gone public thus far in 2013, compared to only one by this point in 2012. 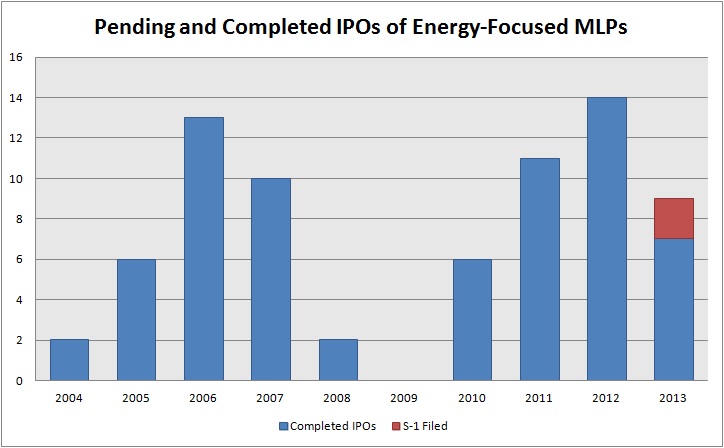 And although the number of prospective publicly traded partnerships that have filed publicly accessible registration statements with the SEC stands at only two, industry scuttlebutt suggests that the pipeline of potential IPOs will grow in coming quarters.

The security class has been on a tear this year: The Yorkville MLP Universe Index, a capitalization-weighted basket of every publicly traded partnership, has generated a total return of 25.8 percent, outpacing the 16.7 percent gain posted by the S&P 500. Over the past week, 38 of the 98 energy-focused MLPs in our coverage universe have rallied to a new 52-week high.

Although valuations in the MLP space appear frothy and the group is overdue for a correction, any MLP bubble remains in the inflationary stages.

Yes, the number of MLPs that engage in nontraditional businesses or that pay variable distributions has grown in recent years. And several recent IPOs appear to be thinly disguised cash grabs aiming to take advantage of MLP mania.

But one of our biggest takeaways from the NAPTP conference suggests that there’s more upside to come: The majority of the management presentations that we attended outlined credible plans to grow cash flow and quarterly distributions, especially in the midstream space.