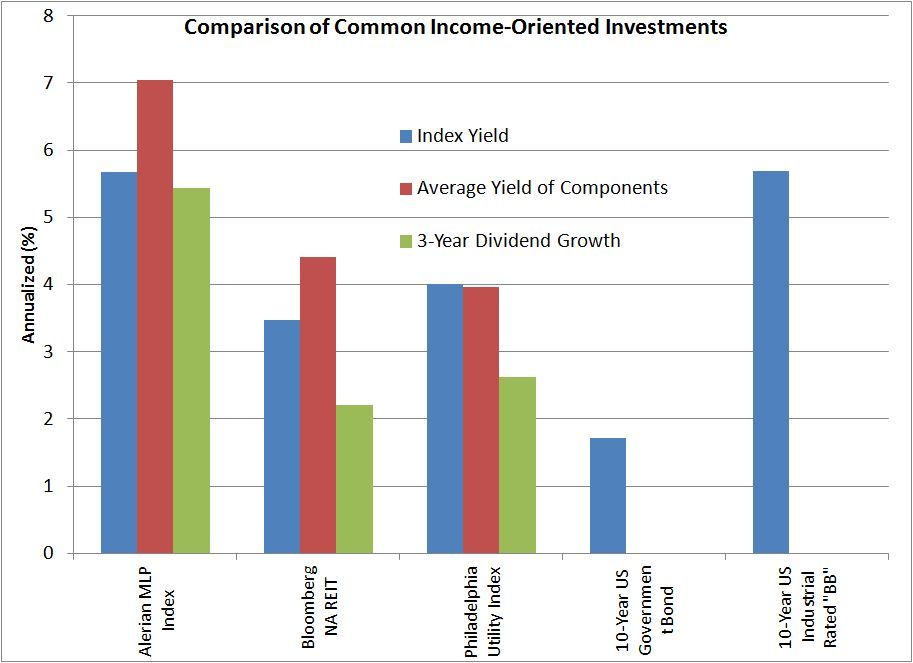 By either measure, the Alerian MLP Index offers a superior yield to security classes favored by many income-seeking investors. Neither the Bloomberg North American REIT Index, which tracks a group of 126 real estate investment trusts, nor the Philadelphia Stock Exchange Utility Index, which comprises 20 electric utilities, can compete with the MLP benchmark on yield.

However, basing your investment decisions solely on which MLPs offer the highest yields is a flawed strategy; these stocks tend to entail significant risk. Buying units of a high-yielding MLP without a thorough analysis of the sustainability and growth prospects of the underlying business is one of the most reckless strategies any investor can pursue.

History suggests that losses sustained when a high-yielding MLPs cuts its distributions will more than offset the high yields offered by other stocks in your portfolio.

I examined historical returns for all 50 stocks in the Alerian MLP Index and 27 other MLPs from the first quarter of 2005 to the third quarter of 2012. The size of this universe ranged from about 30 stocks in 2005 to 67 stocks this year.

First, I looked at a simple strategy that involved sorting the investable universe by indicated yield, buying the top 20 percent and rebalancing the portfolio every quarter to take an equal weight position in the highest-yielding names. The indicated yield is calculated by determining the MLP’s most recent quarterly distribution, annualizing it and then dividing by the stock price. 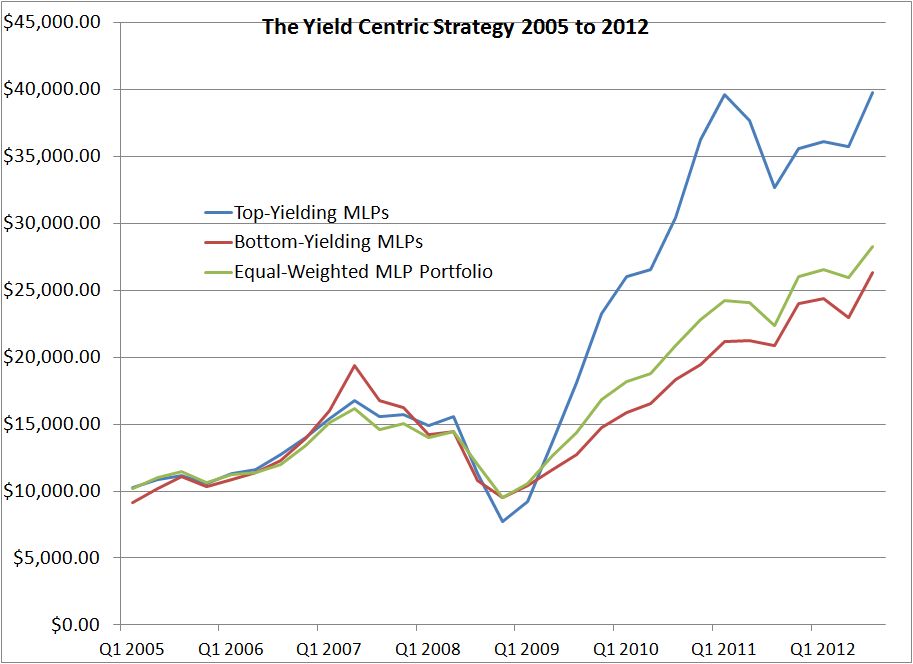 At first blush, these results affirm the validity of a yield-centric strategy. An investor who placed $10,000 in the top quintile of MLPs ranked by yield would have grown his or her portfolio to more than $39,800 by the end of the third quarter of 2012.

However, all of the yield-centric strategy’s outperformance stems from strong gains in the final three quarters of 2009, when the stock market rallied furiously after imploding in late 2008 and early 2009. For example, the highest-yielding names in the investable universe soared more than 48 percent in the second quarter of 2009 and gained roughly 33 percent in the back half of the year.

Consider two of the top-performing names from the final three quarters of 2009.

At the end of March 2009, Atlas Pipeline Partners LP (NYSE: APL) fetched $3.92 per unit–well off its 2008 high of more than $50 per unit. In February 2009, the MLP disbursed a quarterly distribution of $0.38 per unit ($1.52 annualized), which equates to an indicated yield of 38.8 percent. The stock traded at a depressed valuation because many investors feared that Atlas Pipeline Partners would be forced to reduce or eliminate its quarterly payout.

The publicly traded partnership owns and operates assets that gather and process natural gas, a business that can involve significant exposure to fluctuations in commodity prices.

Small-diameter gathering pipelines connect individual wells to gas-processing plants and the pipeline network. Accordingly, cash flow in this business line hinges on robust drilling activity; an uptick in completions translates into an increase in new wells that must be connected to the system. With oil and natural gas prices plummeting in late 2008 and early 2009, producers had little incentive to boost drilling activity.

Processing plants separate natural gas liquids (NGL)–a heavier group of hydrocarbons that includes propane, ethane and butane–from the raw natural gas. The degree to which this business is exposed to fluctuations in commodity prices hinges on how the processor structures its contracts with producers. At the time, the industry favored agreements that compensated processors based on the value of NGLs produced.

Given the severe drop in commodity prices that occurred in late 2008 and early 2009, the market feared that gathering and processing firms with significant exposure to commodity prices might be forced into bankruptcy.

Nevertheless, cutting the quarterly distribution to zero and divesting some assets ensured that Atlas Pipeline Partners survived these dark days and ultimately recovered. As commodity prices began to rally, the stock surged by more than 109 percent in the second quarter alone.

The unit price of Crosstex Energy LP (NSDQ: XTEX), which also owns gathering and processing assets, tumbled to a low of $1.90 in late March 2009–a stunning reversal from its 2008 high of more than $30 per unit. With commodity prices on the rise, the stock surged 64 percent in the second quarter of 2009, though the MLP didn’t reinstate its distribution until the end of 2010.

Needless to say, the success of the yield-centric investment strategy changes considerably if we remove 2009 from the equation and only consider the 2005-08 and 2010-12 periods. 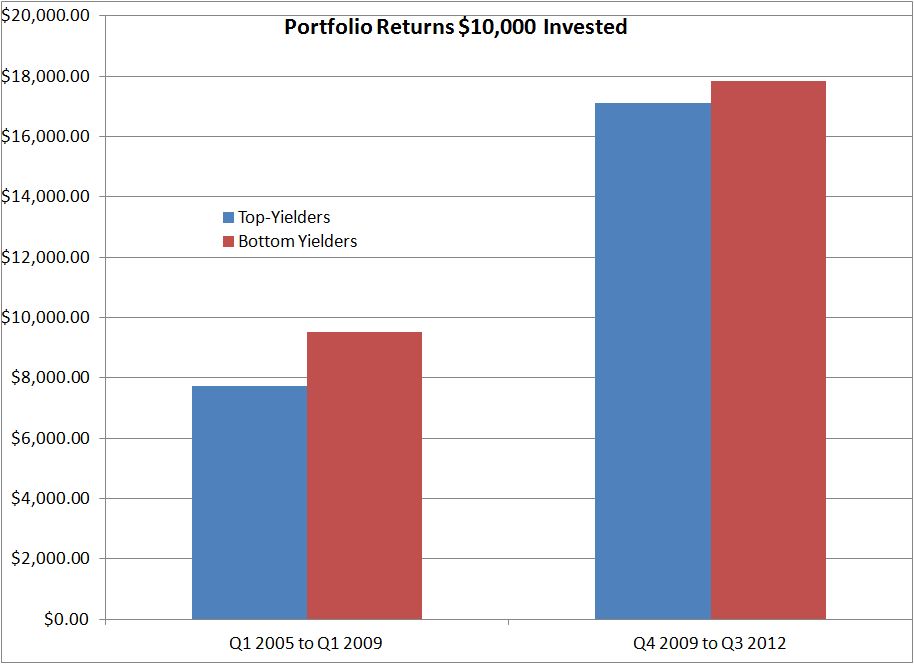 For one, the high-yielders’ outperformance comes from from the final three quarters of 2009–a highly abnormal period for the stock market.

You also have to question whether buying stocks that are on the brink of discontinuing their payouts is a valid strategy for income-seeking investors. Even if you had the foresight to scoop up shares of Atlas Pipeline Partners and other beaten-down fare in early 2009, how many investors targeting a safe return would have held these names through the breakneck volatility of 2008?

Survivorship bias also skews the results: The only MLPs included in our investable universe were those that made it through the Great Recession and plummeting commodity prices. However, some of the highest-yielding MLPs survive these trying times.

Consider the case of K-Sea Transportation Partners LP, a publicly traded partnership that owned a fleet of tanker barges used to transfer oil and refined products between coastal ports. The stock traded in the mid-$40s in 2007 and consistently ranked among the highest-yielding MLPs in my coverage universe.

That’s not to suggest that highest-yielding MLPs always make for a bad investment. We like a number of publicly traded partnerships whose units currently yield about 9 percent. A few worthwhile names even boast double-digit yields.

However, investors must understand that buying the highest-yielding names isn’t a low-risk way to build wealth; these stocks often entail significant exposure to commodity prices or are vulnerable to slowing economic growth.

In addition to focusing on the highest-yielding stocks, investors often make the mistake of ignoring names that have below-average yields but superior potential to grow their distributions. In fact, a growing payout is a much more important driver of total returns than a high yield.

Using the same investable universe of MLPs, I examined the total return generated by a strategy that involved sorting these 67 publicly traded partnerships by the consensus estimate of full-year distribution growth and buying the names that ranked in the top 20 percent based on this metric.

Unfortunately, reliable data on estimates of distribution growth isn’t available back to 2005; my study focused on early 2010 to the present. 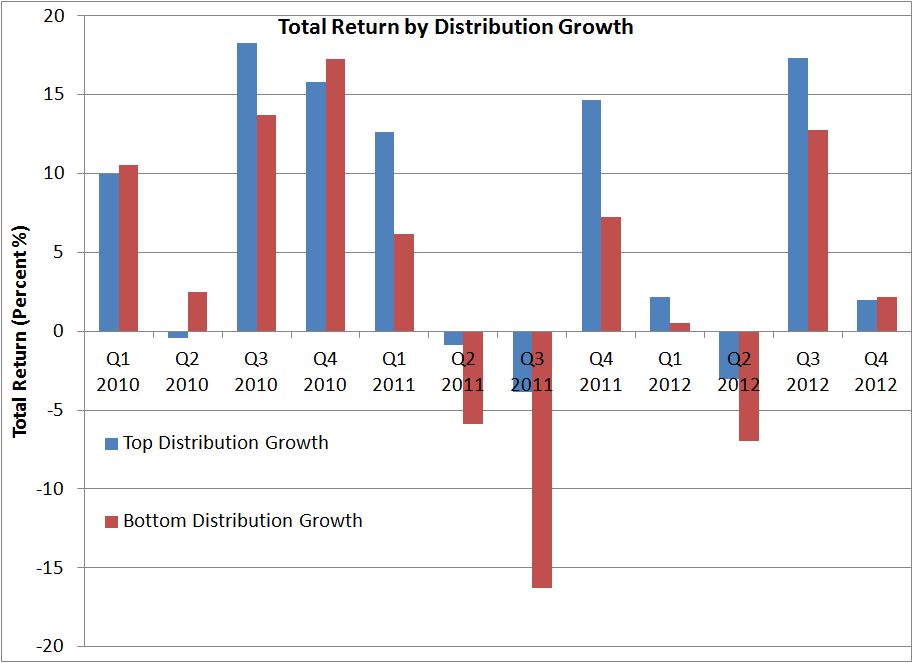 As you can see, the MLPs with the strongest expected distribution growth also outperformed in almost every quarter over this time frame, including quarters in which publicly traded partnerships lagged and ones in which the group generated superior returns.

An investor who followed this strategy would have generated a total return of roughly 119 percent, compared to the 72 percent gain posted by the Alerian MLP Index over this period.

Although distribution growth tends to drive total returns in both bull and bear markets, these names also usually offer lower distribution yields than their peers. 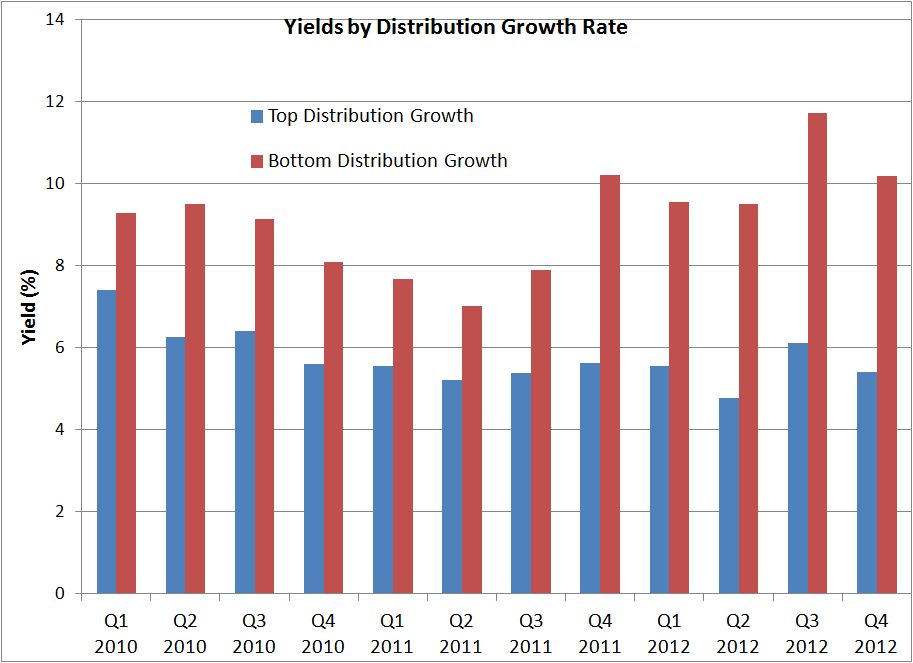 The top quartile of distribution growers currently yields less than 6 percent, while the slowest growers yield about 10 percent. In other words, yield-focused investors routinely ignore MLPs with the best potential for total returns.

To identify which names are most likely to grow their distributions, investors should look for partnerships with supportive general partners that have the scope and willingness to drop down assets into the MLP. These transactions often occur at prices that allow the MLP to boost its quarterly distribution to unitholders.

You should also be on the lookout for MLPs such as Linn Energy LLC (NSDQ: LINE) that stand to benefit from a favorable environment for acquisitions. We expect this upstream operator to grow its distribution at an average annual rate of about 10 percent in coming years, thanks to its acquisition of gas-producing properties at fire-sale prices that guarantee a solid rate of return in the near term and an even better return on investment in the long term.