Global LNG Market Stagnates in 2013, But Poised for Growth

When natural gas is cooled to minus 260 degrees Fahrenheit at a liquefaction facility, the fuel condenses to roughly 1/600th of its original volume, facilitating overseas transport in specially designed ships. Regasification terminals heat the liquefied natural gas (LNG) to restore the delivered volumes to a gaseous state before pipelines transmit the product to end users.

This network of LNG carriers and import and export terminals effectively releases natural gas from the geographical constraints of the pipeline network, enabling producers to deliver their output to overseas end markets.

LNG accounted for about 32 percent of the global trade in natural gas in 2012, compared to 26 percent in 2005. At the same time, LNG represents only 9.8 percent of global gas consumption, making it a niche market.

Surveying the Supply Side

The build-out of LNG import and export capacity has accelerated over the past decade, with global shipments increasing at an average annual rate of about 13 percent between 2001 and 2011. 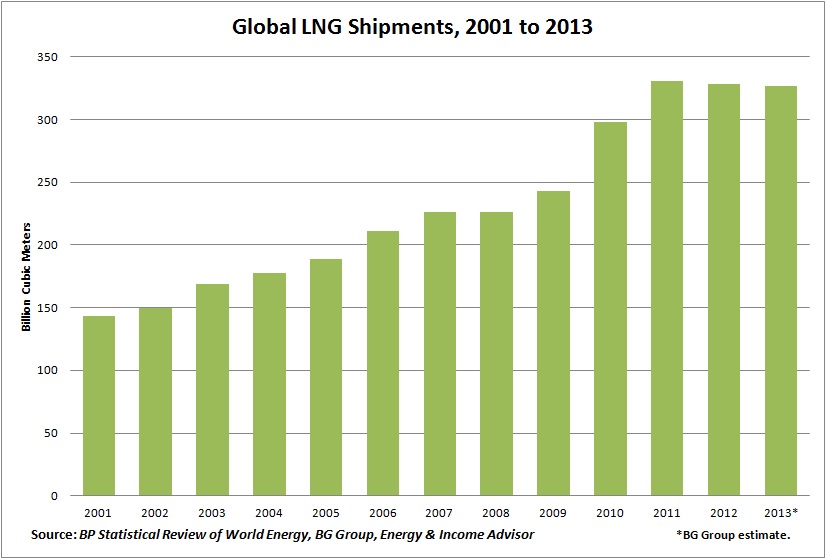 However, global LNG volumes have stagnated over the past two years, reflecting a lull in the completion of new liquefaction capacity.

Of the two export terminals slated to come onstream last year, only the long-delayed Angola LNG project commenced operations; in Algeria, the start-up of Sonatrach’s Skikda liquefaction train slid from 2013 to the end of January 2014.

Angola LNG, the US$10 billion facility operated by Chevron Corp (NYSE: CVX), sent out its first cargo in June and then five more over the next six months. But a deadly accident involving a pipe-laying rig left the terminal operating at 20 percent of its capacity in the fall. Management indicated that the operation would ramp up to its nameplate capacity by the end of 2014.

These limited capacity additions and higher utilization rates at certain facilities were offset by supply disruptions in Nigeria and waning production in Egypt, where an unstable political situation, reservoir issues and domestic demand curtailed exports by 44 percent. 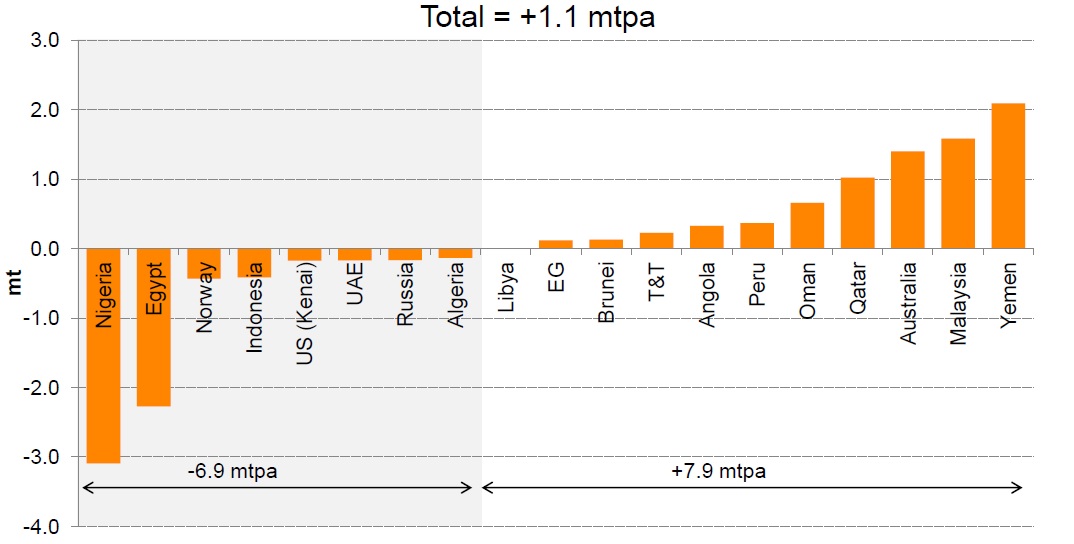 At the end of 2013, 17 exporting countries boasted 86 liquefaction trains with a total capacity of 286 million metric tons per annum (mmtpa).

And the pipeline of new projects remains robust, with 15 new export projects (102.6 mmtpa, or 35 percent of existing capacity) under construction at the start of 2014.

Australia accounts for about 60 percent of this forthcoming liquefaction capacity, a trend that reflects the resource-rich nation’s proximity to China and other key demand centers in Asia.