In the most recent installment of Energy Investing Weekly, we explained how regulatory mandates for blending ethanol volumes into gasoline have bolstered domestic demand for corn, prompting the US to allocate between 35 and 40 percent of its annual corn crop to this purpose.

And corn isn’t the only foodstuff that’s destined for our gas tanks. According to recent projections published by Iowa State University’s Agricultural Marketing Center, US farms will need to allocate as much as 15.7 percent of their soybean acres for biodiesel production, compared to about 4.5 percent during the 2009-10 harvest.

Although the US isn’t the only country to mandate biofuel production, converting such a large proportion of the world’s biggest corn crop into ethanol has global implications–particularly in a world where global meat consumption continues to expand at a rapid pace.

Feeding the world’s expanding population is complicated by the agricultural intensity of our growing appetite for meat; since 1960, consumption of beef, veal, pork, chicken and turkey has more quintupled to more than 250 million metric tons of carcass weight equivalent.

In fact, global protein consumption has increased at an average annual rate of 3.33 percent over the past 53 years–more than double the population growth rate over the same period. But population trends aren’t the primary driver of rising meat consumption; rather, this secular shift in diet has tracked improving living standards and the expansion of the middle class. Check out this graph that compares protein consumption to per capita gross domestic product (GDP) in a wide range of nations. 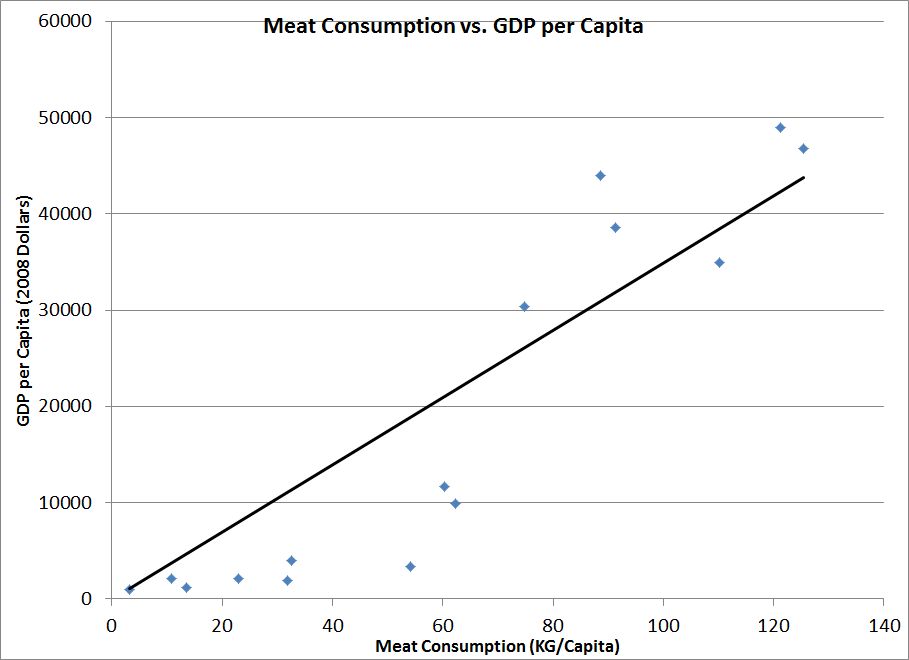 Nations with higher GDP per capita tend to consume more meat per person than countries at the opposite end of the spectrum. This wealth effect is most evident in China, where the rapid economic development of the past 15 years has fueled a corresponding boom in protein demand.