The US is the world’s leading corn producer by a wide margin. Despite a severe drought that afflicted much of the nation’s farm belt in 2012, the US still produced 10.725 billion bushels, equivalent to more than one-third of global production.

Corn has many applications, from feeding humans and animals to producing starch, high-fructose corn syrup and other food additives. But over the past decade, the US has converted an increasingly large portion of its annual corn crop into ethanol, a biofuel that’s blended with gasoline. 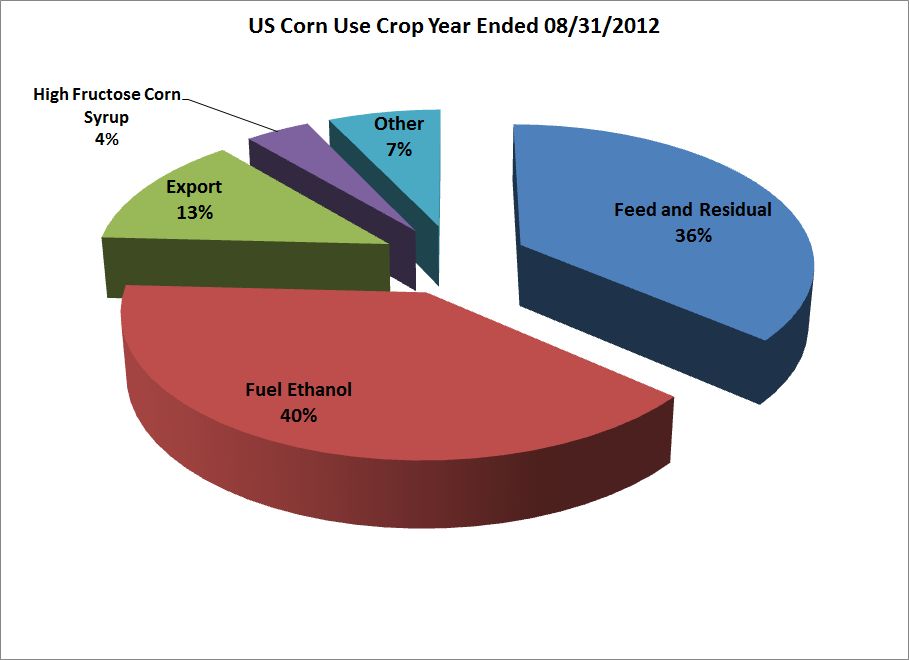 Soaring ethanol production reflects the government-mandated phasing out of methyl tertiary-butyl ether (MTBE), a gasoline additive that boosts octane ratings and reduces engine knocking and smog-causing emissions. This trend dates back to 2004, when rising concerns about MTBE contamination of groundwater supplies prompted California and New York to ban the additive from motor fuels. Three years later, 26 states had enacted restrictions on MTBE; refiners responded by phasing out the additive from the domestic fuel mix.

Widely available and cost-effective, ethanol entered the breach as an alternative that would provide a similar octane boost to MTBE without the risk of water contamination. Even after ethanol largely replaced MTBE as a gasoline additive, demand for the biofuel continued to skyrocket. 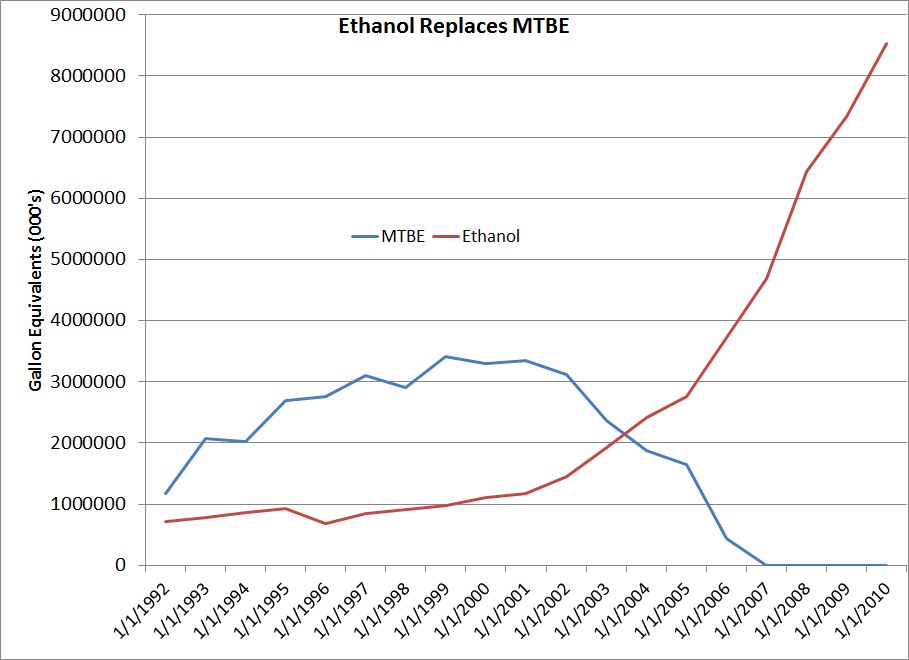 This upsurge in ethanol consumption stems from the Energy Policy Act of 2005, which required that gasoline contain 7.5 billion gallons of renewable fuel annually by 2012.

Each biofuel category is assigned a renewable identification number (RIN) when it’s produced or exported, enabling the government to track refiners’ compliance with the renewable-fuel standard. In addition, refiners that generate excess RINs may apply this overage to their activities in the next calendar year, providing leeway for annual variations in biofuel production.

When the renewable fuel standard was originally conceived, most projections called for a steady increase in US gasoline consumption. But domestic gasoline demand actually contracted in the wake of the 2007-09 financial crisis. 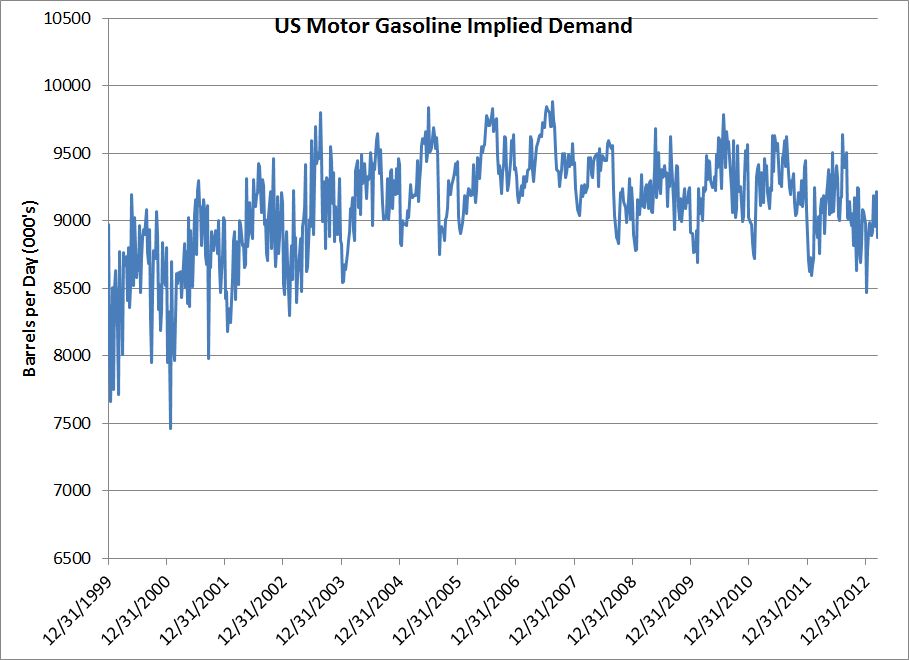 Refiners have demonstrated an understandable reluctance to move beyond the 10 percent threshold. After extensive testing, the US Environmental Protection Agency (EPA) in 2010 ruled that gasoline with an ethanol blend of 15 percent (E-15) is safe for cars built after 2001; older automobiles, which represent 30 percent of the vehicles on the road, are susceptible to engine damage when running E-15. The EPA has not approved this higher blend rate to fuel motorcycles, boats, off-road vehicles and small engines.

Major refiners worry that widespread production of motor fuels containing higher percentages of ethanol could expose them to expensive lawsuits from consumers whose vehicles were damaged by the fuel. 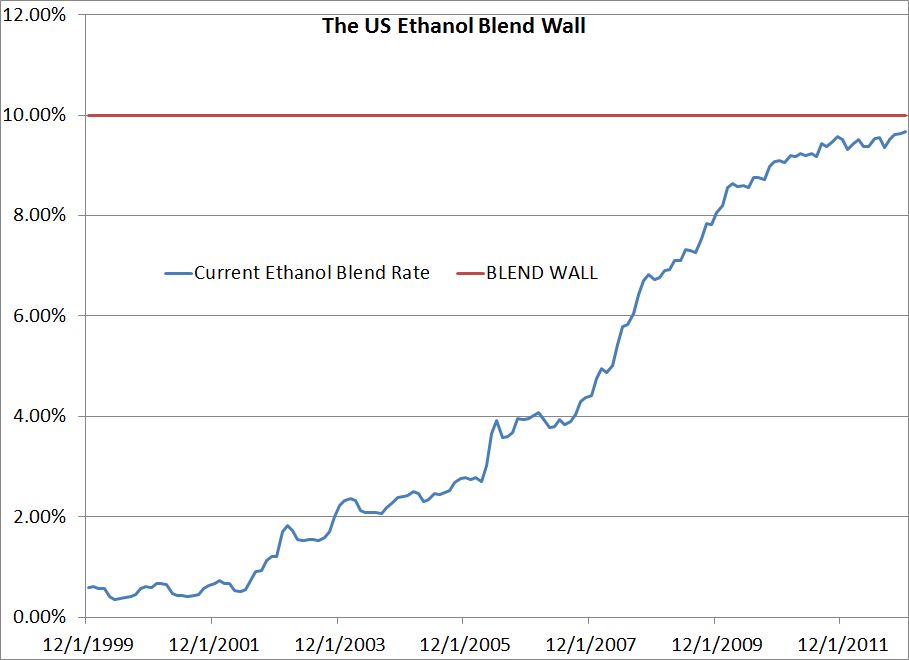 With ethanol consumption hovering near 10 percent of US gasoline supply, the blend wall looms large. To meet the renewable-fuel standard, US refiners have scrambled to purchase RINs banked during the prior year, driving up the price of these credits to a record of $0.70 per gallon from a low of $0.05 per gallon to $0.07 per gallon. 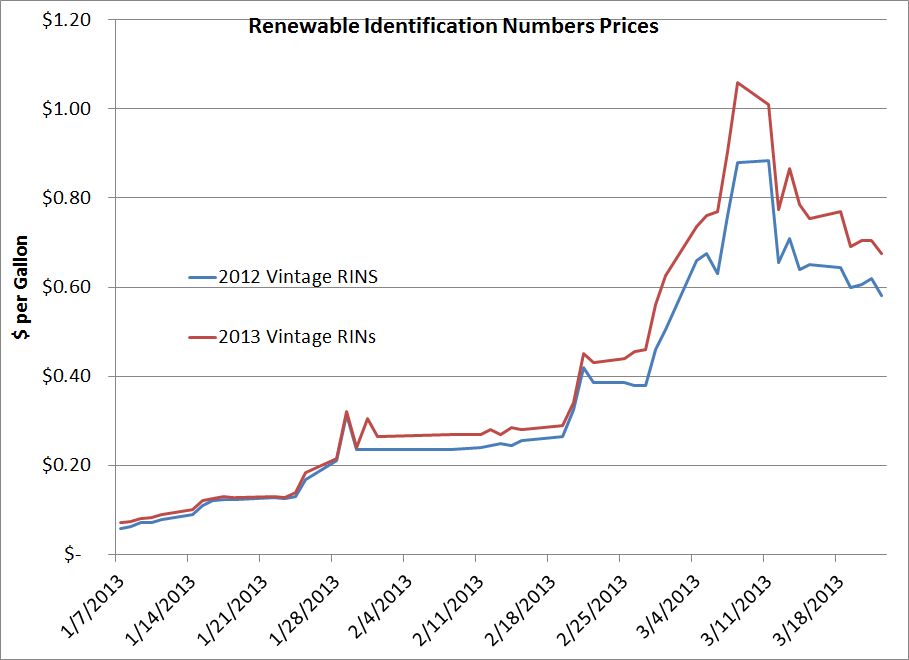 This unfortunate situation could lead to gasoline shortages if refiners choose to export gasoline rather than produce fuel blends in which the proportion of ethanol exceeds 10 percent. Several refiners also indicated that they would likely pass through these additional costs to consumers.

As it stands, the renewable-fuel standard poses other problems.

For one, the US didn’t produce commercial quantities of cellulosic ethanol–a fuel produced from switchgrass and other inedible plant matter–until the first plant came online in late 2012. Under the standards implemented by the EPA, refiners were expected to blend 8.65 million gallons of cellulosic ethanol into their gasoline output in 2012. This target ultimately proved impossible to meet: Last year, the US produced a little more than 20,000 gallons of the biofuel–all of which were exported to Brazil.

Something has to give. In January 2013, a US federal appeals court tossed out the EPA’s 2012 cellulosic ethanol mandate, asserting that the agency can’t require the use of fuels that don’t exist. The court summed up the message that the EPA’s standard for nonexistent fuel sends: “Do a good job, cellulosic fuel producers. If you fail, we’ll fine your customers.”

Congress is weighing several proposals that would adjust the renewable-fuel standard to realistic levels; any solution would likely include a measure preventing the EPA from mandating fuel blends that comprise more than 10 percent ethanol. The timing of such legislation remains uncertain, though the risk of running into the so-called blend wall in 2013 or 2014 should spur Congress into action.

Accordingly, investors should steer clear of ethanol or biofuel producers that rely on the US market. Much like solar power companies (a group we’ve shorted successfully in the past), cellulosic ethanol companies such as KiOR (NSDQ: KIOR) rely entirely on governmental fiat to create a market. Spain-based Abengoa (Madrid: ABR, OTC: ABGOY) is another name that investors should avoid.

Our bearish outlook for producers of cellulosic ethanol doesn’t mean that there aren’t opportunities for investors to profit from the biofuel industry. Although we don’t expect US refiners to push beyond the E-10 standard, we expect ethanol producers to consume more than one-third of the annual US corn crop for the foreseeable future.

Alongside last year’s drought in the US and surging demand for corn in China and other emerging markets, US ethanol consumption has driven up the price of corn to more than $8 per barrel in 2012 from about $2 per barrel in 2005.

And although US ethanol production is butting up against its practical limits, the global expansion of the biofuel industry continues apace. Long-term projections from the US Dept of Agriculture call for global biodiesel consumption to grow by roughly 30 percent over the next decade, driving demand for soybeans, palm oil and other key inputs. Mandates for biodiesel consumption in the US, EU and Brazil will support this upsurge.

Meanwhile, global ethanol production is expected to increase by 40 percent over the same period, with renewable-fuel standards in Brazil and other countries offsetting slowing US demand growth. This trend should tighten the supply-demand balance in the markets for corn and sugar.

These and other factors all support a continued boom in the global agricultural complex, from companies that produce seeds and fertilizer to manufacturers of agricultural machinery and firms that own farmland or water rights. The next issue of Energy and Income Advisor will examine our top plays on this powerful growth trend.