By Roger S. Conrad on May. 4, 2013
FREE PREVIEW
Subscribe to Read the Full Article

Western Canada Select (WTI), a heavy-sour crude-oil blend produced primarily in Alberta and delivered to Port Hardisty for export, traditionally has traded at a discount to West Texas Intermediate (WTI), the light-sweet varietal that trades primarily at the hub in Cushing, Okla., and underpins futures contracts traded on the New York Mercantile Exchange. Denser and more viscous than light crude oil, heavy varietals require additional processing to refine them into usable products such as gasoline and diesel.

The price spread between West Texas Intermediate crude oil (WTI) and Western Canada Select (WCS) has averaged USD16 per barrel since 2008. But in fall 2012 and early 2013, this differential widened considerably, peaking at USD42.50 per barrel on Dec. 14, 2012. 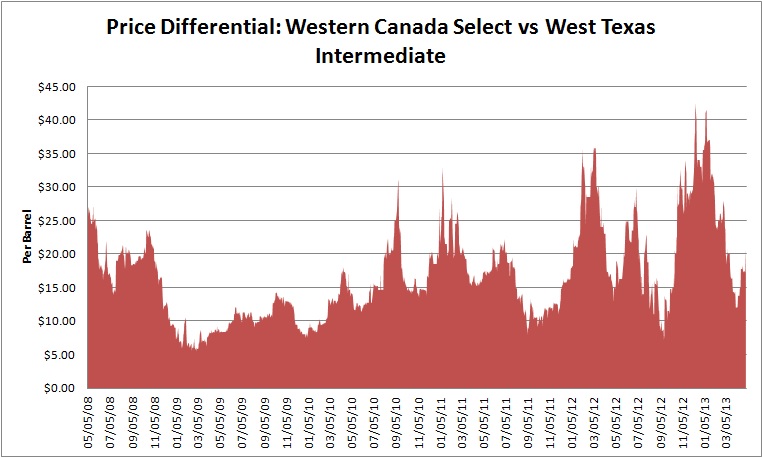 This anomaly reflected temporary midstream and downstream capacity outages, not a durable trend.

In late October and early November, TransCanada reduced throughput on its Keystone pipeline, which transports oil from western Canada to Illinois, to investigate whether the system had sprung a leak. Fellow midstream operator Enbridge (TSX: ENB, NYSE: ENB) likewise announced that an excess of demand had forced the firm to ration capacity on one of its pipelines that stretches from western Canada to the Midwest.

Meanwhile, BP (LSE: BP, NYSE: BP) curtailed operations at its refinery in Whiting, Ind., for maintenance and repairs prior to a planned expansion of the facility that will come onstream in mid-2013. Designed to process lower-quality grades of crude oil, this facility refines large volumes of imported WCS.

Pipeline bottlenecks and reduced throughput at Whiting will ensure that the differential between the price of WCS and WTI remains elevated in the near term. However, this spread should continue tighten in 2013, when BP’s upgraded Whiting facility comes onstream and Marathon Petroleum Corp (NYSE: MPC) completes an expansion to its refinery outside Detroit.

With downstream operators in the Midwest expected to expand their capacity to process heavy-sour crude significantly in the next few years, the price of WCS should recover from its swoon.

In the meantime, many Canadian oil producers posted disappointing fourth-quarter results because of depressed price realizations on their output. However, with the basis differentials improving, the handful of upstream operators that have reported first-quarter results sounded an encouraging note.