Eni is a Better Buy Than ExxonMobil Corp

There’s no disputing ExxonMobil Corp’s (NYSE: XOM) pedigree as a vehicle for building wealth. Shares of the energy giant have returned more than 200 percent over the past decade, outperforming the S&P 500 by a more than 2-to-1 margin.

ExxonMobil’s resilience through the 1990s, a period of weak oil and natural-gas prices, is particularly impressive: While most energy stocks lagged the market averages, the company’s shares generated a return of 16.5 percent–roughly in line with the S&P 500.

In addition to a solid dividend, ExxonMobil has also created value for shareholders by regularly repurchasing shares. Although the Super Oil’s hydrocarbon production has declined by about 7 percent over the past 15 years, stock buybacks have boosted energy output per share by a whopping 40 percent during this time frame. 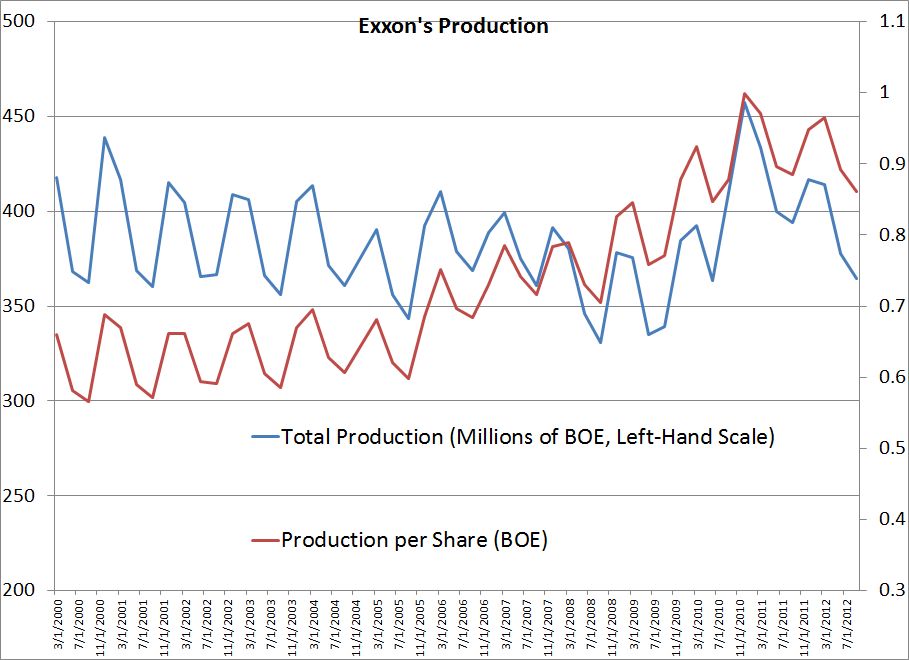 We regard shares of ExxonMobil as a foundational holding for investors seeking growth and income over the long term. But Focus List holding Eni (Milan: ENI, NYSE: E) offers a better value right now.

In the third quarter of 2012, ExxonMobil’s hydrocarbon production dropped 7.5 percent from year-ago levels, with liquids volumes slipping by 133,000 barrels per day and natural-gas output falling by 1.136 million cubic feet per day. Much of that decline stemmed from one-off factors, including hurricane-related disruptions in the US and maintenance work on international production facilities.

Regardless of the cause, ExxonMobil’s output has lagged its targeted production growth by about 1 percent thus far in 2012; odds are that the energy behemoth’s output will fall short of this goal, especially with the start-up of the massive Kearl oil-sands project delayed until the first quarter of 2013.

The longer-term outlook is more sanguine: ExxonMobil is pursuing a number of major oil and gas projects that should drive production growth in coming years.
Within North America, this opportunity set includes additional phases of the aforementioned Kearl project, the Hadrian and Lucius fields in the Gulf of Mexico and significant acreage positions in North Dakota’s oil-laden Bakken Shale and the emerging Duvernay Shale play in Alberta, Canada.

At the same time, ExxonMobil has aggressively curtailed output and drilling activity in North American plays that primarily produce natural gas, allocating about two-third of its actively drilling rigs in the region to basins that produce significant volumes of oil and natural gas liquids.

Major international growth projects include the natural-gas export terminal in Papua New Guinea and the massive Kashagan oil field in the Caspian Sea. All told, management expects these endeavors to add more than 1 million barrels of oil equivalent per day to ExxonMobil’s production base by 2016.

However, output from ExxonMobil’s asset base declines by about 3 percent annually, or about 120,000 barrels of oil equivalent per day; the majority of the company’s anticipated 200,000 barrels of oil equivalent per day in incremental production growth would merely offset lost output from maturing assets. Accordingly, management expects ExxonMobil to grow its total hydrocarbon output at an average annual rate of 1 percent to 2 percent through 2016.

Moreover, delays and cost overruns occur regularly on the large-scale multiyear developments that ExxonMobil must pursue to move the needle on production. For example, the company in November 2012 raised its cost estimate on an LNG (liquefied natural gas) project in Papua New Guinea to $3.3 billion.

With an enterprise value of USD125 billion and total production that’s not even half of ExxonMobil’s output, Eni has a much easier time growing its oil and gas volumes than the world’s largest integrated energy companies.

The Italian energy giant has several projects that are slated to come onstream over the next two years, as well as a string of recent oil and gas finds that should begin to add to its production base in 2015.

Eni has a 16.81 percent participating interest in the Kashagan field in the Caspian Sea offshore Kazakhstan, a play that’s widely considered one of the largest oil discoveries of the past three decades. Although this project has suffered a number of delays, the partners expect the field to flow first oil in March 2013 and production to reach 1.5 million barrels of oil per day by the end of the decade. The development of several satellite fields included in the production agreement could drive additional output gains.

In the US, Eni already produces more than 100,000 barrels of oil per day from the deepwater Gulf of Mexico and holds a 25 percent interest in the Hadrian field, a play that’s operated by ExxonMobil.

All told, Eni has more than 700,000 barrels of oil equivalent production slated to come online over the four-year period ending in 2015. Factoring in declines on the company’s legacy assets, this equates to average annual production growth of 3 percent to 4 percent–roughly twice that of ExxonMobil.

We also remain bullish on Eni’s promising exploratory prospects offshore east Africa, where the Italian energy giant leads the way in terms of net acreage and discovered resources. In particular, drilling in the Mamba Complex offshore Mozambique has yielded additional discoveries that have increased the company’s estimate of natural gas in place to about 68 trillion cubic feet from an initial 30 trillion cubic feet.

Eni is also pursuing a successful exploratory program in the Barents Sea offshore Norway and Russia. The Skrugard and Havis prospects, which were discovered over the past two years, are believed to contain 500 million barrels of oil equivalent. The Italian company owns a 30 percent stake in these fields, while Norway’s Statoil (Oslo: NYSE: STL, NYSE: STO) operated the development and holds a 50 percent interest.

Eni’s long-term exploration plans include opportunities offshore west and east Africa, as well as an agreement with Rosneft (Moscow: ROSN) to explore for oil and gas in the Barents Sea and the Black Sea. Through a memorandum of understanding with China National Petroleum Corp, Eni is also evaluating shale oil and gas blocks on the Chinese mainland.

These efforts have prompted management to forecast average annual production growth of about 3 percent between 2015 and 2022. We see the potential for additional upside, as Eni has exceeded its target of finding 1 billion barrels of oil equivalent worth of resources in each year.

Successful investing, particularly over the short to intermediate term, requires identifying potential catalysts that could change investors’ perceptions of a stock’s value. Eni’s ongoing business transformation could act as a powerful upside catalyst for the stock in 2013.

Specifically, Eni is in the process of selling off its noncore stake in Galp Energia (Lisbon: GALP), a Portugal’s largest integrated energy company and Snam (Milan: SRG), the company’s erstwhile gas and power division.

The company has sold some of its one-quarter equity stake in Galp Energia and recently issued EUR1.03 billion (USD1.35 billion) worth of bonds that are convertible into shares of the Portuguese energy company.

The firm also sold a 35 percent equity stake in Snam at the end of 2012 for EUR4.1 billion (USD5.4 billion) and is looking to divest its remaining 20 percent interest.

Eni has plowed the proceeds of these asset sales into debt reduction, lightening its debt load by almost USD20 billion and dropping its debt-to-equity ratio to less than 44 percent from almost 55 percent in mid-2012.

The divestment of Snam has also boosted Eni’s exposure to exploration and production, its most valuable business line, to almost 60 percent of capital employed from about 48 percent. We expect Eni’s renewed focus on exploration and production to boost the valuation of its American depositary receipt (ADR), particularly if the firm’s string of oil and gas discoveries continues.

Robust cash flow and less debt should enable Eni to continue to reward cash to investors via dividends and share buybacks. With a yield of more than 5.5 percent and the potential for a payout hike in the coming year, Eni’s ADR offers a superior current return to shares of ExxonMobil. We also expect Eni to favor dividend increases over stock repurchases–a preferable allocation of capital relative to ExxonMobil’s focus on buying back stock.

PIIGS is an acronym for Portugal, Italy, Ireland, Greece and Spain, the five Eurozone countries that have been at the center of Europe’s credit crisis over the past few years. In late 2011, the yields on 10-year sovereign bonds issued by Spain and Italy spiked to more than 7 percent, a level at which the eurozone’s third- and fourth-largest economies couldn’t continue to finance their debts.

At that time, speculation ran rampant that several nations could exit the eurozone and adopt their former national currencies, a scenario that would have destabilized global markets. Meanwhile, the combination of soaring borrowing costs across southern Europe and significant fiscal austerity pushed Europe into a nasty recession.

These concerns have depressed valuations of European equities relative to their US peers; shares of companies headquartered in the fiscally weak PIIGS traded at an even steeper discount.

Even after the stock’s recent run-up, Eni boasts an enterprise value that’s 2.2 times 2012 earnings before interest, taxes, depreciation and amortization (EBITDA), making the firm one of the cheapest integrated oil companies. Total’s (Paris: FP, NYSE: TOT) enterprise value, for example, is 3.2 times its 2012 EBITDA, while ExxonMobil fetches a multiple of 4.7 times. With the exception of Total, Eni also sports the highest dividend yield of the integrated oil companies listed in the graph below. 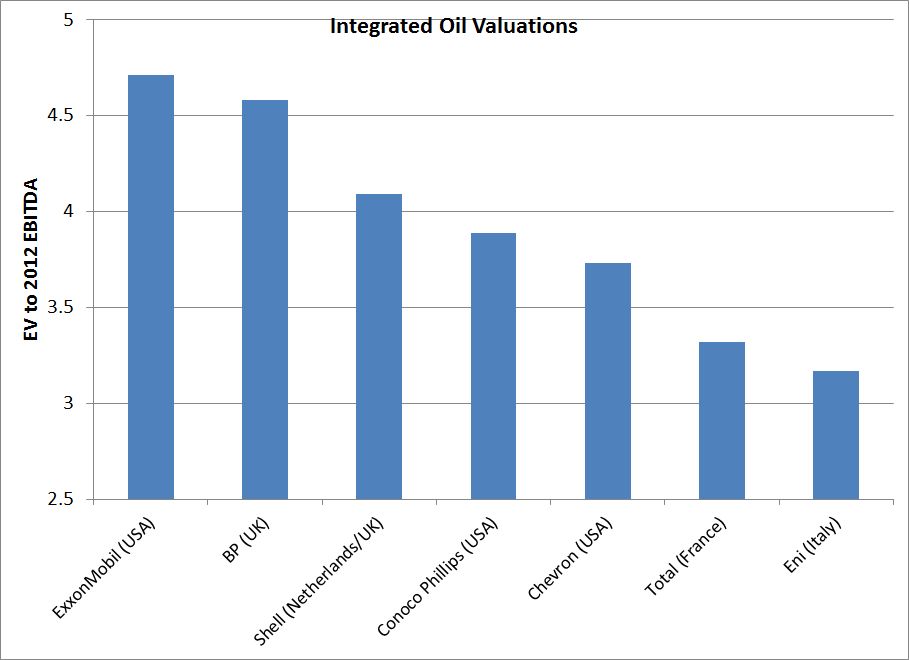 This discount is unwarranted. Although Eni is headquartered in Rome, the firm has limited exposure to economic conditions in Italy and Europe. More important, the majority of the firm’s oil production is sold in international markets at prices that track Brent crude oil, as opposed to West Texas Intermediate or another discounted varietal. Eni’s commodity-price realizations hinge primarily on growing demand in China and other emerging markets.

Eni has also reduced its exposure to Europe by divesting its EU-centered gas and power business and its interest in Galp Energia. Although the company still owns gas stations and refineries in Italy, these downstream operations make only a minor contribution to the firm’s net income.

Meanwhile, Europe’s economic outlook continues to improve, providing a welcome tailwind for shares of Eni and other Continental companies that investors have judged guilty by association. We expect the EU to exit recession in mid-2013 as the need for additional fiscal austerity diminishes and strengthening demand in Asia revivifies eurozone exports.

With superior production growth, multiple near-term catalysts, an elevated dividend yield and one of the cheapest valuations in its peer group, Eni’s ADR is a better buy than ExxonMobil for 2013.