By Elliott H. Gue on May. 27, 2014
FREE PREVIEW
Subscribe to Read the Full Article

The Zubair contract has weighed heavily on Weatherford International’s profit margins, prompting Duroc-Danner to reiterate that the firm won’t bid on any additional turnkey contracts for projects in southern Iraq.

Frustration with the company’s disappointing results, questionable strategic decisions and poor expectations management peaked in November 2012, when the stock sank to less than $9.00 per share.

We stuck with Weatherford International for one simple reason: For all of the firm’s issues, the company remains an industry leader in a few rapidly growing service categories.

And at that point, the potential upside catalysts outweighed the risks. Not only would the stock eventually gain support from putting its accounting issues in the rearview, but also its dirt-cheap evaluation could entice a larger services company to swoop in if management’s restructuring failed to pay off.

This calculated bet has paid off: Shares of Weatherford International have rallied by more than 116 percent since their low in November 2012, handily topping the 32 percent gain posted by the Philadelphia Oil Service Sector Index. 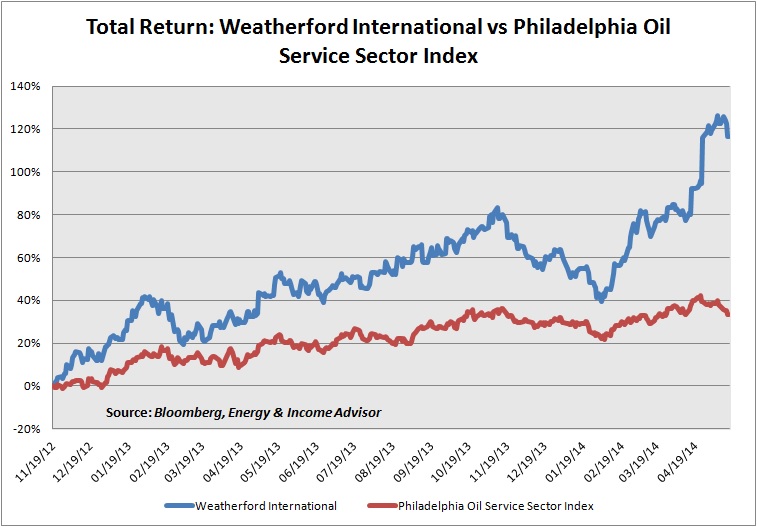 Although the resolution of Weatherford International’s accounting issues and alleged FCPA violations gave the stock a boost, the company’s newfound strategic focus bodes well for the future and could go a long way toward restoring management’s credibility with investors.

During the company’s first-quarter earnings call, CEO Bernard Duroc-Danner asserted that the company has shifted its focus from winning business at any cost to focusing on work that carries a solid profit margin:

And so I would put forth to you that your point is absolutely correct and we are moderating our views of what we should be striving to get done. You don’t hear us talk about 20 percent per annum and that sort of stuff anymore. We are much more reasonable.

As part of this strategic shift, Weatherford International will divest underperforming business lines and refocus on its core product and service categories, as well as its costs and ability to generate free cash flow.