Some wags have described the recent rally as a stock-picker’s market–pick a stock, any stock, and it will go up.

This one-liner applies especially to dividend-paying equities. With the Federal Reserve keeping the benchmark interest rate near zero, investors have piled into master limited partnerships (MLP) and other fare that offers above-average yields. The outperformance of income-oriented security classes over the past three years is striking. 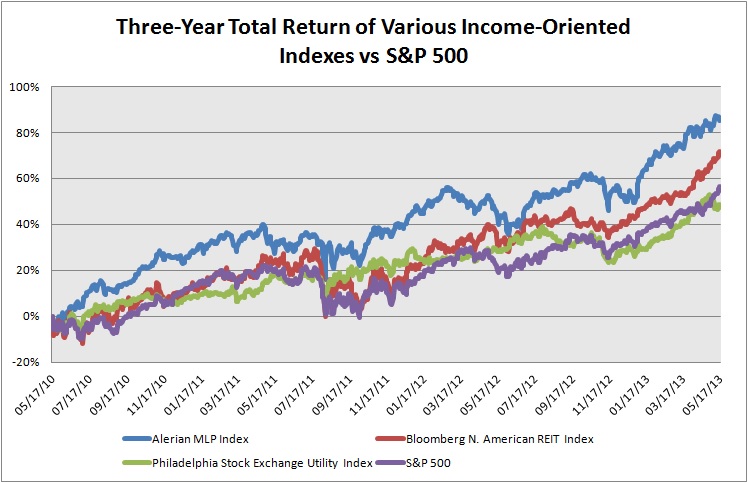 However, investors need to be wary of blindly buying only the highest-yielding names without considering the underlying risks. This shortsighted behavior is particularly prevalent in the MLP space, where retail investors tend to gravitate toward stocks with the highest yields.

Consider the case of Navios Maritime Partners LP (NYSE: NMM), an MLP that owns a fleet of 25 dry-bulk carriers and sports a distribution yield of almost 12 percent–the fourth highest of any publicly traded partnership.

Units of the shipowner have rallied almost 30 percent thus far in 2013, prompting several readers to ask whether this upside momentum presages a durable recovery in the market for dry-bulk carriers, seaborne vessels that transport non-liquid cargo such as coal, grains and other commodities.

At this point in the cycle, the challenges facing Navios Maritime Partners and other shipowners are well understood. With demand for shipping capacity booming in the mid-2000s, established and marginal operators ordered new vessels aggressively to take advantage of lucrative day-rates.

This lack of discipline, fueled by easy access to credit and the naive assumption that unsustainable demand growth would continue indefinitely, has saddled dry-bulk shippers with a crippling oversupply of vessels and elevated break-even rates. 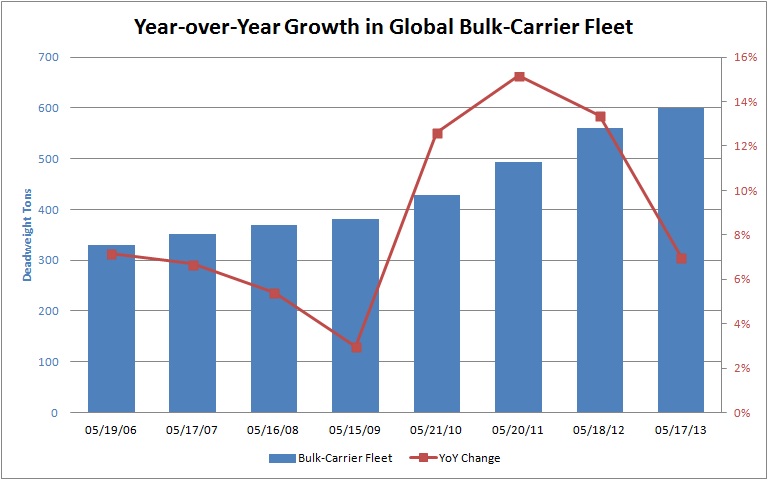 The bulk-carrier fleet grew at a double-digit rate in each of the past three years–a rate of expansion that dramatically exceeded annual growth in global trade. This oversupply of dry-bulk carriers has weighed heavily on the daily rates that customers pay to charter these vessels. 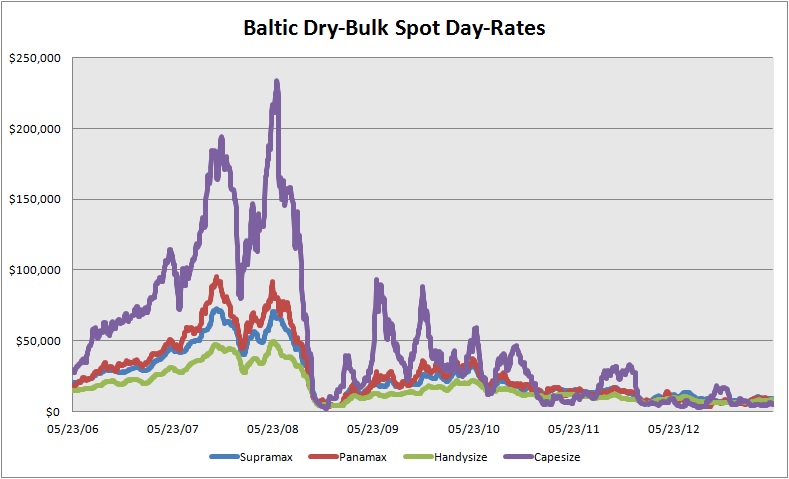 This downward pressure has continued into 2013: Day-rates for Supramax ships in the spot market have tumbled 23 percent from year-ago levels; rates garnered by Panamax vessels have dropped by 26 percent; rates earned by Handysize ships have slipped 14 percent; and rates for Capesize vessels have plummeted by 41 percent.

In this challenging environment, Navios Maritime Partners’ emphasis on securing long-term fixtures for its fleet of dry-bulk vessels has insulated its cash flow from the vagaries of the spot market and enabled the company to grow its quarterly distribution by 2.78 percent over the past three years.

However, impending contract expirations represent a real risk to the marine-transport MLP’s payout in coming years.

Although management has repeatedly reaffirmed Navios Maritime Partners’ commitment to maintaining its distribution in 2013, the percentage of its vessels’ available days that are covered by time charters will decline to 40.5 percent in 2014 from 84.8 percent in 2013. The shipowner inked these contracts at a time when prevailing day-rates were considerably higher than those available in today’s spot market; any replacement contracts would entail a significant decrease in cash available for distribution.

This challenge could be alleviate by an improvement in the supply-demand balance in this segment of the shipping market. What are the prospects for a recovery in day-rates? Industry participants continue to make slow-but-steady progress toward correcting the persistent supply overhang in the market for dry-bulk carriers.

For one, the influx of new vessels that has driven this overcapacity has diminished, with the book of outstanding orders declining to about 16.5 percent of the existing fleet. The majority of these new ships will join the fleet this year. 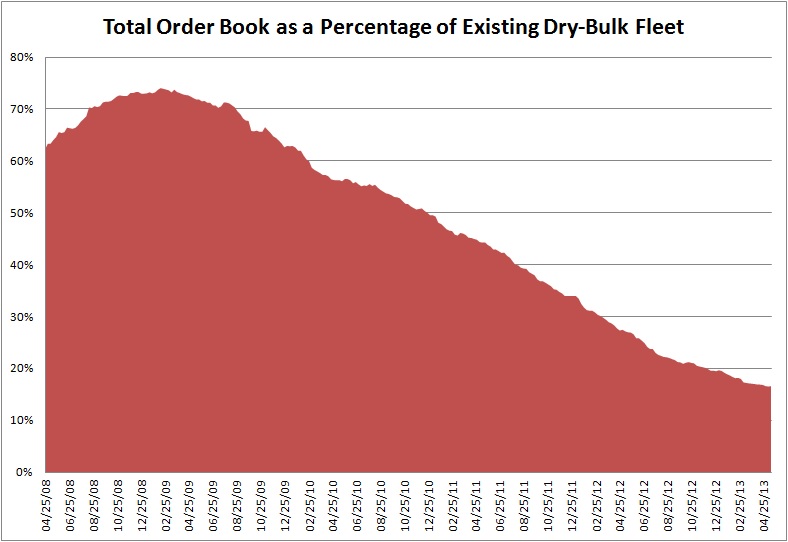 More important, shipowners have accelerated the scrapping of older vessels in an effort to restore the market to equilibrium while improving fleet efficiency and reducing operating costs. 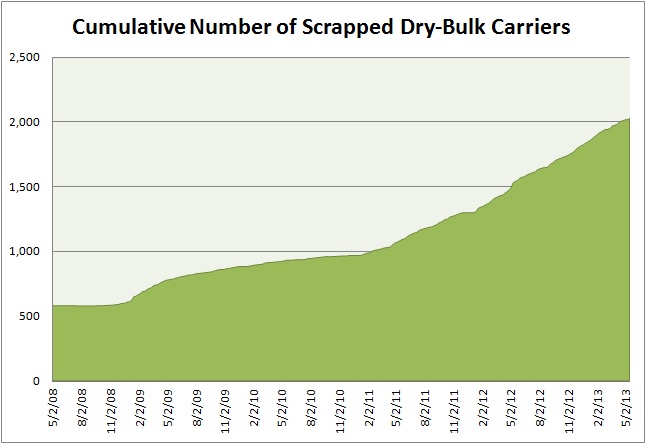 In 2012 industry participants scrapped 33 million deadweight tons’ worth of dry-bulk carriers, the majority of which were older less-efficient vessels. Shipowners have maintained this torrid pace in 2013, dismantling about 8.7 million deadweight tons through mid-April. Twelve of these scrapped ships were more than 20 years old, while four had been on the seas for less than a decade.

With 12 percent (about 81 million deadweight tons) of the global fleet greater than 20 years old, we expect ship disposals to continue apace in 2013 and 2014.

Bottom line: Although the market for dry-bulk carriers appears close to a bottom, the timing of a significant turnaround remains a few years away; despite a record number of scrapped vessels, day-rates have remained weak. Against this backdrop, a distribution cut appears inevitable for Navios Maritime Partners.

The extent to which Navios Maritime Partners slashes its payout hinges in part on the MLP’s acquisition strategy, as management will likely roll over expiring long-term contracts into shorter-term agreements that preserve exposure to an eventual recovery in day-rates.

Thus far, the company has focused on building for the future, acquiring bargain-priced vessels from distressed sellers.

Navios Maritime Partners earlier this year acquired three dry-bulk carriers, two of which operate under short-term contracts at prevailing day-rates and one of which has seven years remaining on a favorably priced fixture. More recently, the MLP took advantage of the yen’s devaluation to acquire four Japanese-built vessels for total consideration of USD108 million: two vessels constructed in the mid-2000s and newly built Capesize and Ultra-Handymax ships. All these vessels are slated for deliver in the fourth quarter of 2013 or the first quarter of 2014.

In short, Navios Maritime Partners isn’t suitable for investors seeking a reliable income stream; the stock is more appropriate for deep-value hunters looking to bet on an eventual recovery in the market for dry-bulk carriers. Navios Maritime Partners will be a survivor in this hard-hit industry, but we prefer to focus on names with superior potential to grow their quarterly payouts.