Editor’s Note: Roger Conrad and Elliott Gue will share their expertise with investors at the upcoming MoneyShow San Francisco, which will take place Aug. 21 to Aug. 23 at the Hilton Union Square. Roger will give five presentations on his favorite themes for income investors. Registration for this must-attend conference is free. Sign up at MoneyShow.com or call 1-800-970-4355 and tell them that Roger Conrad and Elliott Gue sent you.

The US Energy Information Administration (EIA) hosted its annual conference over the past two days in Washington, DC, and Elliott H. Gue and I were there to take in the proceedings.

This year’s event featured presentations that touched on all aspects of the energy sector, from oil and gas production to refining and power generation, and focused on critical issues that will shape investors’ returns over the coming years.

Whereas most of the journalists left to file their stories after House Energy and Commerce Committee Chairman Fred Upton (R-Mich.) delivered his speech, we stuck around for the main show–and came away with some solid investment ideas.

We outlined our key takeaways and stock picks in a members-only Video Report for Conrad’s Utility Investor.

If you haven’t subscribed yet, you’re missing out on my latest assessments of more than 200 essential-services companies and the 24 percent return delivered by my Aggressive Income Portfolio holdings since the publication launched last August.

We went into the EIA’s annual gathering with a clear goal: Identifying investment opportunities that the conventional wisdom may have overlooked.

Over the two-day conference, we gleaned loads of useful information from the presentations delivered by the EIA’s researchers, analysts and statisticians.

Other illuminating speakers included representatives from the California Public Utilities Commission and PJM Interconnections, a regional transmission organization that coordinates the movement of wholesale electricity in Maryland and a handful of states.

On the oil and gas side, Schlumberger’s (NYSE: SLB) Robert Kleinberg delivered a fantastic presentation on the challenges and opportunities oil-field services companies face to boost ultimate recovery rates in the nation’s shale oil and gas plays.

Topics of interest to utility investors included the implications of negligible growth in US electricity demand and whether renewable energy still requires supportive government policies to succeed (it does).

But the most valuable investment information wasn’t in the panel titles; our most important takeaways came from the assumptions and facts underpinning the forecasts bandied about at the conference.

Many investors dismiss coal-related investments out of hand because of low natural-gas prices and efforts to curb carbon dioxide (CO2) emissions.

A decade ago, US utilities planned to build more than 100 coal-fired power plants. Not only have power companies junked almost all of these projects, but the industry has also shut down a slew of older coal-burning facilities.

Last winter’s polar vortex and consequent spike in natural-gas prices halted King Coal’s decline temporarily, with this fuel accounting for 42.5 percent of the generation mix in the first quarter of 2014.

But power companies’ coal consumption has moderated with the advent of summer.

Meanwhile, the triple threat of renewable energy, low natural-gas prices and efforts to curb CO2 emissions has convinced many investors that King Coal’s reign is winding down.

King Coal’s demise, however, has been greatly exaggerated.

In the EIA’s “Reference Case” for power generation, for example, coal still accounts for 37.9 percent of the US power supply in 2040.

This outlook assumes that residential power demand grows by 21 percent, while commercial usage climbs by 27 percent and industrial consumption increases by 30 percent.

All told, this forecast calls for electricity demand to grow at an average annual rate of 0.9 percent through 2040–equivalent to 37.5 percent of the projected 2.4 percent growth rate in US gross domestic product.

These conservative projections represent a marked decline in US energy intensity compared to past decades. 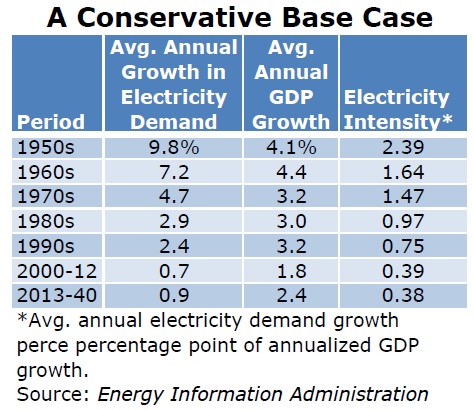 The EIA’s forecast for muted growth in electricity demand assumes an ongoing push for energy efficiency and households reducing consumption in response to an anticipated increase in electricity prices.

Structural changes in the US economy–rising income inequality, Baby Boomers exiting the workforce and the rise of Millennials as an economic force–will also contribute to these trends.

In other words, if the conditions that have depressed demand for electricity over the past five years persist, King Coal will still reign supreme in America’s generation mix over the next 25 years.

This prediction also holds true in the EIA’s “Low Growth” scenario, which includes electricity demand that’s 17 percent below its Reference Case and aggressive assumptions for the retirement of coal-fired power plants.

Factors driving the differences between these two outlooks include aggressive adoption of efficient technologies that aren’t necessarily economic today, as well as vast reductions in the cost of renewable energy and the extension of current tax breaks.

The Low Growth scenario also assumes a 6 percent decline in residential electricity usage from 2012 levels, but does not take into account the potential for higher natural-gas prices stemming from US exports of liquefied natural gas.

Although the EIA’s Low Growth model includes a significant decline in coal-fired generation capacity, US utilities will still rely heavily on this fuel in 2040.

Will coal-fired generation be profitable? Cost estimates vary widely. One key variable is the ultimate shape of the CO2 emissions standards adopted by the US Environmental Protection Agency (EPA), and whether these rules emerge intact from political tests over the ensuing years.

We discussed the agency’s recent proposed rules in EPA’s Crackdown on CO2 Emissions: An Indecent Proposal?

If the EPA were to dial back these emissions standards, the economics of coal-fired power generation would improve measurably. That’s a near certainty if Republicans recapture the White House in 2016. And it will be hard for EPA to be aggressive if the Democrats sustain heavy losses in the November 2014 election.

Ironically, coal-fired power may get its greatest lift if EPA standards on CO2 emissions survive in some form; growing use of this greenhouse gas to increase yields from mature oil wells–and its potential for boosting recovery rates in shale oil plays could expand and extend the US oil boom.

The equipment will capture 90 percent of CO2 from processed flue gas, or approximately 1.6 million tons annually. As part of a 50-50 joint venture with JX Nippon Oil & Gas Exploration, NRG Energy will ship the CO2 through an 82-mile pipeline to the West Ranch Oil Field, which is estimated to contain 60 million barrels of oil that’s recoverable through CO2 injection.

The add-on will apply to 240 MW of the plant’s capacity and should be operational by the end of 2016. A $167 million grant from the US Dept of Energy will help to mitigate the financial risk associated with this $1 billion project.

NRG Energy benefits from this project in three ways:

Southern Company (NYSE: SO) should enjoy similar benefits, when it brings its Kemper integrated gasification combined cycle plant on stream next year. The coal-fired power plant will sequester CO2 for sale to producers in nearby oil fields.

Kemper has busted its budget and repeatedly missed construction deadlines, forcing Southern Company to write off a sizeable chunk of the estimated $5 billion cost.

However, the utility last week issued a progress report noting that the plant successfully completed testing of the combined-cycle unit and gasifiers–a major milestone toward opening the 582-MW facility in 2015 and meeting current cost projections.

Southern Company also has a lot to gain if NRG Energy retrofit of carbon-capture technology proves pans out.

For example, the utility operates two coal-burning plants in Mississippi with a total capacity of 2,500 MW. That’s a lot of CO2 that could be injected into oil wells.

In the second quarter, this segment grew its crude-oil output by 6 percent year over year and increased production of the CO2 feeding these fields to record levels.

The segment’s operating earnings ticked up by 3 percent, with growth constrained by weaker oil price realizations at the hub in Midland, Texas.

Nevertheless, management reiterated its full-year guidance for an 8 percent uptick in operating earnings, fueled by rising demand for CO2 in mature US oil fields.

Surging output from these unconventional plays has forced the EIA to raise its targets for US production targets higher four years in a row. And the upper and lower limits of projected output through 2040 are wider than ever–primarily because of uncertainty about how much tight oil will come out of the ground.

As Schlumberger’s Robert Kleinberg noted during his presentation at EIA conference, technology and geologic knowledge for exploiting conventional oil supplies evolved over 140 years. Tight oil, however, still has a very steep learning curve.

At this juncture, the oil and gas industry continues to hone primary production techniques in North America’s shale plays.

A lack of buoyancy in these tight reservoir rock means that pressure-maintenance techniques that work in conventional plays aren’t effective. Water-flooding likewise doesn’t work because of a lack of permeability in these formations. The economics of steam injection also don’t make sense for shale plays.

Although a second round of hydraulic fracturing may make sense in earlier wells–completion techniques have evolved considerably–this approach doesn’t necessarily boost production enough to justify the expense and use of water.

Applying CO2 to this challenge has been constrained by tight supplies and high costs–impediments that could be overcome if more utilities sequester CO2 emissions from their coal-fired power plants.

Any improvement in recovery rates would reduce producers’ break-even costs and could drive US output growth through 2040; the EIA’s reference case calls for US oil production to peak early in the next decade.

Imagine a future where US coal-fired power plants continue to generate reliable baseload power, while CO2 collected during their operation fuels the shale oil boom. Extending King Coal’s reign helps to shield the economy from a potential increase in natural-gas prices once exports and domestic demand ramp up.

Sound far-fetched? Maybe. But the inconvenient truth about forecasts in the energy patch is that they can change dramatically over time. And the conventional wisdom that US electricity use will continue to drop, coal is in a terminal decline and renewable energy is a can’t-miss proposition is based on assumptions that could melt away.

Our approach to investing in the energy patch focuses on what’s happening on the ground. We wouldn’t count out King Coal just yet.