Sir Richard Branson, the British entrepreneur who founded Virgin Atlantic and Virgin America airlines, once quipped that the easiest way to become a millionaire is to go into the airline business as a billionaire. History suggests Branson has a point: In 2002 alone, US air carriers lost more money than they earned in cumulative profits since deregulation in 1978.

Remember PanAm, TWA, Eastern Airlines, People Express and Independence Air? These are just a handful of the major air carriers that went belly-up after deregulation. Even many of the dominant legacy carriers that still operate today have been through the bankruptcy and reorganization process at least once. 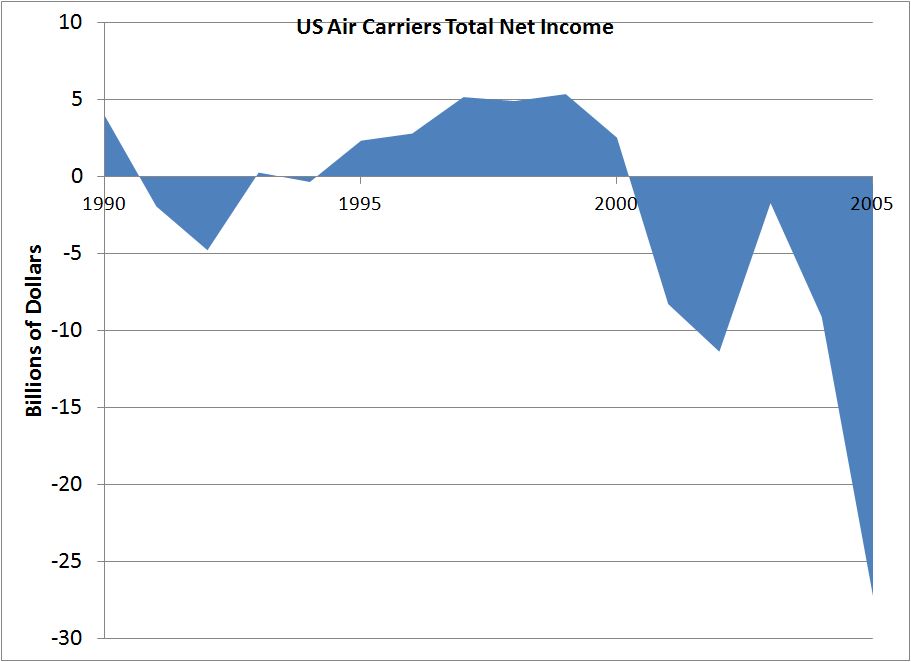 The challenges facing the airline industry are daunting. Fuel accounts for about one-third of the average carrier’s costs; the steady increase in jet fuel prices has crimped profitability over the past decade. In 2000 jet fuel cost $0.70 to $0.85 per gallon, compared to more $3 per gallon at the end of 2012. Meanwhile, maintaining profitability amid volatile fuel prices requires carriers to balance hedging activities in the derivatives market with unpopular fare adjustments.

A heavily unionized workforce has also led to frequent labor disputes and protracted wage negotiations. Many carriers have used the bankruptcy process to break labor contracts and reduce their cost structure to be more competitive.

Debt is also a major headwind for the industry: Excluding the bankrupt parent of American Airlines, the eight largest US carriers have an average debt-to-equity ratio of more than 225 percent. Not only do these elevated debt levels saddle US airlines with sky-high interest costs, but this burden can also make it difficult for carriers to upgrade their aging fleets and fund other much-needed expenditures.

But the root of the industry’s prolonged weakness is simple: massive overcapacity in the post-deregulation era. In 1978 the government stopped dictating prices and routes, a move that led to intense competition among the major airlines. But without artificial fare support and regulation, there were too many planes, too many carriers and too many flights. This cutthroat environment engendered internecine fare wars that sought to attract customers but decimated the industry’s profit margins.

Against this backdrop, investors are justifiably wary of airline stocks. But a checkered past doesn’t foreclose the chance of a bright future: Modern financial history is littered with industries that have languished for years only to restructure and generate impressive returns for investors.