Based on past performance, airline stocks deserve their reputation as terrible investments.

The US airline industry lost more money in 2002 than it made in cumulative profits since deregulation in 1978.

However, investors shouldn’t overlook fundamental changes in the airline industry that have transformed these perennial losers into big winners.

Last year, we neglected to add Delta Air Lines to our Focus List after highlighting the company’s improving prospects in Cleared for Takeoff. This oversight turned out to be one of our biggest mistakes: The stock has soared by 116 percent since the article appeared, blowing out the 25.8 percent return posted by the S&P 500 and the 46.9 percent gain recorded by the New York Stock Exchange ARCA Airline Index.

Nevertheless, we foresee additional upside for shares of our favorite US air carriers. The New York Stock Exchange ARCA Airlines Index trades at about 10 times forward earnings estimates; this multiple could expand to between 13 and 15 times 2014 consensus earnings expectations, thanks to improving profitability, rising dividends and a wave of stock buybacks.

US oil production has surged from about 5 million barrels per day in 2008 to almost 8 million barrels per day by the end of 2013. This domestic energy boom means that Gulf Coast refiners no longer need to import light-sweet crude oil, while the nation’s overall reliance on foreign energy should continue to decline as producers accelerate their drilling activity.

These favorable market dislocations should persist, thanks to regulations that prohibit the export of US-produced crude oil without a special permit from the Dept of Commerce. And even if the government does permit exports of light-sweet crude oil the government will likely take a gradualist approach, as opposed to opening the floodgates. (See The Push for US Crude Oil Exports.) 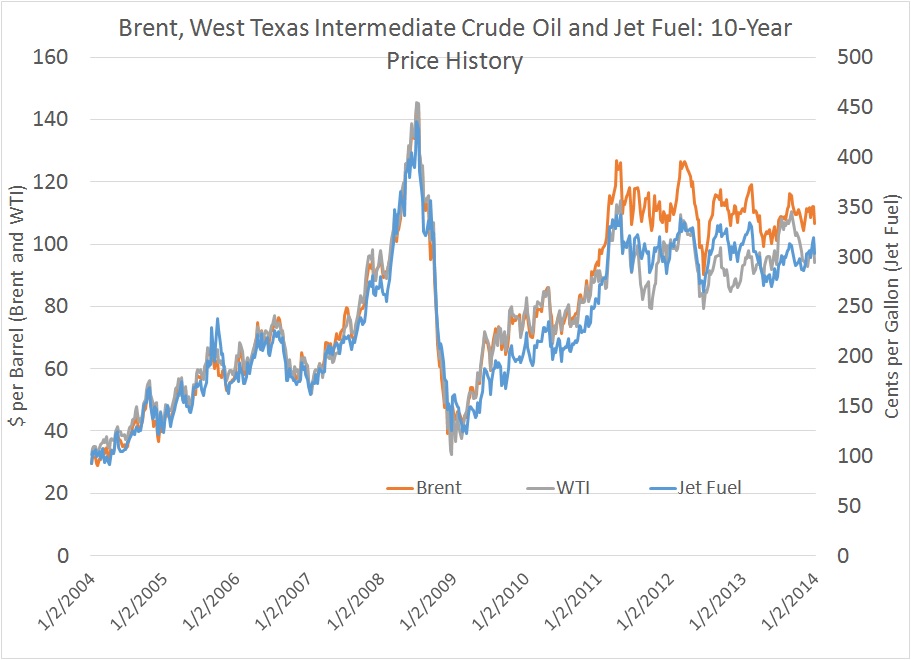 Between the end of 2003 and mid-2008, US jet fuel prices climbed to more than $4.00 per gallon from about $0.93 per gallon–a major headwind for an airline industry that still reeled from the 2001 recession and declining passenger volumes after the Sept. 11 terrorist attacks.

The recent decline in the price of jet fuel continues to give domestic air carriers’ profitability a big boost. United Continental Holdings, for example, saves about $800 million annually from a $0.20 per gallon decline in fuel costs.