Approvals for New Wells Surge in the Deepwater Gulf of Mexico 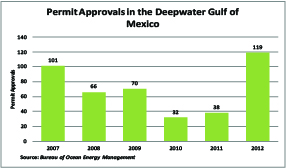 The shale oil and gas revolution has deservedly garnered a great deal of attention from investors and the mainstream media. After all, the rapid development of unconventional basins such as the Bakken Shale in North Dakota, the Eagle Ford Shale in south Texas and the Marcellus Shale in Pennsylvania enabled the US to grow its oil output for the first time in decades and overtake Russia as the world’s leading producer of natural gas.

However, many investors have overlooked the recent resurgence in drilling activity in the deepwater Gulf of Mexico. 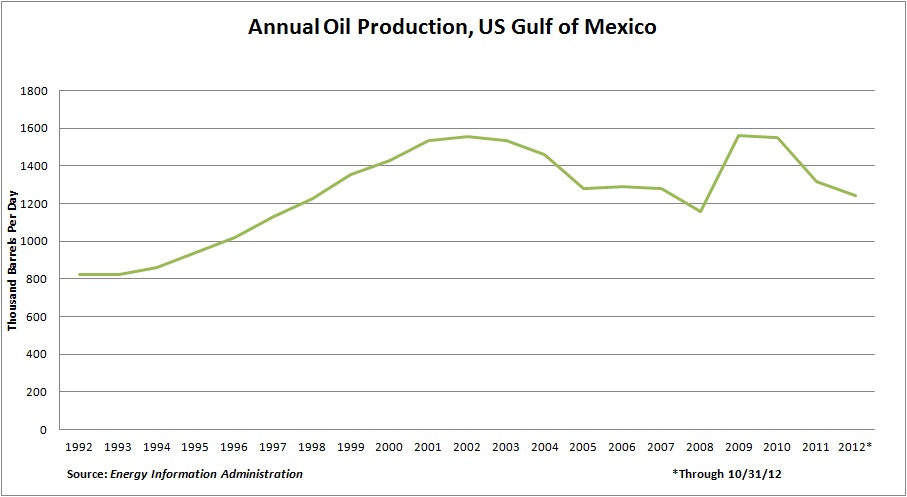 This drop in oil output from the Gulf of Mexico reflects two factors: the natural decline rate of fields in the region and the lingering aftereffects of the government’s moratorium on deepwater drilling in the wake of the Macondo blowout.

Although drilling in the Gulf of Mexico Outer Continental Shelf resumed when the government lifted the drilling ban in October 2010, the permitting process slowed to a crawl.

But the number of approvals for new exploratory and developmental wells in deep water (defined by regulators as depths greater than 1,000 feet) has finally recovered to levels that prevailed prior to the 2010 oil spill and 2008-09 financial crisis. 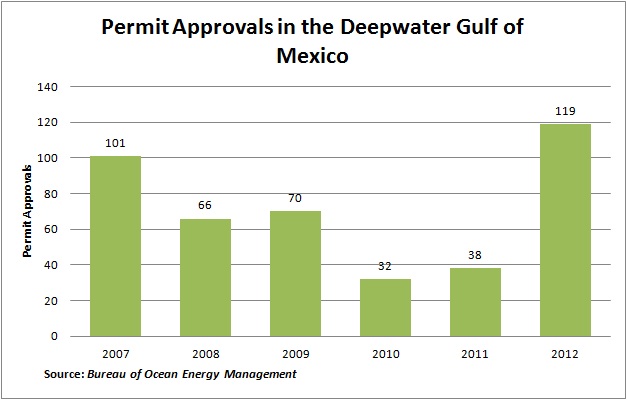 In 2012 the Bureau of Safety and Environmental Enforcement (BSEE) issued 119 permits for new deepwater wells, compared to the 101 applications approved by its predecessor, the Bureau of Ocean Energy Management, Regulation and Enforcement (BOEMRE) in 2007. Two years ago, the BSEE and BOEMRE granted only 38 deepwater permits.

As my colleague Elliott Gue noted in a must-read Alert on Schlumberger’s (NYSE: SLB) fourth-quarter results and their implications for other names in our Coverage Universe, surging activity in the Gulf of Mexico was a boon for the oil-field services giant. Whereas Schlumberger’s North American operations enjoyed a 24 percent jump in sales of offshore services and products, land-based revenue tumbled by 2 percent in this geographic segment.

Not only do we expect rising activity levels in the Gulf of Mexico to enable Schlumberger to outperform its peers in the North American market, but this upsurge in drilling should also help to ensure that the global supply-demand balance for deepwater drilling rigs and vessels that collect seismic data should remain tight.