Another Leg Lower for NGL Prices 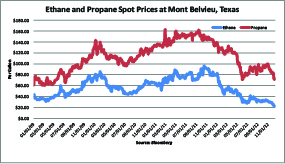 A number of readers have asked about the recent selloff afflicting units of master limited partnerships (MLP). The Alerian MLP Index, which tracks the 50 most prominent energy-focused MLPs, has uncharacteristically given up 5.5 percent of its value thus far in the fourth quarter. In the previous three years, the fourth quarter has been a period of relative strength, with the index rallying 16.6 percent in the final three months of 2009, 9.2 percent in 2010 and 13.9 percent in 2011. 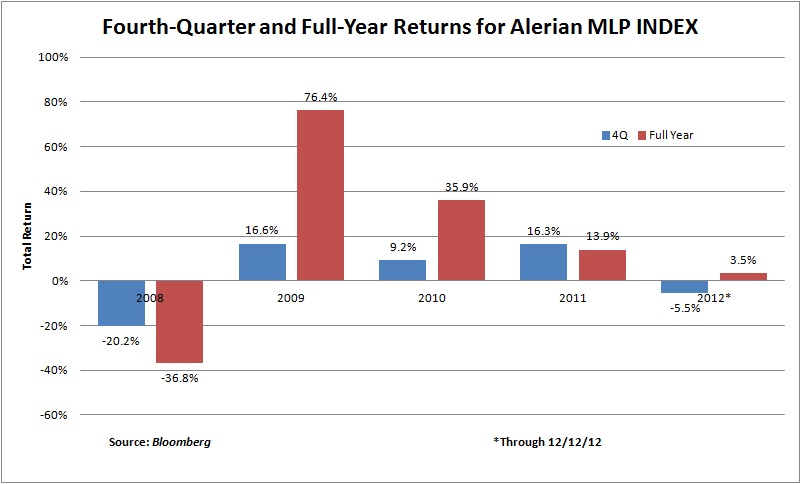 Although we remain bullish on the overall prospects for energy-focused MLPs, we don’t expect the group to stage a repeat performance in the final two weeks of 2012. For one, the group was due for a breather. The Alerian MLP Index hit an all-time high on Oct. 11, 2012, and many names traded above our buy targets in early fall. Some of this recent selloff likely reflects profit-taking ahead of higher tax rates on capital gains and investment income.

NGLs such as ethane, propane and butane are a group of heavier hydrocarbons that occur underground with natural gas (methane). The prices of these commodities, some of which can replace naphtha and other oil derivatives in industrial and petrochemical processes, have traditionally tracked movements in the price of crude oil and help bolster producers’ margins by offsetting weak natural-gas prices.

Producers’ predictable stampede into liquids-rich basins has catalyzed a dramatic upsurge in domestic NGL production. In 2011 overall NGL output hit a record 2.183 million barrels per day, up 22 percent from 2008 and 6.3 percent from 2010. Meanwhile, the December 2012 edition of the Energy Information Administration’s Short-Term Energy Outlook calls for NGL production to hit 2.37 million barrels per day in 2012, a year-over-year increase of 8.1 percent.

Ethane and propane, which accounted for almost 70 percent of US NGL output in 2011, have driven much of this production growth.

This upsurge in production has weighed heavily on these NGL prices in recent months. The spot price for purity ethane at Mont Belvieu, Texas, hit a five-year low of $22 per gallon at Friday’s close, while the price of purity propane dipped to $72.50 per gallon. 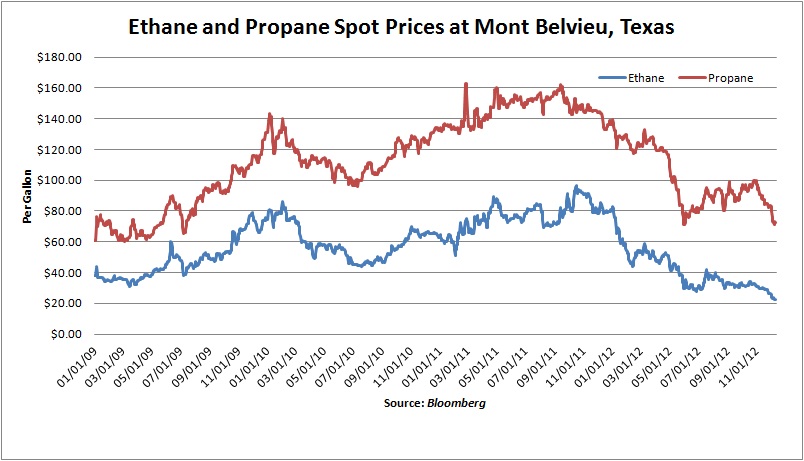 We expect weak ethane prices to persist into the first half of 2013. Although robust production has elevated US inventories of ethane and propane relative to seasonal norms, propane prices should benefit from rising demand for the heating fuel during the winter and additional export capacity slated to come onstream in 2013.

The ethane market, on the other hand, has only two release valves: the domestic petrochemical industry and ethane rejection at gas-processing plants, a phenomenon that occurs when the margins from separating the NGL from the gas stream turn negative.

Depressed ethane and propane prices will likely weigh on upstream MLPs’ distributable cash flow, while publicly traded partnerships that own gas-processing assets will also come under pressure, especially those with contracts that entail significant exposure to NGL prices.

This headwind explains why our index of upstream MLPs has given up 11.9 percent since Sept. 30, 2012, and our index of MLPs that own gathering and processing assets has pulled back by 6.5 percent. In comparison, an equal-weighted index of every energy-focused MLP has last 4.9 percent of its value over the same period.

We regard this selloff as a buying opportunity for conservatively run upstream MLPs such as Linn Energy LLC (NSDQ: LINE) and midstream operators whose growth projects should offset any diminution of distributable cash flow stemming from lower NGL prices.

Meanwhile, oil and gas companies’ overzealous production of natural gas and NGLs has restored the fortunes of domestic chemical producers, an energy-intensive industry that relies on these commodities to generate power and as feedstock. Within this space, olefin producers have benefited the most from trends in the energy patch.

The two most prominent olefins, ethylene and propylene, serve as the basic building blocks for three-quarters of all chemicals, plastics and synthetic fibers. Petrochemical firms produce these commodity chemicals in cracking facilities, the majority of which are located on the Gulf Coast, that heat ethane and propane with steam.

Not only do shares of well-positioned US olefin producers stand to benefit from temporary declines in ethane prices and near-term investments in capacity expansions, but, more important, the group also enjoys a substantial cost advantage over peers with production facilities in Asia and Europe.

Whereas ethane and propane account for about 90 percent of the feedstock used at cracking facilities in the US, petrochemical plants in Western Europe generate more than 70 percent of their ethylene from naphtha, natural gasoline and other petroleum derivatives that hinge on the price of Brent crude oil. We covered our favorite petrochemical names in Hedging Exposure to Lower NGL Prices.