North America is saving the global economy from the economic devastation that would ensue if oil prices were to hit $150 or $200 per barrel.

Global oil consumption last year jumped by about 800,000 barrels per day, while production from countries outside OPEC increased by about 900,000 barrels per day. That is, the global supply-demand balance for crude oil eased slightly, taking pressure off OPEC and providing some cushion against geopolitical supply disruptions such as the sanctions against Iran.

Crude oil prices remain elevated because of tight OPEC spare capacity–idled production that can be brought onstream quickly to balance global supply and demand. This spare capacity effectively functions as an insurance policy for the global oil market, preventing prices from skyrocketing in the event of a supply shock. For example, when the outbreak of civil war in Libya disrupted the nation’s oil exports, Saudi Arabia boosted its production by more than 1 million barrels of oil per day.

OPEC nations account for all of the world’s spare productive capacity, which currently stands at 3.74 million barrels of oil per day–a thin margin when you consider that global consumption averages about 90 million barrels per day. 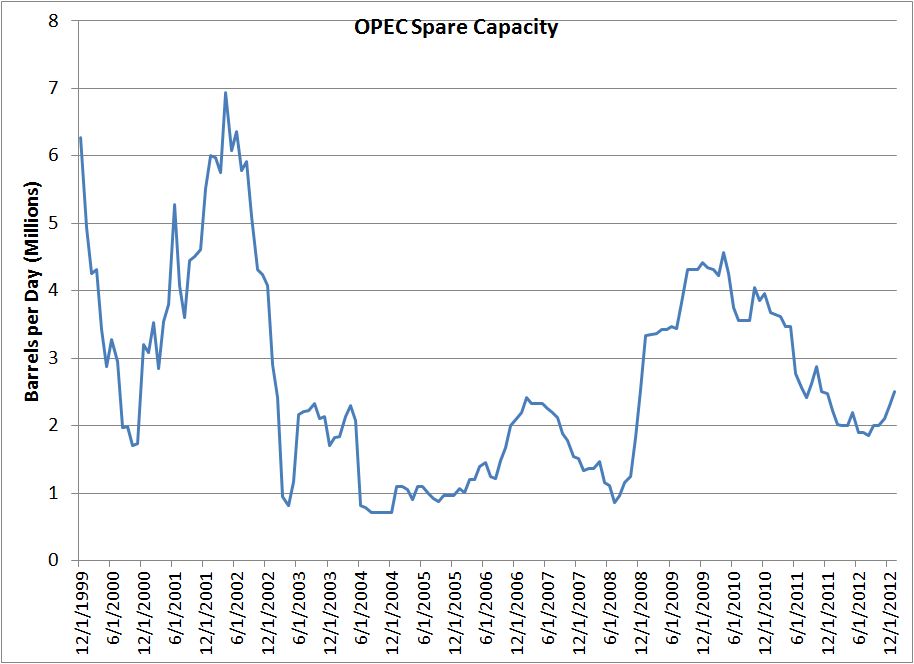 Aggregate demand for OPEC-produced crude oil shrank in 2012, as global consumption failed to keep pace with non-OPEC supply growth in 2012.

Without the production gains in the US and Canada, non-OPEC output would have declined slightly in 2012, forcing the cabal to bring some of its spare capacity online to prevent oil prices from skyrocketing.

Most analysts expect the supply and demand trends that occurred last year to hold in 2013: The IEA current forecast for 2013 calls for global oil consumption to increase by 900,000 barrels per day, with non-OPEC production gains keeping pace with demand growth.

The US is expected to account for substantially all of the incremental growth in non-OPEC oil production, with robust drilling activity in unconventional fields such as the Bakken Shale leading the charge. In effect, the global oil supply and demand balance hinges on production growth in North Dakota and other states with prominent shale oil plays.

The transformation of the domestic energy landscape over the past decade is nothing short of amazing: Not only has the shale oil and gas revolution made the US the world’s leading producer of natural gas, but the upsurge in oil output from these plays has also enabled the country to grow its annual oil output for the first time since the early 1970s.

The effects of the US energy renaissance should redound throughout the economy, as consumers and businesses (especially manufacturing) reap the rewards of cheap American energy.

But investors should remember that this dramatic production growth and the associated economic benefits aren’t guaranteed. Several threats could derail this development and jeopardize non-OPEC production growth.

Oil price realizations are one such headwind. In the Dec.13, 2012, issue of Energy Investing Weekly, Mind the Differentials, we focused on the widening price gaps between various types of crude oil based on geographic location. 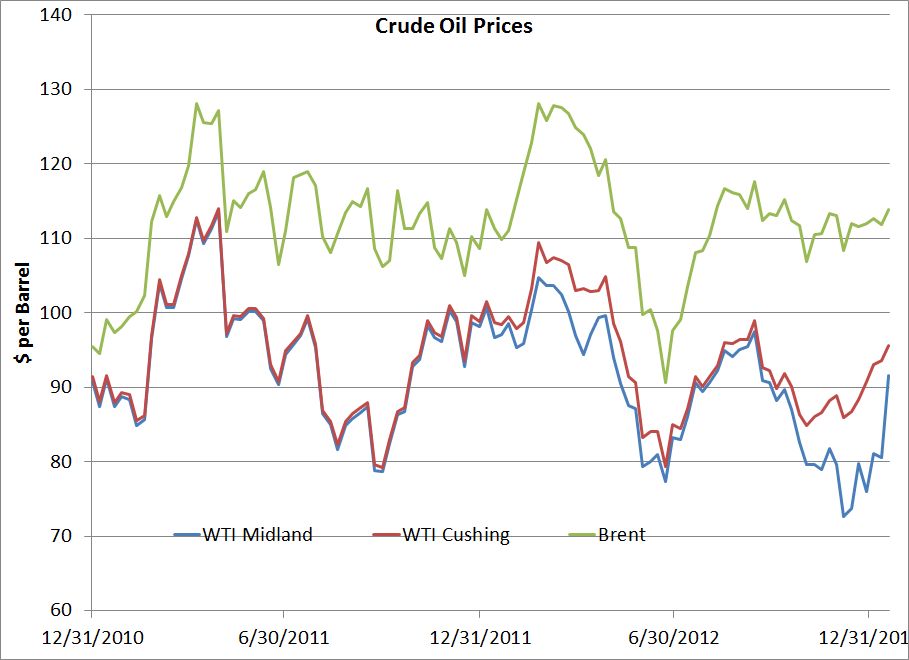 For example, Brent crude oil, a widely watched international benchmark, fetches about $115 per barrel, whereas West Texas Intermediate (WTI) crude oil, the varietal that underpins crude oil futures contracts traded on the New York Mercantile Exchange, goes for $96 per barrel. Given that WTI is of a slightly higher quality than Brent, this almost $20 price differential between the two light, sweet crude oils reflects the glut of oil at the hub in Cushing, Okla. This local supply overhang stems from two factors: growing volumes from the Bakken Shale and other plays; and limited takeaway capacity to transport the crude oil to the refinery complex on the Gulf coast.

The combination of rising production from unconventional fields and pipeline capacity constraints has driven significant divergences between oil prices at various regional delivery hubs. For example, insufficient midstream capacity meant that WTI delivered to Midland, Texas, in the fourth quarter traded at a $15 discount to WTI transported to Cushing. Meanwhile, both types of WTI have traded at an unusually large discount to Louisiana Light Sweet crude oil, a varietal of similar quality that’s delivered to the Gulf Coast.

Widening basis differentials drove the fourth-quarter decline in the number of rigs actively drilling in the Bakken Shale of North Dakota. 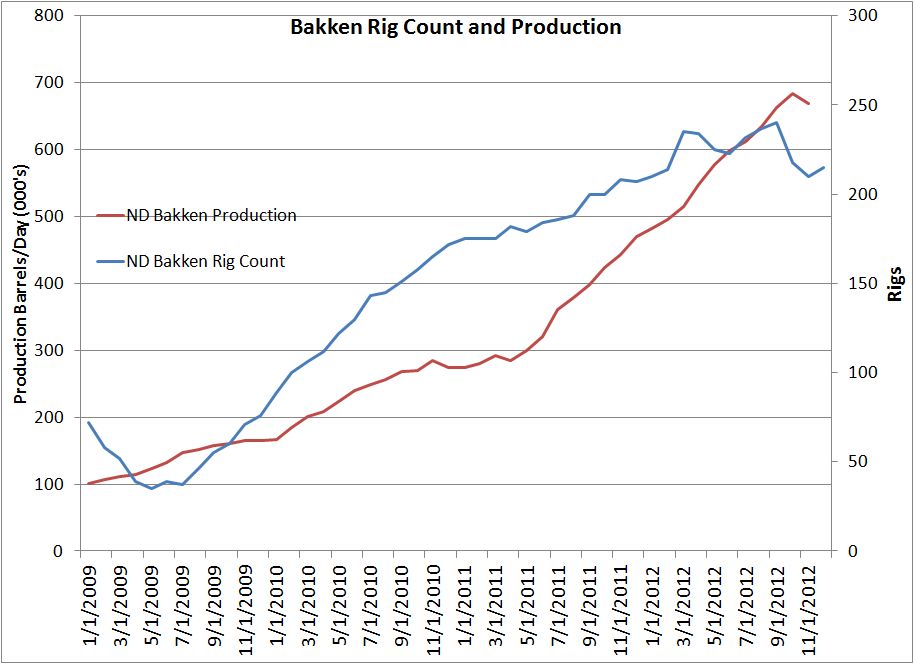 Although Brent crude oil continued to hover between $107 and $115 per barrel in the fourth quarter, WTI tumbled from almost $100 per barrel in mid-September to the mid-$80s per barrel in early November. Producers that deliver their output to Midland or Clearbrook, Minn., received even lower prices.

In September 2012, upstream operators ran a record 240 drilling rigs in the North Dakota portion of the Bakken Shale. Faced with falling oil prices, widening differentials and spending that exceeded cash flow, producers reined in their horns: By the end of November, the rig count had dropped to about 200 in the Bakken Shale.

As we noted in our Deep Dive into Schlumberger’s (NYSE: SLB) Fourth Quarter, the final three months of 2012 were marked by a significant decline in demand for hydraulic fracturing and other products that enable producers to exploit shale oil and gas resources.

Production responded to this reduced activity. For the first time since March 2011, output from North Dakota’s portion of the Bakken Shale fell on a month-over-month basis. The last time producers stopped adding rigs in the region, oil output also flattened.

Some pundits have warned that surging production from US shale plays will overwhelm global demand growth over the next few years, depressing the price of crude oil. However, North American upstream operators in the fourth quarter demonstrated their willingness to curtail drilling activity in response to lower oil prices. Without strong output growth in the US, global oil prices would be significantly higher than they are today.

These trends have several important implications for investors. First, crude-oil differentials in North America have narrowed since late 2012, as new takeaway capacity has come onstream to transport production from inland fields to the Gulf Coast. These new pipelines should help to reduce, but not eliminate, the regional supply imbalances that plagued producers in the fourth quarter. This is great news for producers and several of the high-yielding US royalty trusts that sell oil in Midland or Cushing.

Meanwhile, we expect the price of Brent crude oil to remain elevated relative to WTI and other inland US benchmarks, supporting strong drilling activity in Asia, Africa and the Middle East–a boon for the oil-field services industry and contract drillers that specialize in offshore developments. Investors should also favor producers that have significant exposure to Brent crude oil.