A Tale of Two Energy Commodities: The Intertwined Fortunes of Coal and Natural Gas

Coal-mining giant Peabody Energy Corp (NYSE: BTU) reported strong third-quarter results on both the top and bottom line, thanks to enterprise-wide cost reductions and better-than-expected sales volumes of coal produced from its mines in the southern portion of Wyoming’s Powder River Basin.

Third-quarter revenue came in at $2.1 billion, trumping the Bloomberg consensus estimate of $1.99 billion. Peabody Energy’s adjusted earnings before interest, taxation, depreciation and amortization (EBITDA) of $460 million likewise blew away Wall Street’s consensus forecast of $367 million and even surpassed the high end of management’s prior guidance, which called for adjusted EBITDA of $450 million.

Peabody Energy also issued bullish full-year guidance, projecting that earnings per share (EPS), adjusted for a tax benefit, would hit $1.88 to $2.08, compared to consensus expectations for EPS of $1.81. The company now expects adjusted EBITDA to range between $1.75 and $1.85 billion in 2012, higher than the Bloomberg consensus estimate of $1.81 billion.

Management’s upbeat comments during the conference call about the broader outlook for coal prices and demand were more interesting than the headline results themselves. In particular, CEO Gregory Boyce and his team indicated that supply and demand conditions coal have become more favorable in the US and Europe.

The price of domestic thermal coal, the varietal burned in power plants, pulled back significantly in the wake of the no-show winter of 2011-12, as the unseasonably warm winter devastated heating demand and elevated utilities’ coal inventories. To worsen matters, coal-to-gas switching among utility customers impeded any recovery in US thermal-coal prices.

For much of the past two decades, coal has been the least expensive thermal fuel in the US. But rising production from the nation’s prolific shale oil and gas plays has ensured that natural-gas prices have declined steadily since early 2010. This upsurge in output, coupled with a paucity of demand during the 2011-12 winter, sent the fuel spiraling to a 10-year low of $1.90 per million British thermal units (mmBtu) in late April 2012.

In this challenging price environment, utilities with the flexibility to adjust their generation mix opted to burn more natural gas and reduce coal consumption. 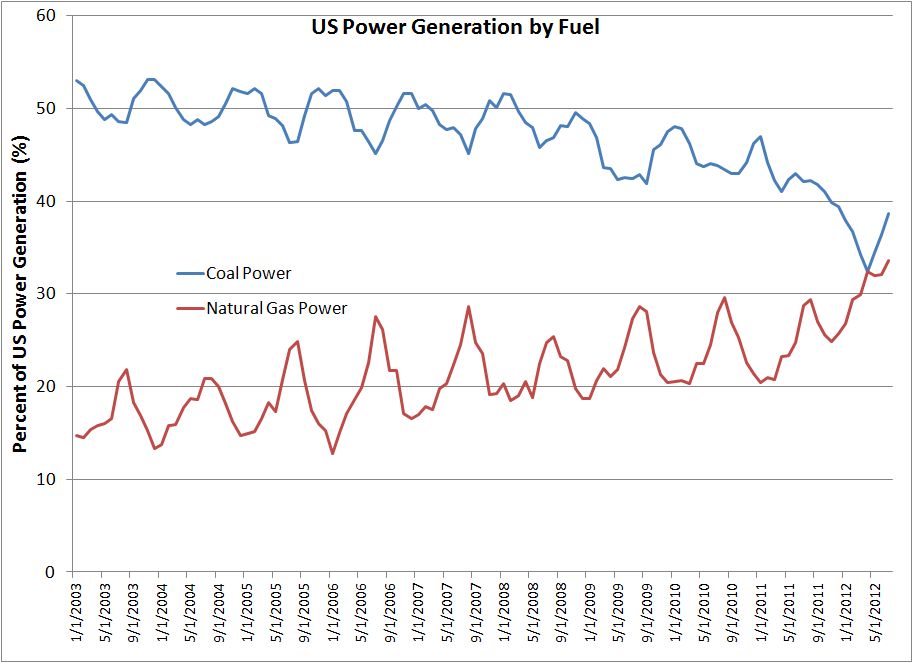 In April 2012, thermal coal accounted for about 32 percent of US electricity generation, down from an average of 50 percent between 2003 and 2007. Last spring marked the first time in history that US utilities produced as much power from natural gas as they did from coal.

Predictably, this wave of coal-to-gas switching prompted some to opine that this shift in feedstock–the product of anomalous market conditions–would prove permanent. In a lengthy article posted to Seeking Alpha in late June, we argued against this shortsighted logic:

[I]nvestors shouldn’t assume that the recent bout of fuel-switching marks the end of king coal. For one, two consecutive colder-than-average winters in 2009-10 and 2010-11 helped eliminate the utilities’ supply overhang in the wake of the financial crisis and Great Recession.

Meanwhile, even if natural gas production maxes out domestic storage capacity in early fall and the price of the fuel plummets, those prices aren’t sustainable over the long haul; natural gas prices eventually will rise to levels that make thermal coal more attractive to electric utilities. At that point, fuel switching will reverse course.

Evidence is mounting that rising natural-gas prices have enabled thermal coal to regain some of its lost market share.

The price of natural gas has almost doubled from its April 2012 low to recent highs of more than $3.60 per mmBtu. Although this spot price remains near the bottom of the fuel’s 10-year range and is unlikely to incentivize drilling in dry-gas basins, the upward move does restores thermal coal’s economic advantage as a fuel for electricity generation. 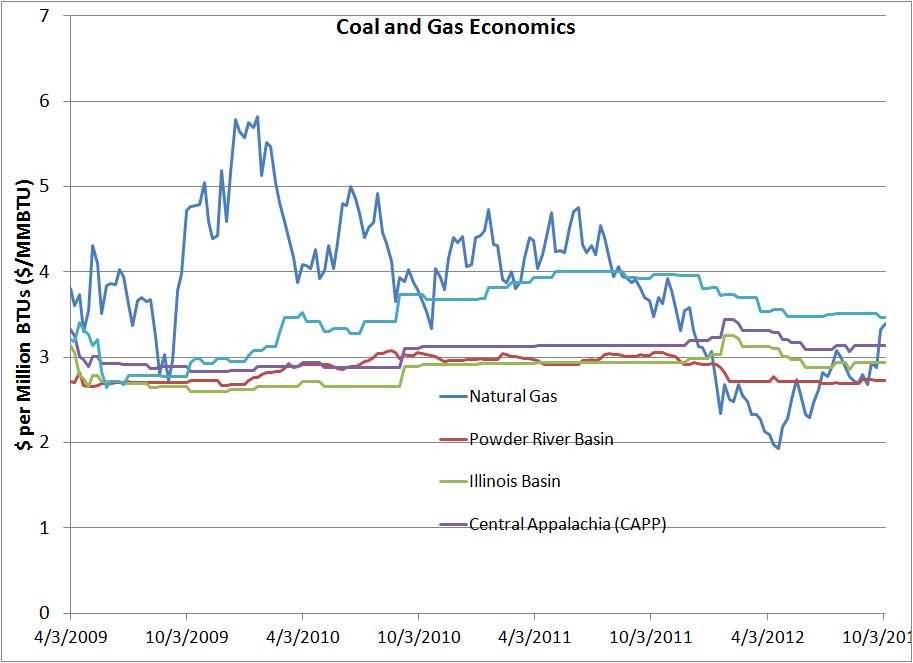 Thermal coal from the Powder River Basin in the western US becomes competitive with natural gas when natural gas fetches more than $2.50 per mmBtu to $2.75 per mmBtu, while the inflection point for output from the Illinois Basin when gas prices hit $3.25 per mmBtu to $3.50 per mmBtu. Coal producers that operate in Central and Northern Appalachia will see some relief if natural gas eclipses $4.00 per mmBtu.

With natural-gas prices climbing, fuel switching among utilities has started to reverse course; at the end of July (the most recent month for which data is available), coal accounted for roughly 39 percent of US electricity generation. Coal has likely continued to regain market share in subsequent months.

Thermal coal from the Powder River Basin, a region that boasts the lowest production costs, has started to show signs of increasing demand among utility customers. However, this recovery has yet to benefit Central and North Appalachia, a mature region where operating costs are significantly higher. In a conference call to discuss third-quarter earnings, Peabody Energy’s management team noted that generation at power plants using Central Appalachian coal has tumbled 40 percent thus far in 2012, while burn from other regions is off by only 10 percent. In addition, utilities that consume coal from the Powder River Basin currently have 70 days to 80 days of supply on hand, compared to more than 120 days’ worth of inventory at power plants that burn coal from Central Appalachia.

The company estimates that US coal demand will contract by 120 million tons in 2012, with fuel switching in the first half of the year accounting for roughly 100 million tons in lost consumption. In short, the industry has weathered the worst of the demand destruction. Peabody Energy’s management team expects demand for thermal coal to rebound by 30 million to 40 million tons in 2013, largely because of gas-to-coal switching at the nation’s electric utilities.

Management also expects the US market for thermal coal to receive some relief on the supply side, as producers shutter higher-cost mines in Central Appalachia and even reduce output in the Illinois Basin and the Powder River Basin. Meanwhile, bankruptcies have also led to involuntary supply reductions. For example, Patriot Coal on July 10 filed for bankruptcy protection, sunk by a major customer default and plummeting cash flow.

Although US coal stockpiles remain elevated relative to long-term averages, Peabody Energy’s management team estimates that declining output and gas-to-coal switching helped reduce inventories at an accelerated pace that was 70 percent faster than average in the third quarter. Coal stockpiles won’t normalize for a few more quarters, but barring another exceptionally warm winter, the US market for thermal coal has bottomed and the supply-demand balance will continue to improve.

An uptick in exports has also provided a much-needed release valve for excess coal supply. In 2012 total US coal exports are expected to reach 125 million short tons, surpassing the previous record (set in 1981) of 118 short tons. 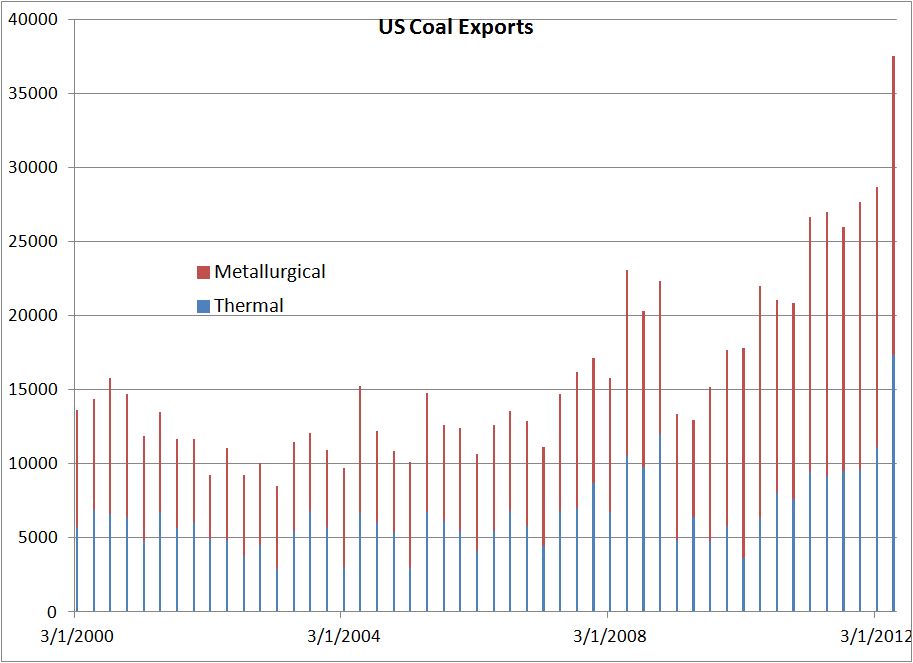 In the second quarter, international shipments of thermal coal soared 90 percent from year-ago levels, compared to a 13 percent uptick in exports of metallurgical coal, the varietal used in steelmaking.

These developments don’t bode well for natural-gas prices. Although the price of natural gas has recovered to depressed levels from ultra-depressed levels, we do not expect the oversupplied commodity to enjoy a significant, sustainable rally in the next two to three years.

Meanwhile, the decline in the US gas-directed rig count won’t provide as much relief on the supply side as some bullish commentators expect. 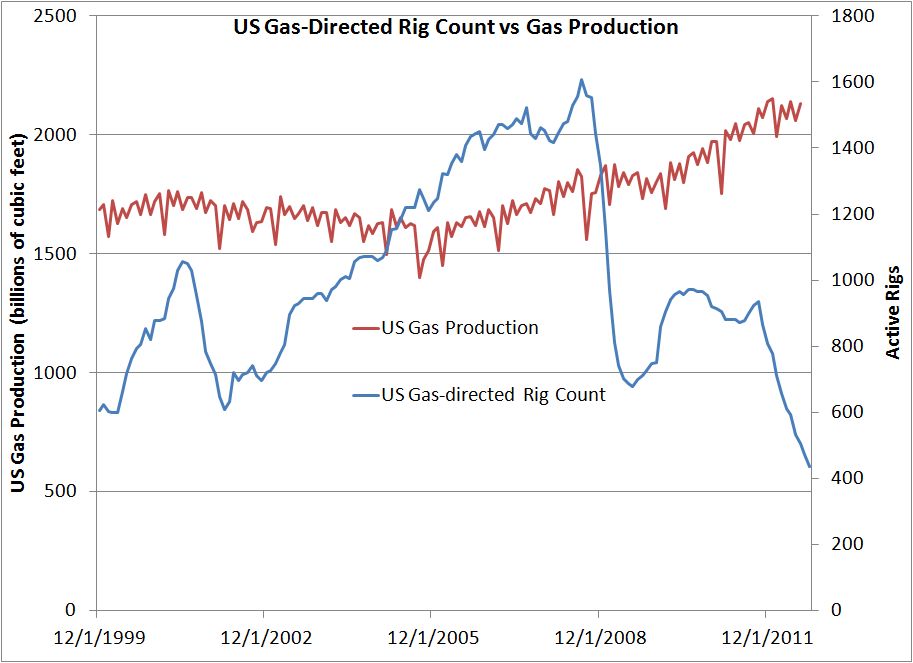 The US gas-directed rig count has plummeted from more than 1,000 rigs in 2010 to 427 units–the lowest number since March 1999. We expect producers to continue to reduce the number of operating rigs in basins that primarily produce natural gas; even with the recent rally, prices haven’t recovered to levels that incentivize production. Anecdotal evidence also indicates that some producers are holding off on completing drilled wells until natural-gas prices recover.

Under normal circumstances, one would expect such a sharp decline in the gas-directed rig count to yield a commensurate drop in output. However, rising natural-gas output from wells in shale oil plays and upstream operators’ increasing efficiency in unconventional basins thus far have offset reduced activity in fields that primarily produce natural gas.

Through the end of July, only the rate of production growth had slowed. Moreover, the October 2012 edition of the Energy Information Administration’s Short-Term Energy Outlook calls for US marketed production of natural gas to increase by 3.9 percent in 2012–well off the 7.9 percent upsurge that occurred in 2011.

We see two challenges that should keep the price of natural gas depressed over the next two to three years. Not only would natural-gas prices of $4 per mmBtu to $4.50 per mmBtu prompt utilities to accelerate gas-to-coal switching, but such a rally would also prompt producers in the Marcellus Shale and other plays to ramp up production in an effort to take advantage of increased prices.

For these reasons, we expect the price of natural gas to remain range-bound for the next two to three years. Bullish commentators who cite plans to export liquefied natural gas from the US forget that the first of these capital-intensive projects won’t come onstream until at least 2015.

At the same time, only another unseasonably warm winter would cause Henry Hub prices to retest their 2012 lows. We expect the declining rig count to put a floor under gas prices of about $3 per mmBtu.

Rather than focus on shares of exploration and production outfits that primarily produce natural gas, we see more investment opportunities among coal producers in the intermediate term.

Investors seeking exposure to natural gas should focus on producers such as Linn Energy LLC (NSDQ: LINE) and Vanguard Natural Resources LLC (NYSE: VNR) that have scooped up gas-producing properties at fire-sale valuations. These acquisitions generate a solid return on investment in the current price environment and provide significant upside exposure when the price of natural gas eventually recovers.